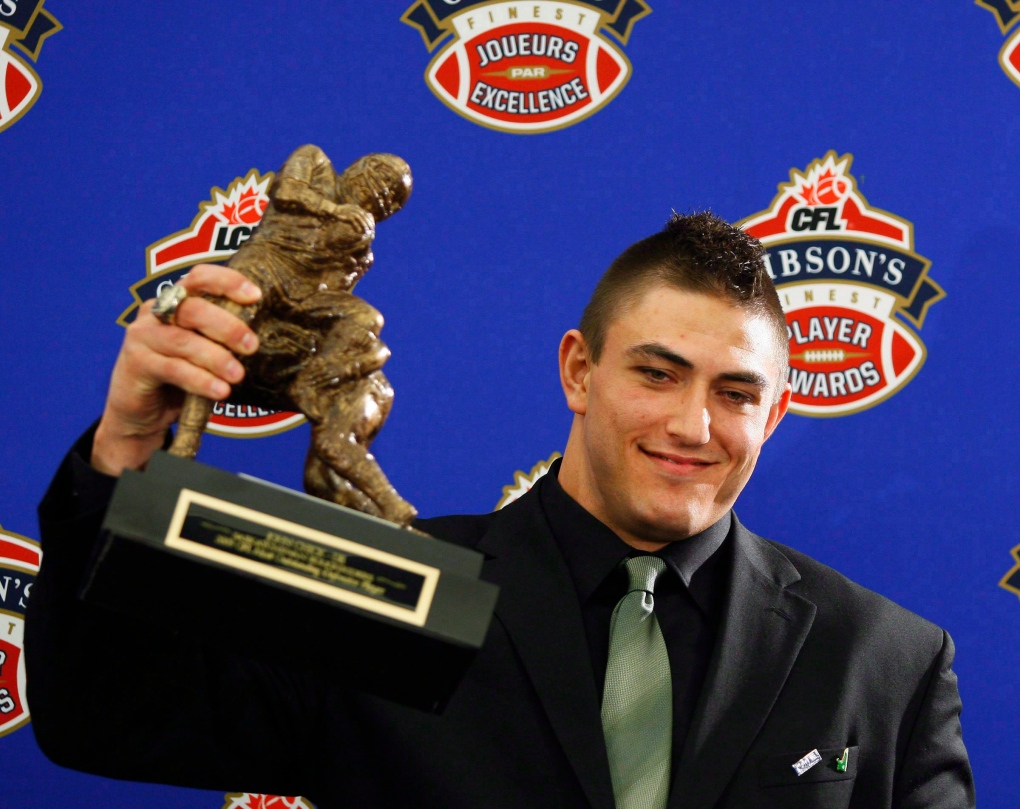 John Chick holds his trophy for the CFL Most Outstanding Defensive Player during the 2009 Gibson's Finest Players Awards in Calgary on Nov. 26, 2009. John Chick is returning to the Canadian Football League. The free agent defensive end agreed to terms with the Saskatchewan Roughriders on Saturday, The Canadian Press has learned. THE CANADIAN PRESS/Jeff McIntosh

Saskatchewan Roughrider John Chick believes in dreams, even while tackling a life-changing disease.

The 250-pound, six-foot-four defensive end is a Type 1 diabetic, meaning he needs insulin to stay alive.

"Most people just know me as a football player, but it's something I deal with. I wear an insulin pump both on and off the field," said Chick.

The pump Chick wears is about the size of a cellphone. A thin tube runs from the pump to what is called the infusion site -- the spot on the body where a tiny plastic catheter goes under the skin and delivers a steady amount of insulin. Chick programs the pump to give more insulin when he eats.

Chick says the pump and another device that attaches to him to monitor his glucose have help him live "somewhat normal."

Surprisingly, he says the pump usually doesn't get pulled off during a game.

"The machine itself is just in the waistband of my shorts, my undershorts. It stays pretty good there. It's been hit a number of times," he said after a recent practice at Mosaic Stadium in Regina.

Occasionally, the tiny plastic catheter will get pulled out, he says, but putting it back is no big deal.

Chick was diagnosed as a diabetic when he was 14-years-old and admits it made him question his future in football.

"It definitely put doubt in there at first, frustrating, you get the 'why me,' and that's not just with the diabetes. You know, everyone asks those questions when something real happens and so those were my initial thoughts," he said.

The Utah State graduate helped the Riders win the Grey Cup in 2007. He was the CFL's top defensive player in 2009 before signing with the NFL's Indianapolis Colts in 2010. He spent the next two seasons with the Jacksonville Jaguars before returning to Saskatchewan this year.

In partnership with the CFL, Sun Life -- a sponsor of the players' association -- will make a $101 donation to the Juvenile Diabetes Research Foundation every time a successful field goal is kicked during the regular season, up to $40,000.

Canadians can also 'donate a kick' online and Sun Life will then donate an additional $10,000 to the Juvenile Diabetes Research Foundation in the city with the most donated kicks.

Chick is optimistic a cure can be found. He says the technology has already made leaps and bounds.

In the meantime, Chick says living with diabetes has been a growing process, "a few steps up, a couple steps back sometimes." But he believes in being persistent and wants to share that story.

"You know when I was a kid, I grew up in a smaller town and you didn't hear of too many diabetics doing this or that, though there always have been," he said.

"Everyone's got a limit on something whether it be diabetes or a number of any things, someone's got something that they've got to overcome. For me, I just want to be that guy that says 'Hey, you can do it.' Not everyone's born to play football, but whatever your dream is, you can do it.' "