REGINA -- A group in Regina continued a nationwide protest in support of the Wet’suwet’en Hereditary Chiefs, organizing a round dance on Albert St.

Nearly 100 people blocked traffic near the Albert St. Bridge on Saturday evening. This was the second week in a row that protesters took to one of Regina’s busiest streets to rally against the Coastal GasLink Pipeline in northern British Columbia.

“They denied having a pipeline running through their backyard, as would I’m sure any other person,” said Tracie Leost, a participant at the round dance.

“It's a positive way for us to come together and use our ceremony and our dance to send love to a nation fighting something really, really, really difficult.”

Police were on scene blocking off the entirety of the Albert St. Bridge, a move protestors felt muted their message to the public. Later they marched past the barricades, to the intersection of Albert St. and 14 Ave. 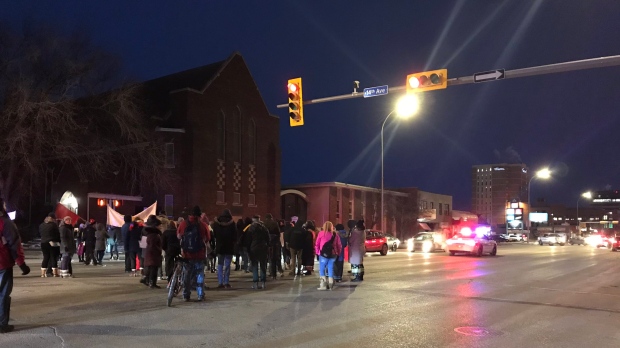 “The whole purpose of it is to cause discomfort, to cause inconvenience. Because when you're doing that and you're right in the face of the public, then they can get mad at you, they can hate you, but they see you,” said Wendy Lynn, one of the protesters.

There is not yet any word about plans for another protest next week.