The 31st annual Canadian Cancer Society Run for the Cure took place at Douglas Park on Oct. 2nd for the first time in two years.

The previous two runs were held virtually due to the COVID-19 pandemic.

Event organizers like Aurora Marinari said around 700 people participated in the event raising over $200,000.

“That number will keep rising as more and more organizations and participants fundraise throughout Breast Cancer Awareness Month,” Marinari said.

This year’s event included a five kilometre run and walk, and a parade of hope where cancer survivors wearing pink walked together while being cheered on and being applauded on their bravery, determination, and courage. 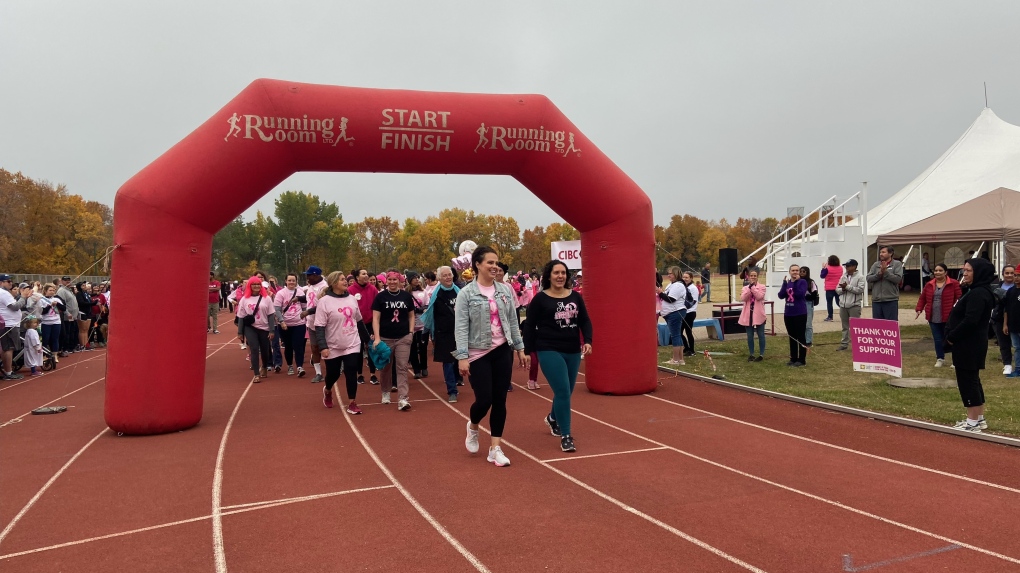 “Everybody wearing that pink shirt behind me they have all survived, they have all fought the battle, and they know what its like,” McAveny explained. “That's something to be celebrated.”

Ludnik and McAveny both agree it is vital to spread and bring awareness to the disease.

“It's really important for me to, I feel like share my voice and participate and raise awareness for breast cancer in young women,” Ludik said.

“I'm here now as a survivor, and I'm here just because I want to help raise funds and get the word out about my story and many of the challenges that people face as a survivor,” McAveny said.

Both women are advocating for more awareness that breast cancer is being found in younger women and men.

“Prior to my diagnosis, I had asked for some screening and I was told I was too young,” Ludik said. “So my cancer went undetected for longer than it should have.”

Ludik and McAveny have both spoken at breast cancer awareness events telling their stories encouraging woman to get checked often and early.

“I was diagnosed at 36,” McAveny said. “When you're that young, they tell you no, it can't be that and you need to be your own advocate and realize that it can happen at any age now.”

Ludik adds the breast cancer community is Regina has supported her since she began her journey and now she is just giving back.

“I want to give back to other women,” Ludik said. “Giving them the same kindness and support that I was shown early in my diagnosis.”

Organizers say the Run for the Cure event hopes to inspire others to raise awareness about breast cancer.

“We have the survivors, they stand out in their pink shirts,” Marinari said.

“You see the numbers of them together, you see that they are survivors and it's just the whole event is about celebrating that.”

The Bank of Canada lost $522 million in the third quarter of this year, marking the first loss in its 87-year history. In the central bank's latest quarterly financial report, it says revenue from interest on its assets did not keep pace with interest charges on deposits at the bank.

An Ontario court has struck down a controversial bill that limited wages for public sector workers. Several unions and workers affected by Bill 124 have been fighting the legislation that came into effect in 2019.

A disciplinary case was opened against Croatia at the World Cup on Tuesday after the team's fans taunted a Canada player with Serbian family ties.

A new report from Royal LePage shows 75 per cent of U.S. citizens living in border towns and owning recreational properties in Canada made their purchase after the federal government announced its forthcoming foreign buyer ban.

A new report predicts average home sale prices in Canada will fall 3.3 per cent next year with the biggest declines expected in Ontario and Western Canada where some markets may see prices fall 10 to 15 per cent.

King Charles' whirlwind three-day trip to Canada in May 2022 cost Canadian taxpayers at least $1.4 million, or well over $25,000 per hour, according to documents obtained by CTVNews.ca.

Edmonton mom says she was beaten, robbed in random attack outside LRT station

An Edmonton mom opened up about a random attack while she was waiting for a train that left her bruised, concussed and questioning whether it's safe to take transit in the city.

An Independent Alberta MLA has been ordered to pay $1,500 for each day he spent trying to break into the province's vaccine portal to prove the website wasn't perfectly secure, a judge ruled on Tuesday.

Prime Minister Justin Trudeau says everyone in China should be allowed to express themselves amid protests over severe COVID-19 restrictions.