REGINA -- Two members of the Swift Current Broncos are living out a rare opportunity.

Brothers Kaleb and Aiden Bulych are suiting up together in the WHL.

“Doesn’t happen very often where two brothers get to play in the same league, let alone the same team,” Aiden, the younger of the two siblings, said.

Aiden was drafted by the Prince Albert Raiders in 2016, while older brother Kaleb was selected by the Vancouver Giants in the second round in 2015. However, they spent a large portion of their junior hockey careers in different leagues, as Aiden started with the Yorkton Terriers in the SJHL.

The two were born 22 months apart, so they played together on minor league teams every other year growing up in Foam Lake.

Aiden, a left shot forward, signed a standard player agreement with the Swift Current Broncos after being named the SJHL rookie of the year in 2019. A few months later, Kaleb – a right shot defenseman – was traded from Vancouver to Swift Current and the two were reunited. 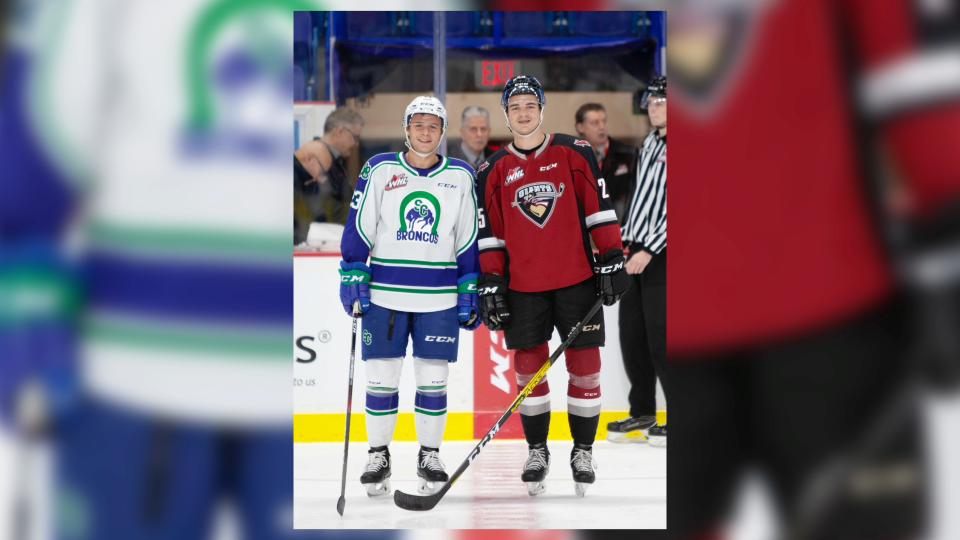 Brothers Aiden (left) and Kaleb Bulych pose the first time they met in a WHL game. The two are now teammates with the Swift Current Broncos. (Supplied: Vancouver Giants)

“It’s definitely nice to have a relative here that can help you through those lower times and be with you when you’re a little bit higher, too,” Kaleb said.

Aiden is currently third on the Broncos for points, with four goals and seven assists in 11 games. Kaleb patrols the blue line. The positional differences proved useful growing up on a farm outside of Foam Lake.

“Whenever one of us was struggling with something you could always mimic things that he would do to help us out and make us better players,” Kaleb said.

In 2019, when Kaleb was in the third of four years with the Vancouver Giants, the team came within one goal of winning the WHL championship. In game 7 of the WHL finals, the Prince Albert Raiders beats the Giants 3-2 in overtime. Half of the series was in Prince Albert, meaning the Bulych family could be part of the experience.

The duo’s Grandma sat in the Raiders parking lot until 12 a.m. one night to make sure the family got tickets the following morning so they could support Kaleb.

“It was right in the middle of seeding time, too. My Dad stopped the tractor and [went] off to P.A. to watch me play, so it was pretty cool to get that experience and it probably won’t ever happen again,” Kaleb said.

In 2017, Kaleb was invited to the Vancouver Canucks development camp. He also attended the Carolina Hurricanes camp the next year.

“It’s easy to get mixed up in the emotion part of it to push for things to happen a little bit faster but I think for me it’s just doing the little things everyday,” Kaleb said.

This year is Kaleb’s final year of junior hockey and he’s grateful for the opportunity to play it with Aiden.

“Nobody knows our future so for us to get my last year and this last year of mine to play with each other has been pretty cool and pretty special,” Kaleb said.

There are just 12 games left for the Broncos in the Regina hub. At this point, hockey is relative.

“This shortened season we don’t have very much more time together,” Aiden said. “Trying to enjoy it while it lasts.”