REGINA -- Two Saskatchewan businesses are offering unique party ideas for the residents of Saskatoon and Regina.

Picnique is a sister run business that specializes in luxury picnics.

“My sisters and I had always planned to start a business together, it’s something we’ve been wanting to do for a while and we came across this and thought it would be a great experience to bring to the people of Saskatchewan,” Jana Okraintez, owner of Picnique, said.

The business also partnered with other local companies in both Saskatoon and Regina to provide charcuterie boards and chocolate covered strawberries.

“They have been amazing and so supportive. We couldn’t have asked for better partnerships,” Okrainetz said. “There are more to come too with photographers and floral shops and we are looking forward to that.”

Okrainetz said the company launched last week so it hasn’t felt much of the strain of the COVID-19 pandemic.

“We have had steady bookings. We haven’t really had to deal with the really strict restrictions, but we have a lot of people looking to book later in the summer when things are going to be opening up a little bit more,” she said.

“Right now we are restricted to 10 people gathering outside, but people are booking in larger groups in anticipation that that will change.”

YXE Slumber Party has also been busy. The company provides themed slumber party rentals that include tents and decorations.

The idea was born when Sadoway’s daughter wanted a slumber party for her seventh birthday.

“I thought initially that they would just wear pyjamas, we would have a waffle bar for dinner, maybe watch a movie, play some slumber party games. So I took to Pinterest and then I found the slumber tents,” she said.

Sadoway said she started out by making just four tents and now has 28. 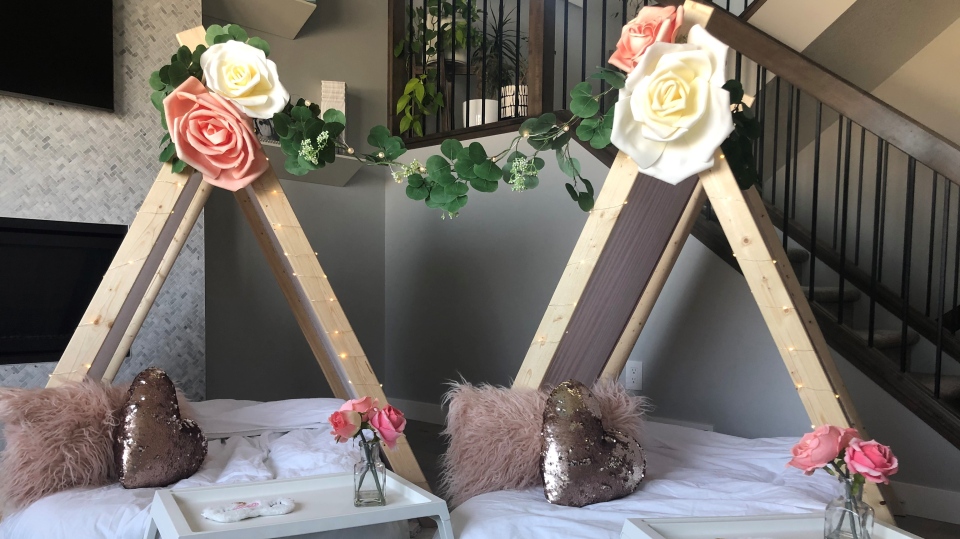 “It was an accidental business. Now I’m in Saskatoon and Regina so it’s kind of crazy.”

YXE Slumber Party has five themes with the most popular being “Neon Dream,” which includes black-light canopies that glow.

“The kids go nuts for it,” said Sadoway.

After opening the business in February 2020, the pandemic derailed parties planned in March, April and most of May. She cautiously reopened YXE Slumber Party after the May long-weekend last year and has been steadily busy ever since.

“I’m sold out pretty much every weekend and we just added more tents again,” Sadoway said.

She said the bookings have been for smaller groups since the pandemic started, but is hopeful the parties will be bigger once restrictions are lifted.

Parties from both companies can be booked on their websites at www.saskpicnique.com and www.YXEslumberparty.ca.