Regina clothing company Hugo+Toast allocates 10 per cent of profits from each sale towards the Canadian National Institute for the Blind’s (CNIB) guide dog program.

“Each service animal is upwards of $50,000 so a lot of help and funding was needed to get these service animals to the people who need them,” said Dressler.

The company is women run by Dressler and Sydney Notschaele, who handles marketing, and is funded by the Women Entrepreneurs of Saskatchewan (WES).

Hugo+Toast’s business model is based around bringing smart dogs to humans in need. 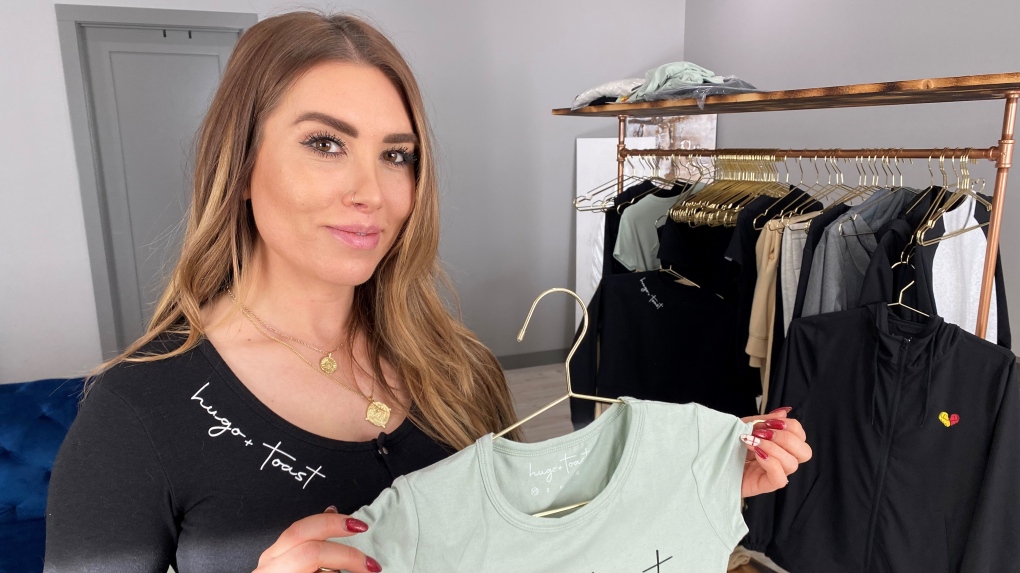 Karlissa Dressler, owner of Hugo+Toast with an item of the clothing line. (Gareth Dillistone/CTV News)

Dressler’s interest in service animals came from her struggle with postpartum depression. She says their dog Toast, who was around six months old at time, helped her through it by always being by her side.

This led to Toast being assigned to her as an emotional support animal and they went through special training on their own.

“He really helped me with my anxiety and the hard times that I was going through and I just kind of got to thinking like what about people who need this to live every single day like how hard that would be,” Dressler said.

CNIB said guide dogs are provided to people who are blind or partially sighted in Canada free of charge, and the foundation relies solely on donations from the public to be able to raise, train and support guide dogs and the handler.

Ashley Nemeth, manager of programs and operations at CNIB, said training a guide dog is a long process starting with specific breeding and puppy classes at eight-weeks-old.

Nemeth said it is amazing to know there are companies out there like Hugo+Toast who see the value in the guide dog program.

Hugo+Toast is loungewear for both men and women designed by Dressler and Notschaele with the idea of creating clothes as soft and snuggly as the best friends who inspired it.

The items are made out of bamboo and cotton.

“I’m someone who, number one, I overheat in a lot of things and I find the bamboo is really cooling, especially during my pregnancy, and it’s really expanded with me as I’ve grown from the beginning of my pregnancy to this nice round bump,” said Meagan Vaughan, a Hugo+Toast customer.

Vaughan is also considered an influencer and has posted photos of herself in the items on her social media. This is the company’s main way to spread the word while they work to get into retailers.