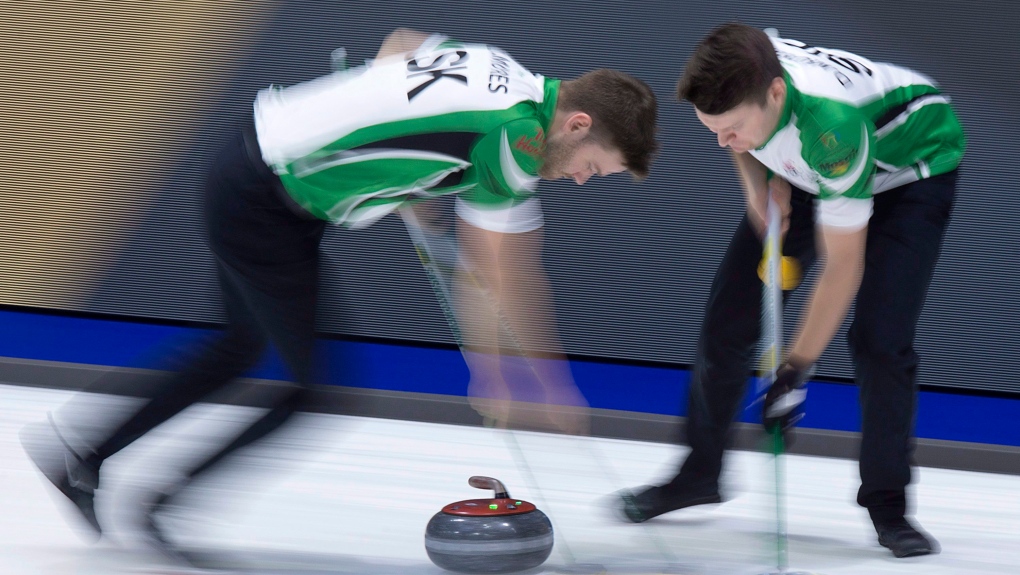 REGINA -- Team Saskatchewan’s 2020 Brier bronze medal curling team is getting a shake up.

Muyres, who has been skipping the past two seasons, will play second for Dunstone, joining third Braeden Moskowy and lead Dustin Kidby.

Skip Matt Dunstone says the team recruited Muyres because of his experience, but also the belief Muyres can help them earn a spot at the Beijing 2022 Olympics.

“His overall skill set and what he brings to a team, we feel like we have the opportunity to take that next step forward. It not only gives us a chance, but gives ourselves a really good chance at winning those (Olympic) trials in Saskatoon,” Dunstone said.

Muyres spent six seasons playing third for Steve Laycock (2012-2018), and then skipped his own own squad the last two seasons. He says it was a tough decision to leave his teammates, including his brother Dallan Muyres, to join Team Dunstone.

“Sleepless nights that you’re thinking of what to do and what makes sense,” he said. “I think it went back to what’s my goal in the game the next five to six years. It’s to win the Brier and win an Olympic Gold for Saskatchewan.”

Muyres and Dunstone faced off in the last two Saskatchewan men’s curling provincial finals. Muyres won in 2019, and Dunstone won in 2020. However in 2018, Dunstone and Muyres played together and represented Saskatchewan at the Brier in Regina with Steve Laycock.  Muyres admits he was surprised to get the call from Dunstone.

“You’re always honoured when somebody asks you to join their team. You’re a little bit surprised, you didn’t see it coming. But all in all, it was a sense of respect,” he said.

Team Dunstone announced earlier this week they were parting ways with second Catlin Schneider. The front end sweeper had been with Dunstone since 2018, helping the foursome win the Master’s at the Grand Slam of Curling in October 2019.

Schneider was stunned by the news.

“It is without a doubt shocking, but I wish them the best and I look forward to a fresh start,” he said.

Dunstone says it was a team decision to let Schneider go, so they could recruit Muyres.

“We had a lot of big moments with him (Schneider). The reason was plain and simple, with the Olympic trials two years away we are trying to put ourselves in the best position to try and have the maximum amount of success. That’s the motivation behind the decision,” Dunstone said.

The other motivation behind the decision: Colton Flasch. The 2019 Brier Champion played second for Team Kevin Koe, but was released on March 16. Dunstone felt that would create a ripple affect.

“We knew as soon as Flasch was coming back to Saskatchewan that the writing was on the wall,” Dunstone said. “We figured there was going to be some shake ups. We prepared, got ahead of the game.”

“It goes back to Kirk and his traits and what he brings to a team. That’s just something that we saw in Kirk more so than the other possible people.”

Team Dunstone should have been curling in Toronto at the Players Championship this week, but due to the COVID-19 pandemic, all remaining curling events in the 2020 season were cancelled. Dunstone says given the circumstances surrounding the virus, their decision to change the roster was accelerated by a month.