Samantha Ridgewell is playing with the Toronto Six, the only Canadian team playing in the National Women’s Hockey League (NWHL).

“When I found out they were expanding to Canada I was like, okay this is a serious option to consider,” Ridgewell said.

The NWHL is made up of six teams that are currently competing in a bubble in Herb Brooks Arena in Lake Placid, New York. It is a round-robin format, with teams playing each other and then being re-seeded based on their results.

Ridgewell said like most of her teammates, before her first game on Jan. 23 she had not played a meaningful game in almost a year. Depending on how the Six does, the team could play nine games in 12 days.

“I think there was one time last year where we had four games in one week. Everybody was so exhausted after that week. We were like, we need a week off of hockey our bodies are dead,” laughed Ridgewell.

The 24-year-old played Midget AAA hockey with the Saskatoon Stars, then played on a junior team at Athol Murray College of Notre Dame in Wilcox.

The goalie played NCAA hockey for Merrimack College in Massachusetts, then headed to Sweden to play professional hockey for Djurgarden in Stockholm.

Ridgewell said playing in the NWHL is the highest level she has competed at.

“We’ve only played Minnesota [Whitecaps] and the [Metropolitan] Riveters so far, but I think I’ve been able to watch every other team play and it’s good hockey out there,” Ridgewell said.

There are no fans allowed inside the arena in New York, however, lots are tuning in to watch for free on Twitch, a live streaming platform.

The players are receiving full salaries despite the shortened season in the bubble. The NWHL is also splitting the revenue 50/50 with players. Players get a portion of the revenues from merchandise sold with their names on it and their expenses – including hockey equipment – are paid for.

However, many of the top players from the United States and Canada have opted to train in cities across North America, as part of the Professional Women’s Hockey Players Association (PWHPA). The PWHPA is advocating for a single, united North American league after the Canadian Women’s Hockey League (CWHL) folded in 2019.

“It’s a very touchy and sensitive topic in women’s hockey right now but I think at the end of the day everybody is just trying to do their best to support the women’s hockey game,” Ridgewell said.

Ridgewell’s helmet, which was custom made, includes an ode to her highschool in Outlook, Lutheran Collegiate Bible Institute, with the school’s emblem on the back of her helmet. 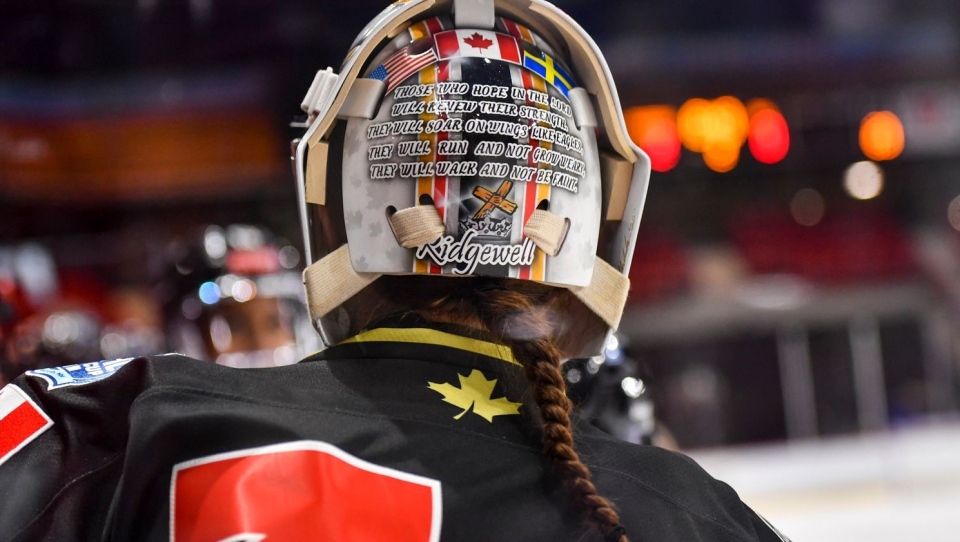 Many friends and family from Saskatchewan have been tuning into the NWHL tournament and she is hoping more are inspired to watch the games.

“I’m doing the best that I can by playing and giving young girls something to watch,” Ridgewell said. “Especially at a time like this when there’s not a lot going on, so it’s a great chance to promote the women’s game.”