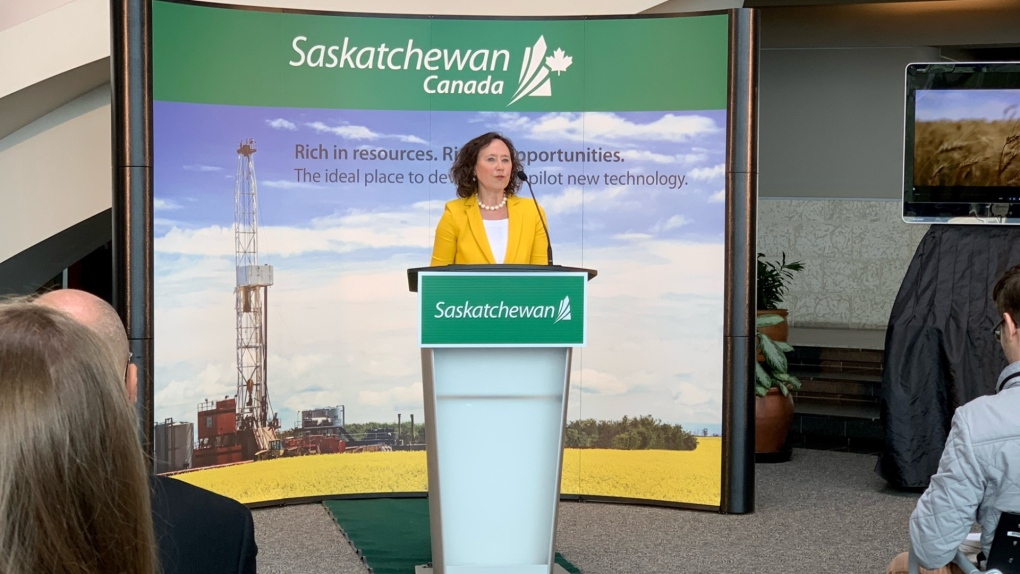 Minister of Energy and Resources Bronwyn Eyre announces the province's backing of a foundation report study to develop a hydrogen hub. (KaylynWhibbs/CTVNews)

The Saskatchewan government has begun work on a foundation report study ramping up development on a potential hydrogen hub in the Regina-Moose Jaw region.

The Ministry of Energy and Resources, Whitecap Resources and Federated Co-operatives Limited (FCL) will support the study, developed by the Transition Accelerator and the Saskatchewan Research Council (SRC).

The report will provide investors with an analysis of commercial-scale hydrogen opportunities and synergies with carbon capture utilization and storage (CCUS) infrastructure in the province.

"We're a world leader in CCUS and enhanced oil recovery, which has natural connections to blue hydrogen," Energy and Resources Minister Bronwyn Eyre said in a release.

"We expect this report to accelerate the private sector's interest in Saskatchewan's emerging hydrogen economy."

These “blue hydrogen” projects the province is eyeing are enabled using CCUS technology.

The release states that the hydrogen market is expanding globally with increasing use in power generation, transportation fuel and feedstock in the chemical industry.

Whitecap Resources and FCL signed a memorandum of understanding to explore opportunities around CCUS, enhanced oil recovery and CO2 transportation infrastructure in October, 2021.

Blue hydrogen captures, stores and reuses CO2 produced in existing industrial processes, such as refineries, and potash and fertilizer facilities.

FCL said hydrogen production is required for what they are currently doing at the core refinery, as well as in the future as they begin to produce renewable diesel at the Integrated Agricultural Complex set to be built in the city.

"The potential for a Hydrogen and CCUS Hub in Saskatchewan is exciting as it would create new opportunities for local industry right here in Saskatchewan," Federated Co-operatives Limited CEO Heather Ryan said. "We know that CCUS will play a prominent role in the future of transportation fuels. The research we are investing in will identify the role that hydrogen production will play in the transition to a low carbon economy.”

FCL added, supporting this project is a step towards their plans to decarbonize and reach their goal of being net-neutral by 2050.

According to Whitecap, these projects will be the first in Saskatchewan to utilize blue hydrogen.

In Sept. 2021, the province announced several new policy commitments to advance CCUS projects, including the opportunity for an infrastructure hub in the Regina-Moose Jaw corridor.

The province said a hydrogen/CCUS hub in the region could allow for the development of an entire, commercial-scale hydrogen supply and demand chain in Saskatchewan.

The ministry is supporting the TA in carrying out a foundation with a grant of $100,000, boosted by an additional $50,000 in funding provided by Whitecap Resources and FCL.

The report will be completed within the year.

A Russian airstrike on residential areas killed at least 21 people early Friday near the Ukrainian port of Odesa, authorities reported, a day after the withdrawal of Moscow's forces from an island in the Black Sea had seemed to ease the threat to the city.

The World Health Organization's Europe chief warned Friday that monkeypox cases in the region have tripled in the last two weeks and urged countries to do more to ensure the previously rare disease does not become entrenched on the continent.