REGINA -- Saskatchewan officials are offering their condolences to Britain's royal family following the death of Prince Philip, the Duke of Edinburgh.

Philip died at the age of 99 on Friday.

"As we mourn the passing of His Royal Highness The Duke of Edinburgh, I extend my deep sympathies to Her Majesty and The Royal Family," Saskatchewan's Lieutenant Governor Russ Mirasty said, in a statement Friday.

Mirasty noted the Duke's numerous trips to Canada, including eight visits to Saskatchewan. His most recent visit was in 2005, during the province's centennial celebrations.

"He was much loved and will be fondly remembered," Mirasty added.

Saskatchewan Premier Scott Moe offered his condolences, emphasizing the Duke's impact on the country through his sense of duty to the Canadian Armed Forces and commitment to youth through the Duke of Edinburgh's Award.

"We share in this sorrow with millions of others across the Commonwealth and the world," Moe said, in a statement. "It is our hope that the knowledge of the extraordinary impact that His Royal Highness had on so many people and organizations in his many decades of public life will provide comfort and solace."

The Saskatchewan legislature observed a moment of silence. The premier offered condolences on behalf of the people in Question Period.

“In attending to his duties, Prince Philip was rarely grave, often informal and capable of creating excitement wherever he went. Mr. Speaker, Prince Philip had character and actually he was a character,” said Moe.

The Duke visited Saskatchewan eight times and helped the province celebrate many significant anniversaries. He accompanied the Queen to Regina in 1973 to mark the centennial of the RCMP and was part of the province’s centennial celebration in 2005. He met a half dozen premiers including Roy Romanow.

“I found him to be kind of a down to earth individual as I recollect it now. He was royalty, yes but very much kind of a people person,” said Romanow.

Flags on all Government of Saskatchewan buildings will be flown at half mast until sunset on day of Philip's funeral. 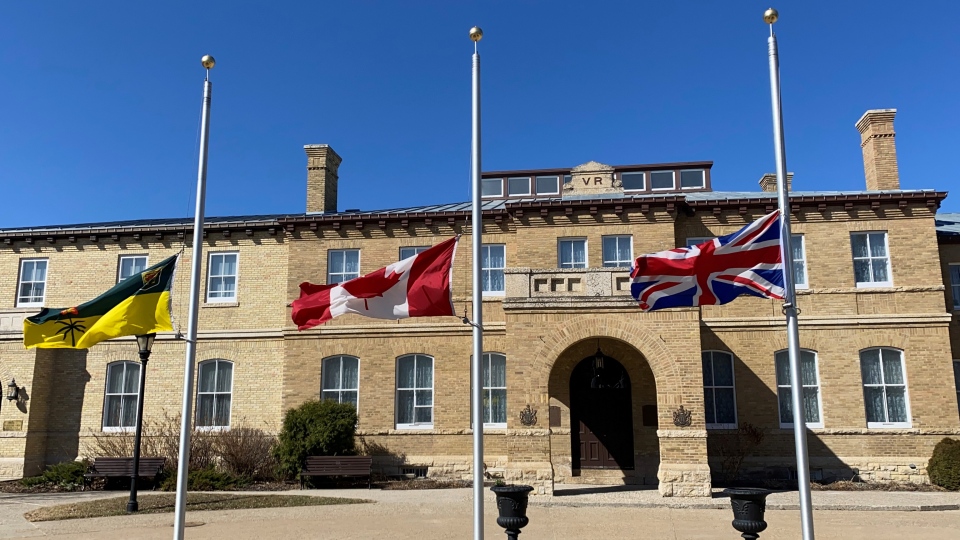 Flags were lowered to half mast at Regina's Government House on Friday, April 9, to mark the death of Prince Philip. (Gareth Dillistone/CTV News)

A virtual book of condolences is also available on the Lieutenant Governor's website.