REGINA -- The Saskatchewan real estate market saw a busy January, with sales up more than 49 per cent from the same time last year.

“We haven’t seen a January like this since 2012,” Chris Gbekorbu, an economic analyst for SRA, said.

The SRA said it believes the pandemic is playing a role in the market.

“Part of the reason why people are buying new homes right now has to do with COVID-19,” Gbekorbu said. “People are definitely looking for that dedicated home office space. A lot of people don’t have that at the moment.”

Regina realtor Craig Adam said he has seen people buying and selling for various reasons, but said the pandemic is definitely motivation for some.

“I think people are trying to figure out, over time, that they can work from home. So I think there’s just that perspective, they want something different,” he said.

Adam said right now is a good time for both buyers and sellers.

“Interest rates are historically at an all-time low right now, so it’s a great time for buyers to get into the market if they haven’t already,” Adam said. “But in saying that, the product isn’t there for them, so it’s a good time for sellers to consider putting their house on the market when there’s less competition for them.”

“We were quite pessimistic. We thought that it would be on the market for a while,” Johnston said.

He was surprised at how quickly the process went.

“We listed on a Monday. Between Monday and Tuesday we had 12 viewings on the house, and 36 hours after the house being listed, we had six offers,” Johnston said. Within days, his home sold for more than the asking price.

“It’s a big relief off our shoulders,” he said. “It’s nice to know that there’s people out there who are interested in something that you have.”

Johnston now has an offer in on a new condominium. He said the buying process was fairly quick as well.

“We were looking for something specific – a condo. So there’s quite a few available and it was easy for us to find one that we really liked,” he said.

The SRA said homes stayed on the market for an average of 57 days. 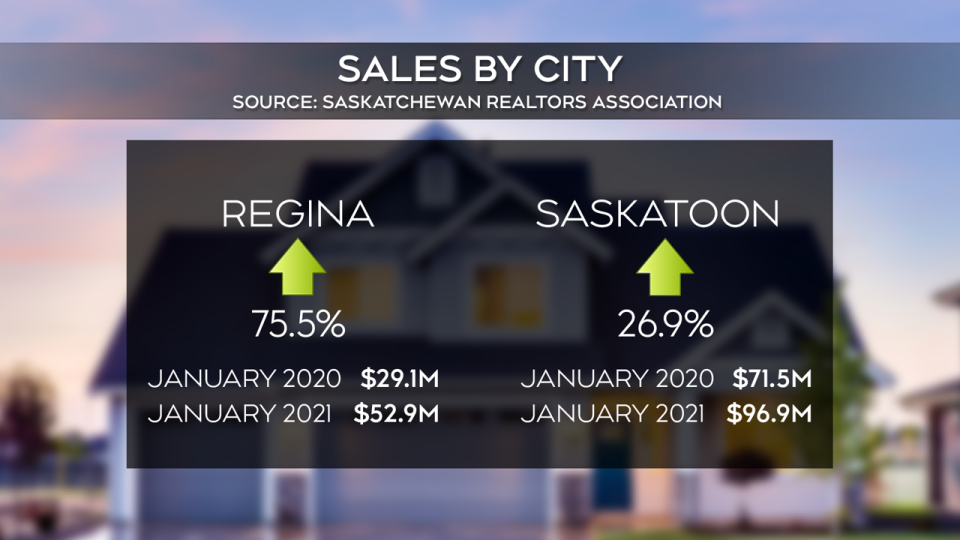 The sales volume increased brought in $96.9 million. That is 33.7 per cent above the five-year average.

In Saskatoon, homes stayed on the market for an average of 55 days in January.

The SRA said although it’s only one month of sales, it’s optimistic the strong start will mean a good year in 2021.