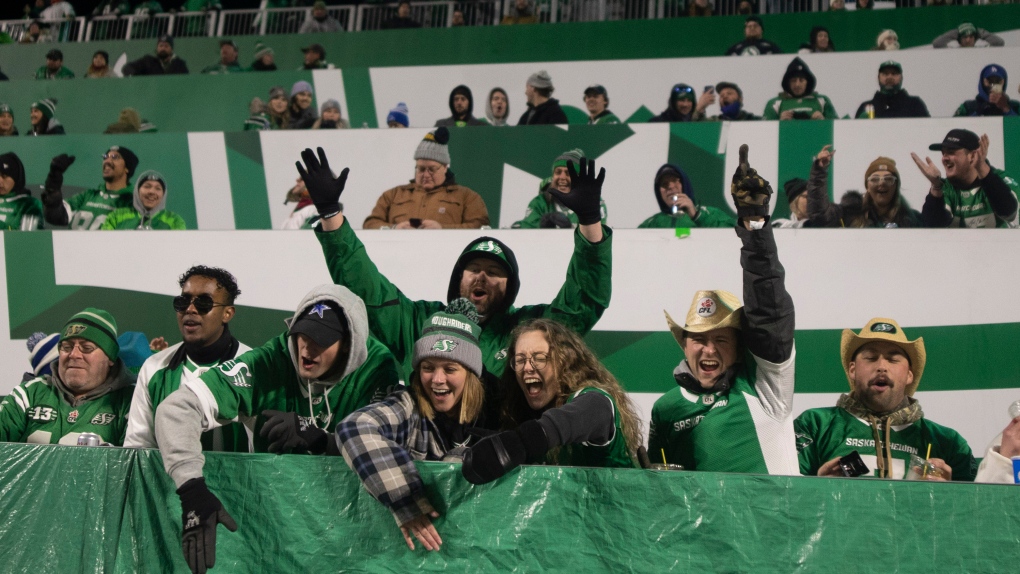 Saskatchewan Roughriders fans celebrate after a successful play in the second half of CFL football action against the Calgary Stampeders, in Regina, Sunday, Nov. 28, 2021. THE CANADIAN PRESS/Kayle Neis
REGINA -

The Saskatchewan Roughriders beat the Calgary Stampeders 33-30 in overtime on Sunday at Mosaic Stadium.

The win earned the club a trip to Winnipeg to meet the regular-season champion Blue Bombers on Dec. 5.

“I don’t even care if I kicked the game-winning field goal. I just wanted to win this game so bad for the fans. This province deserves it so much,” Brett Lauther, Riders’ kicker said after the game.

It was his field goal from 34-yards out that clinched victory for the Riders.

Lauther kicked the field goal, the crowd went wild, but a flag laid on the 20-yard line.

“I did a double-take because I knew as soon as the ball was snapped and Kaare (Vedvik) put it down we had it, it was perfect,” said Lauther. “I was trying to stop my heart rate for a second in case I had to go back out there.”

The flag was on Calgary, the penalty was declined and the game was over.

“One hundred per cent I knew he was going to make it,” Ed Gainey, defensive star, said of his team’s kicker after the game.

By his admission, it was not Cody Fajardo’s best game -- he threw four interceptions.

“If you’d have told me I’d throw four picks and we’d win, I’d say you were psychotic,” Fajardo said after a game.

Fajardo said he was ready to throw away the statistics and focus on the win. The 29-year old starter went 22 for 33 for 189 yards with a single touchdown and four interceptions. Fajardo was also the team’s leading rusher, scampering downfield for 89 yards on ten carries.

“It was kind of a result of what they were giving us.” Fajardo said. “For me as a runner, it helps me get into the rhythm of the game, you feel the chains moving, and I think it’s something I’ve relied on most of my career.”

Head coach Craig Dickenson says while he and his quarterback know that he didn’t have his best game, he found a way to win.

“[Cody] threw some picks tonight. He knows that. He made some plays with his legs and when we needed him to make some throws, he made them. The guy’s a winner,” Craig Dickenson said of his quarterback’s performance.

Calgary’s Bo Levi Mitchell threw two interceptions, both to Ed Gainey, who credited the defensive game plan for his success.

“Defence wins championships at the end of the day,” Gainey said.

He went 26 for 36 for 285 yards with two picks. Stamps running back Ka’Deem Carey turned in another strong performance against the Roughriders, gaining 117 yards on 22 tries with a pair of touchdowns.

A penalty at the end of the first half meant the Riders kicked off from mid-field. Instead of kicking deep, head coach Craig Dickenson rolled the dice on an on-side kick. Brett Lauther sent the ball sailing high and it was A.C. Leonard who came down with it.

A major penalty was assessed to Stamps defensive end Shawn Lemon after he shoved Riders receiver Duke Williams in the face.

Following the on-side kick recovery, the Riders' offence made good on the effort. Cody Fajardo faked a pass and scampered downfield for a big gain. On the very next play, Fajardo found Kian Schaffer-Baker inside the pylon for a 25-yard touchdown and a 17-8 lead.

The Stampeders mounted a late-game rally including a pair of field goals from Rene Parades, who had two misses in the contest, including one in overtime that gave the Riders a window to win.

“The winner of this game gets to go play Goliath,” Dickenson said of the Winnipeg Blue Bombers. “They’ve been the best team all year, we’re happy to be playing them, and we’re going to give them a good game.”

The West Final featuring the Riders and Bombers will take place next Sunday at 3 p.m.