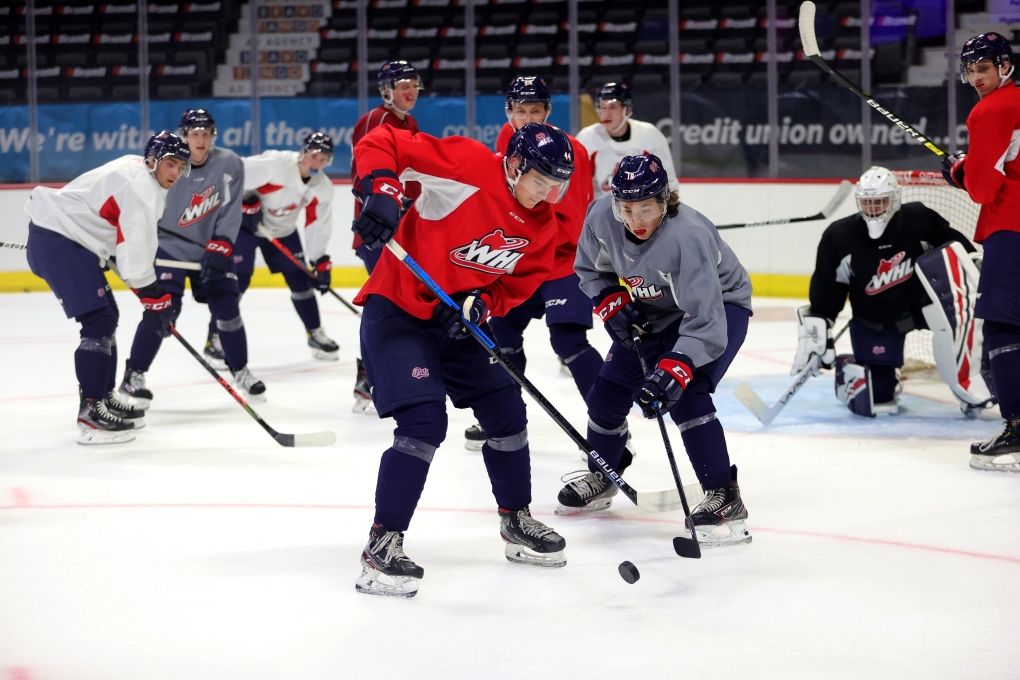 The Pats practice at the Brandt Centre ahead of their WHL season opener against the Prince Albert Raiders on Friday. (Supplied: Keith Hershmiller)

The WHL U15 draft is the time where teams, players, families and fans can look toward the future of their respective franchises. In all, 240 teenagers got the call Thursday saying they had been selected in the 2022 draft.

The Regina Pats missed the 2021-22 playoffs by just 2 points. They were slated to draft 6th overall but after a trade with the Swift Current Broncos, selected Brandon, Man. forward Cole Temple with the 5th pick.

NEWS🗞️: The Pats have traded the sixth and 54th overall selections in today's draft to the @SCBroncos in exchange the fifth overall pick and a 2024 fourth-round pick!

With the fifth pick, the Pats have drafted Cole Temple! Welcome to Regina, Cole! #MarchOn

“He’s an outstanding player,” said Pats’ head coach and G.M. John Paddock. “We jumped at the opportunity to draft Cole.”

“He’s one of those kids that in a glide, he picks up speed,” said Pats’ head scout Dale McMullin. “Seems like a great kid with obviously some athletic ability.”

With the sixth overall pick in the 2022 WHL Prospects Draft, the Broncos are proud to select defenceman Peyton Kettles from Rink Hockey Academy! pic.twitter.com/mkGEhLG71I

With the 14th overall pick in the first round, we're proud to select Defenceman Connor Schmidt from OHA U15 Prep!

“He’s a complete defenceman,” said Warriors’ G.M. Jason Ripplinger. “He’s got skill, he knows how to defend, not scared to battle. We’re excited for him in the future.”

The Saskatoon Blades rounded out Saskatchewan’s portion of the first round at 21st overall, picking Moroz’s teammate, Isaac Poll from White City, Sask.

“Reese is a modern-day defenceman,” said the Hitmen Director of Player Personnel, Garry Davidson. “He checks all our boxes and will be a great addition to our back end.”

Reschney and Hamilton were teammates with the Northern Alberta U15 Prep Extreme. Rescheny tallied 92 points in 25 games while Hamilton notched 54 points – 42 of those being assists.

In all, six Saskatchewan products were selected in the first round of the draft:

Paddock said the hard work for these players starts now to ensure they’re ready to step into lineups.

“It’s up to them to a great extent to do their part over the next five years,” he said. “It’s also up to us as an organization to do what we can to help them. They may be good players now, they are not just going to remain that way without a lot of work.”

“You’re always excited on this day,” said Ripplinger. “We were able to fill all the holes. The future looks good here.”

Included in the 240 draftees was Chloe Primerano – the first woman skater chosen in Canadian Hockey League history – selected in the 13th round, 268th overall by Vancouver.

“Chloe’s play in one of the top U15 leagues in Canada made her fully deserving of this selection today,” said Giants’ G.M. Barclay Parneta.

“We are thrilled for Chloe and her family and congratulate her on her achievements so far in her bright, young career,” said WHL Manager of Hockey Operations, Taylor Green in a statement on social media.

Ukraine's richest man filed a lawsuit against Russia at Europe’s top human rights court on Monday, seeking compensation over what he has said are billions of dollars in business losses since Russia's invasion.

The federal government has created a special task force to help tackle the major delays with immigration applications and passport processing that have left Canadians frustrated.

Abortion may be legal in Canada but accessing services very much depends on where you live, one advocate says.