She has captured photos of many different animals from eagles and bears to moose.

"A lot of times you can sit down here and you don't see anything,” Runge said.

Runge received a special treat last month when she spotted a group of river otters playing on the river bank. 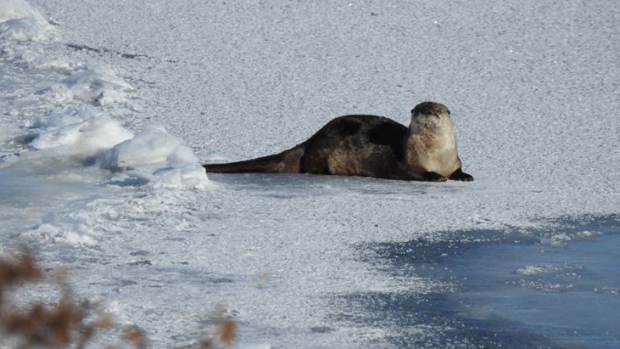 "I was just kind of focusing my camera and actually it popped right out in the picture frame of my camera, it was kind of amazing and I was so excited,” Runge said.

Runge has seen the otters again on a few other occasions, she says they're fun to just sit and observe.

"It was awesome just watching them, the way they cuddle and roll around in the snow and that and just the movement of them, they're so playful,” she said.

River otters are native to Saskatchewan and the Qu'appelle Valley.

Darrell Crabbe, Executive Director with the Saskatchewan Wildlife Federation, says otters hadn't been seen regularly for decades, but the animal's return is the sign of a strong ecosystem in the valley.

"When your predator population is increasing somewhat, trying to match the population of all the other species, whether it's rabbits or deer or whatever it might be, that's a good sign of a healthy wildlife population,” he said.

"They're very elusive, they don't like to be around people very often, so it's quite interesting for someone to get a video of them,” Crabbe said.

Runge added, "I don't know how long they've been here, I know every now and then it takes me a long time to find them, but they're here and they're cute and adorable.”