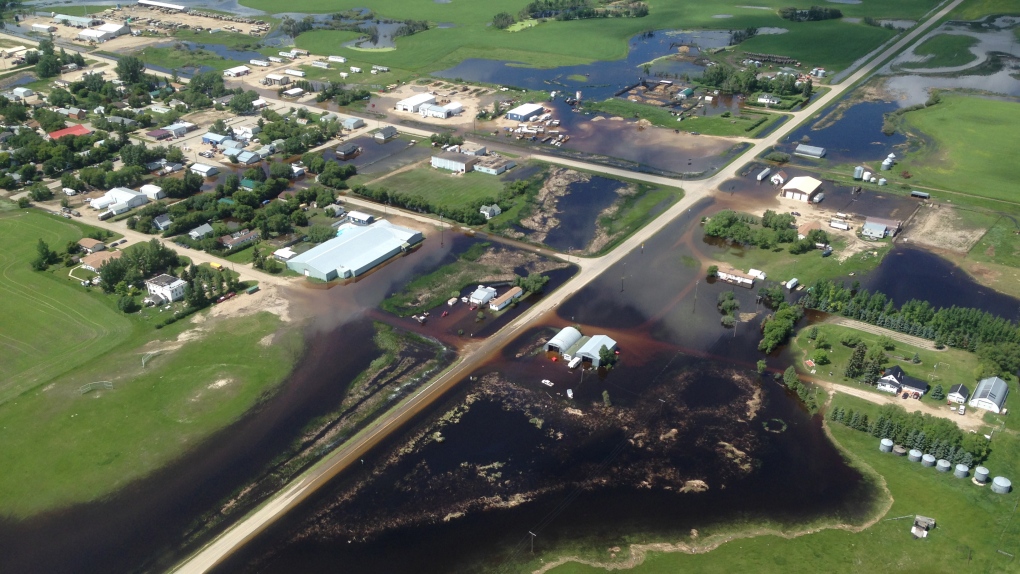 An aerial view of the flooding in Alida, in southeast Saskatchewan, is shown on Wednesday, July 2, 2014. (THE CANADIAN PRESS/Don Healy)

Seventy-three landowners in southeastern Saskatchewan have signed onto a project that will allow better control over water flows in an effort to reduce flooding downstream.

The plan allows control over when and how much water flows into Moose Mountain Creek and eventually the Souris River.

"The whole goal of these systems is to be able to control and organize the water flow with gates and gated culverts and such, which start, quite frankly, at the farm gate," said Moe, who is also minister responsible for the Water Security Agency.

The permit includes all existing drainage works and some future ones. It covers 30 gated structures, operated by landowners, which can hold back water when river levels are too high. There are also 22 hectares of wetlands for water retention.

The new approach eliminates each landowner having to get three permits for one drainage project and means landowners can co-ordinate their efforts.

Stewart said over the last 30 years, there hasn't been a good understanding of the regulations that did exist, "and they were pretty loose."

New drainage regulations introduced in September 2015 will mean more organized and controlled drainage projects such as the one announced Thursday, he added.

"In extreme wet-weather events or heavy runoff events, there will be some land that will still be flooded (but) less than there would have been without the project," said Stewart.

"The water will have to be held back at times ... so that when it's released, it won't do downstream damage."

The issue last came to a head in 2014, when Manitoba called in the army and declared a state of emergency as water pushed in from Saskatchewan.

In response, Moe said Saskatchewan farmers were not responsible for the extreme rain in 2014.

He said Thursday that farmers involved in projects such as the one just announced are part of the solution.