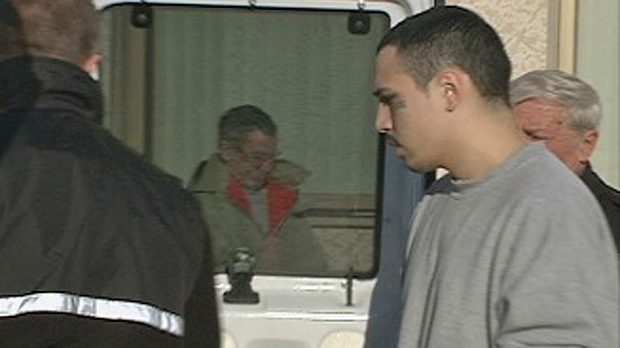 Christopher Pascal is seen outside Court of Queen's Bench in Regina on Thursday.

A 21-year-old man convicted of a violent sexual assault in Regina has been declared a long-term offender.

On Thursday, a judge sentenced Christopher Pascal to 27 months in a federal penitentiary, and imposed a seven-year long-term supervision order.

Pascal was facing a possible dangerous offender designation after he pleaded guilty to sexually assaulting a 28-year-old woman in Regina in July 2010.

Court heard Pascal, then 18, punched the woman in the head repeatedly, then grabbed her by the hair and smashed the back of her head into the metal covering of a window.

He then dragged the woman into a back alley, where he forced her to remove some of her clothes and sexually assaulted her.

Pascal’s criminal history includes several other convictions for violent offences, including an aggravated assault on his then-15-year-old girlfriend in 2008, in which he kicked and stabbed her several times.

“This was done on a victim who he knew, and in fact had briefly dated, which speaks to Mr. Pascal’s lack of empathy for someone with whom he once shared affection” Dr. Shabehram Lohrasbe, a Victoria-based forensic psychiatrist, said in a psychiatric assessment report.

In it, Dr. Lohrasbe concludes that Pascal’s history suggests that he is a high risk for future acts of violence if he doesn't successfully complete treatment programs.

“With such treatment, it is reasonable to anticipate that the risk that he poses can be reduced to the point where he can be managed in the community with available resources within the foreseeable future,” he said.

The Crown had argued that Pascal meets the criteria to be declared a dangerous offender. However, Justice Ted Zarzeczny said the Crown failed to prove a pattern of behaviour that would warrant putting the young man behind bars indefinitely.

“There is no suggestion, in his criminal history, that he has had any prior issues with sexual assault behaviours or deviancies,” Zarzeczny said in his 44-page written decision.

“To the extent that the circumstances of the underlying offence were clearly out of character for Mr. Pascal and out of context with his other offending behaviours, I find and conclude it is not part of any ‘pattern.’”

He said the court has good reason to be optimistic that Pascal can control his risk to reoffend if he successfully completes violent offender and substance abuse programs.

However, the judge warned Pascal that his conduct puts him in “serious jeopardy” of being declared a dangerous offender, should he be charged with another violent offence in the future.

“This court hopes that Mr. Pascal recognizes that he was not put on this earth to spend the rest of his life in jail,” Zarzeczny said.

“That future no one wishes for him.”