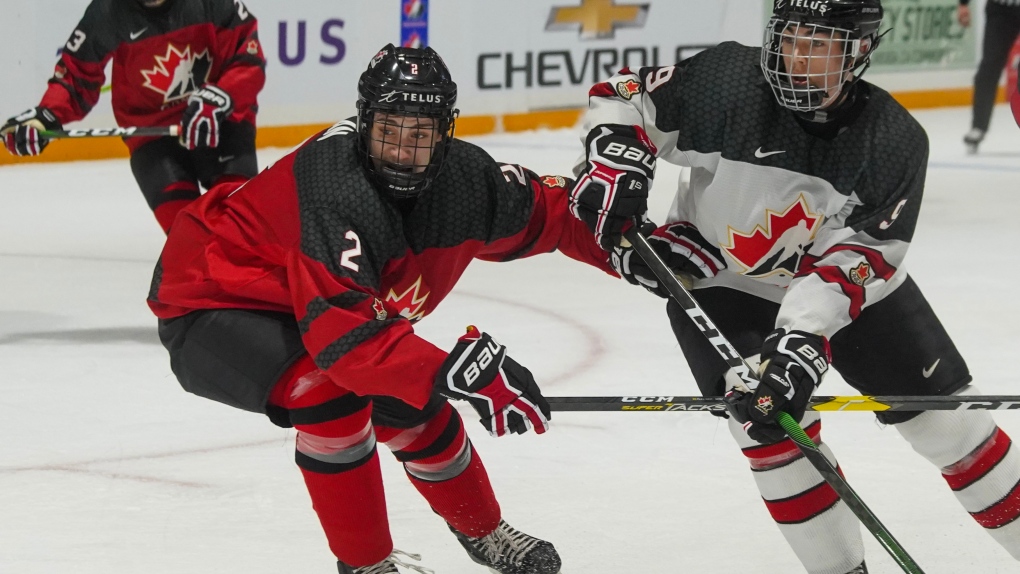 REGINA -- Having the opportunity to wear a Team Canada jersey is special for any hockey player, but doing it in front of family and friends, in your home province no doubt adds to that experience.

Regina’s Cole Sillinger and Davidson’s Nolan Allan have had that opportunity this week, as they compete with Canada White and Canada Red, respectively, at the 2019 World Under-17 Hockey Challenge in Swift Current and Medicine Hat.

“It’s been surreal, anytime you get a chance to play for your country, you want to do it, so I’ve just been taking it all in and embracing wearing the jersey,” Sillinger said after Canada White picked up a 3-2 overtime win against Canada Red in the quarterfinals on Thursday night.

Sillinger and Allan were on opposite sides during Thursday’s quarterfinal, which is a change for the two Saskatchewan products, who represented the province together at the Canada Winter Games earlier this year.

“I’m really good buddies with Nolan, I’m used to playing with him instead of against him, so that was a bit of a change, there was a bit of words for us, but it was good seeing him again,” Sillinger said.

Despite losing out on a shot at a medal, Allan said his first experience with Hockey Canada has been everything that he hoped it would be.

“It’s been great, it’s been so surreal, you dream of wearing the maple leaf on your chest and to be able to do that is pretty cool, it’s pretty special,” Allan said.

Sillinger is putting together a strong tournament so far with five goals through four games at the World Under-17s.

Canada White head coach Sylvain Favreau said the Regina product is a dangerous player at both ends of the ice. “We are talking about goals and points that he’s been putting up, but it’s really the play away from the puck that makes him the player that he is,” Favreau said.

Sillinger was named an assistant captain for Canada White. Favreau said his leadership abilities stood out right from the start of their development camp in the summer.

“He’s a natural leader and he does a really good job at it,” he said.

Sillinger is in his first season with the Medicine Hat Tigers. He’s been off to a fantastic start with eight goals and 17 points in 14 games. He’s hoping to build off this week’s experience with Hockey Canada when he heads back to the Western Hockey League.

“There’s lots of skill here, it’s the best tournament in the world right now for our age, so it’s a good test to see where I’m at and where I need to be in the future,” Sillinger said.

Allan has posted one goal and three points through 14 games with the Prince Albert Raiders.

He said getting the chance to play a big role with Canada Red this week will help him as he continues his rookie campaign.

“Everyone is making each other better here,” Allan said. “A lot of guys here don’t get a lot of ice with their junior teams, we’re all 16-year-olds, so it’s nice to get to play a bit more and everyone is really developing well here.”

Allan and Canada Red will face Sweden in a placement game on Saturday in Swift Current.

Sillinger and Canada White are into the medal round, they take on the United States in the semifinal on Friday night in Medicine Hat. The gold and bronze medal games are on Saturday.