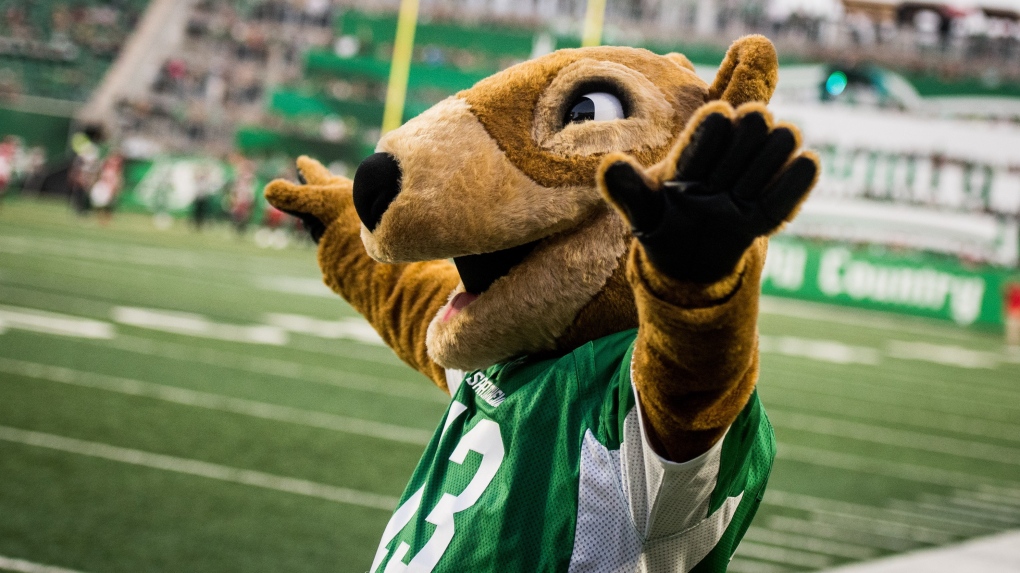 Gainer Gopher greets the crowd during first half CFL action between the Saskatchewan Roughriders and the Calgary Stampeders, in Regina on Saturday, July 6, 2019. THE CANADIAN PRESS/Matt Smith

REGINA -- Gainer the Gopher is in hot water once again.

The Saskatchewan Roughriders mascot came under fire Saturday night for his actions during the club's 38-25 home win over the B.C. Lions.

After the game, the Lions tweeted a video of Gainer walking on to the field pulling a stuffed lion by the tail. The mascot threw then kicked the lion before spreading its legs and grabbing it in an inappropriate spot before punting it.

Even without the contacts.

#mascotlivesmatter is your mascot in danger? Picked on by other mascots? Please call 1-800-FLUFF for our 24/7 mascot help hotline https://t.co/u9GiApubAw

Gainer then grabbed the lion by the tail and flung it over his shoulder as he walked off the field. That prompted some people to voice their displeasure on social media regarding the mascot's actions.

"We agree that Gainer took it too far during Saturday's game against B.C. Lions," the Riders said in a statement. "We've talked to Gainer about it and taken away his stuffed lion."

It's been a rough start to the season for Gainer. The Riders' mascot since 1977 drew much criticism for his new look at the club's home-opening 32-7 win over the Toronto Argonauts on July 1.

Many Saskatchewan fans were unhappy with the changes to the gopher's appearance, notably his slimmer body and green eyes, The hashtags BringBackGainer and NotMyGainer trended on Twitter and an online petition asking him to be changed following the Toronto win generated more than 4,375 signatures.

Prior to the Riders' 37-10 home loss to Calgary on July 6, the team unveiled a second makeover for the mascot. Before the opening kickoff, the CFL club posted a video on social media showing Gainer removing his short-lived green contact lenses and throwing them into the garbage before heading to the field with black eyes similar to his original look.

And Saskatchewan fans seemed to agree with the move as the mascot's pre-game introduction drew a loud ovation from the Mosaic Stadium faithful.