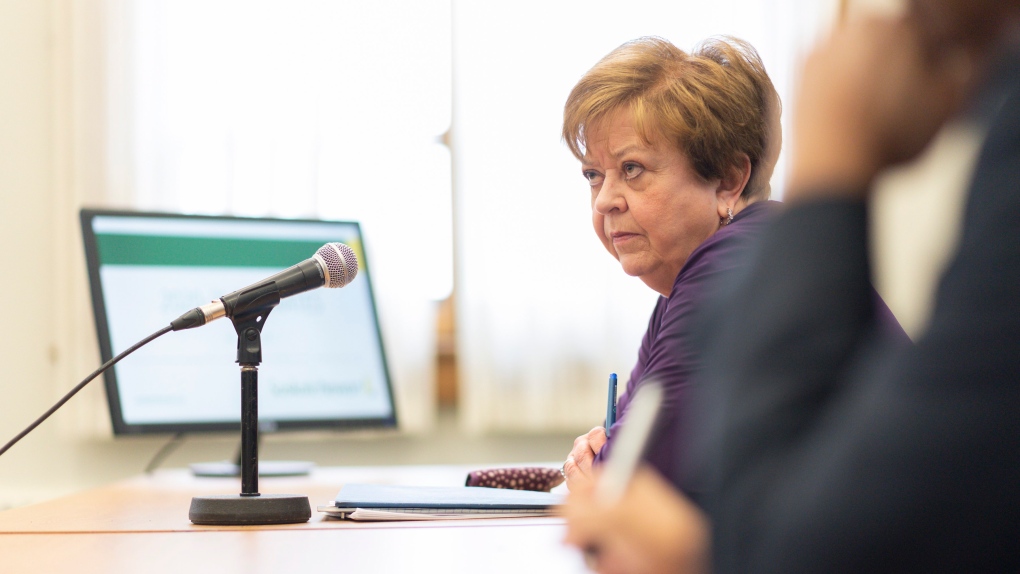 Donna Harpauer, Saskatchewan finance minister, speaks during an unusual Budget Day at the Legislative Building in Regina on Wednesday March 18, 2020. Due to the financial implications of the COVID-19 pandemic, the government announced yesterday that a full budget would be postponed to a later date. The budget announced today included spending estimates, but not revenue estimates. THE CANADIAN PRESS/Michael Bell

REGINA -- Saskatchewan's finance minister says a slower recovery from the COVID-19 pandemic means it's going to be tough to eliminate the province's deficit by 2024 and the government is likely to pick a new goal.

It's the first time the Saskatchewan Party government has signalled a possible change in its plan to rid itself of a $2-billion deficit by 2024-25 -- a promise Premier Scott Moe campaigned on during last fall's provincial election.

He repeated that again weeks ago when he announced the next provincial budget would be tabled April 6 and said his government would "work toward our commitment to balance the budget by 2024."

"It's going to be very, very difficult to meet that goal," Finance Minister Donna Harpauer told The Canadian Press on Monday.

"We still haven't taken in our final projections, so I guess there's a faint hope," she said.

"The way the projections are coming in, in all good likelihood, we'll have to change that goalpost."

Harpauer said the economic recovery from the COVID-19 health crisis is taking longer than anticipated in the province and other jurisdictions.

On last fall's campaign trail, Moe said clearing the deficit by 2024 would happen without his government increasing taxes or slashing services.

The Opposition NDP questioned that promise at the time.

"I support having a goal, but I don't support being irresponsible to meet the goal," Harpauer said.

She added more will be said about the deficit when the 2021-22 budget is presented next month at the start of an eight-week spring sitting of the legislature.

A spokesman for Moe's office, saying Harpauer's words stand for the government, declined to comment.

Also on Monday, the Ministry of Finance said the province has allocated all of a $200-million contingency fund established last year to cover costs tied to the pandemic.

Among the biggest expenditures detailed were $76 million to address pressures faced by the Saskatchewan Health Authority, $20 million on grants to small businesses hurt by public-health restrictions and $17 million to support the tourism sector.

The province spent $40 million from the fund on reopening of schools last September.

This report by The Canadian Press was first published March 1, 2021