School board trustees vote down motion about Pride celebrations 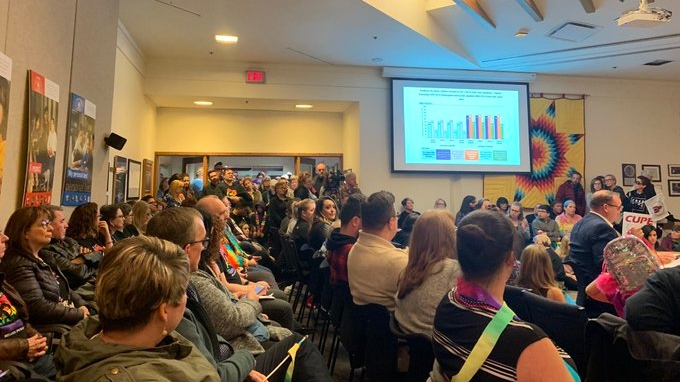 The Regina Public Schools board of trustees voted against a motion to "reaffirm the status quo" around pride in schools.

Board meeting for @RegPublicSchool overflowing into hallway. Lots of people out to hear the result of a motion from a Trustee supporting and recognizing Pride celebrations. CUPE members also inside calling for wage increases for education support workers #yqr pic.twitter.com/C2HPhOQtrX

In a 4-3 vote, trustees decided schools will reserve the right to display Pride events as they desire, but are not obligated to partake.

It was decided the matter would be put forward to Administration to be looked at by a committee who will determine proper guidelines.

Board of Education Trustee Aleana Young put forward a motion recognizing and supporting Pride celebrations. The motion followed a discussions held in June, when a group of parents shared concerns about “the implementation of Pride Day and the increased promotion of LGBTQ ideal within the public schools.”

Young mentioning how LGBTQ staff and students have to deal with the question every day. Adding it’s comparable to how @RegPublicSchool started flying the Treaty 4 flag. #yqr