REGINA -- Dionne Warner, well-known in Saskatchewan for her courage and perseverance through her public battle with cancer for more than 25 years, has died after the disease returned just after Christmas.

Her husband, Graham, said in an email to CTV News that she died by choice using the province’s Medical Assistance in Dying (MAID) program. She was 55.

She was first diagnosed with breast cancer at age 30, and since then she fought through liver cancer multiple times, brain cancer twice, bone cancer, lung cancer and more. She beat the disease nine times.

Warner received multiple awards and accolades throughout her public battle with cancer. In 2010 she received a Woman of Distinction award for her volunteer work at the Allan Blair Cancer Clinic, she was named one of 32 international Heroes of Hope by the American Cancer Society in 2011, she was CTV Regina’s Citizen of the Year winner in 2015 and was named one of 25 heritage heroes by the Look Good Feel Better cancer program in 2017.

A book about her journey titled “Never Leave Your Wingman” was written about Warner and her husband, Graham. It became a Canadian best-seller.

She was a keynote speaker at multiple events throughout the years. She also created a calendar to raise money for the Canadian Cancer Society that raised more than $40,000.

Close friend Kelly Greenwood said as much as Warner helped others, she saw it as a two-way street that also helped her. 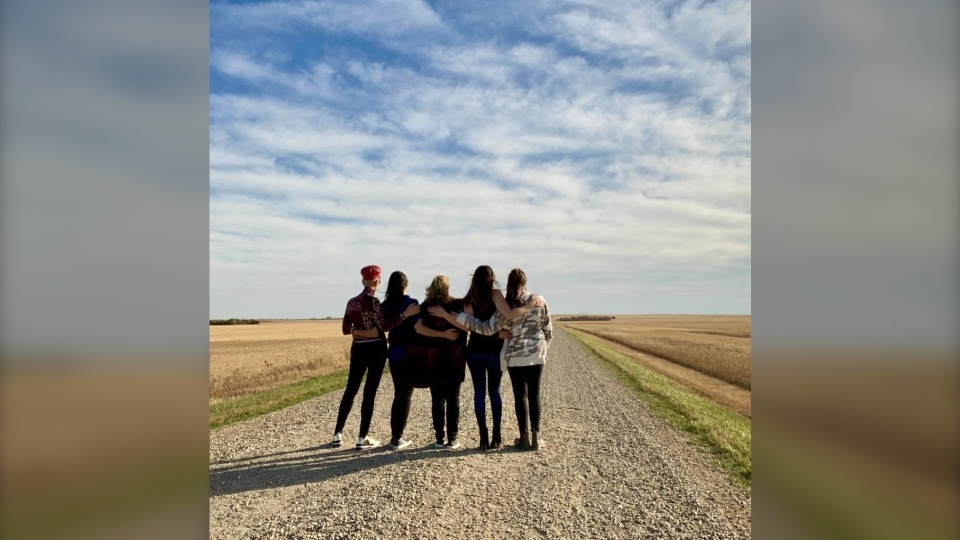 According to friends, this was one of Warner’s favourite photos, of a day she planned with her best friends. (Submitted: Crystal Kalyniuk)

“I think at the end of the day if she thought that she could help just one person, then she was doing a good job,” Greenwood said.

A eulogy written by Dionne and Graham said those who have met, been inspired by, loved or have been loved by Dionne, will always have a gift from her.

“Live life to the fullest with no regrets, stay positive, never give up hope and love with all your heart,” the eulogy reads.

Those closest to her said she was one-of-a-kind.

Crystal Kalyniuk, a close friend of more than 20 years, said Warner was the best person to have as a friend.

“She has a way of including everyone, making even a stranger feel the most welcome and she’s just this magnet of joy and love, with the perfect amount of spunkiness,” Kalyniuk said. “She just radiates light and love.”

Kalyniuk said it was important for Warner to share her story publicly so others could see that it’s possible to live a full life with cancer.

“You can thrive through cancer. It doesn’t have to be the end. You can live a wonderful life with, and through [cancer],” Kalyniuk said. “She lived a life fuller than most of us if we lived to 110.”

Warner also made an effort to help others who were battling cancer, including now-close friends Bernie Felix and Kelly Greenwood.

Felix was diagnosed with Hodgkin’s Lymphoma in 2005. He met Warner when she was volunteering at the Allan Blair Cancer Clinic.

He said her positive energy and bubbly personality inspired him through his battle.

“Dionne, at that time, I believe she had fought it maybe three or four times already and she seemed to be fine, so I kind of had this hope that ‘maybe we can survive this,” Felix said. “It never ruled her life. She lived life to the fullest in spite of having cancer.”

On her final day, Warner was joined by her husband, Kalyniuk and Greenwood.

Greenwood called the day beautiful and said there were tears, laughter and peace.

“She went out on her own terms and she was completely in control of a situation that was no longer controllable,” Greenwood said.

Kalyniuk said what she’ll remember most about Warner is her laugh and the joy she brought to everyone who met her.

“Dionne has always referred to her family and friends as her angel network. But little did she know, she was the angel to us. She will be remembered with this abundance of joy and this zest for life,” Kalyniuk said. “Her love will continue to be felt everywhere.

Greenwood said Warner’s final message to her friends, family and the public would be to live life with no regrets.

“Life is a gift and you’re only given one of them,” Greenwood said, quoting Warner. “Surround yourself with nothing but positive people and positive vibes, and you’re going to be okay.”

According to Warner’s eulogy, a memorial service will be held in the future.