Sixties Scoop survivor returns to the life he was taken from in Sask.

REGINA -- The first memory Wayne William Snellgrove has as a child is being scared, not knowing what was going to happen next, living under the care of the province of Ontario.

“I was in a big room with a lot of kids. I remember thinking this is not normal, this is not natural. It was terror, absolute terror. That was my first impressions of life,” said the 48 year-old.

Snellgrove was one of more than 20,000 Indigenous children, who were taken from their families and adopted out to white families between the 1950s and 1980s under a government run policy. In Saskatchewan, it was called the Adopt Indian Metis (AIM) Program. While most children were adopted in Canada, other children were sent to the United States and Western Europe. Today, it is known as the Sixties Scoop.

“I was taken day one as a newborn baby, right from Wadena Hospital. I grew up not knowing about my First Nation or culture or anything. My mother was healthy. It was just part of the 60s Scoop. Part of genocide,” said Snellgrove, who was taken in 1971.

At two and half years-old, Snellgrove was adopted by a family in Pennsylvania. He would grow up in multiple north-eastern states including New Jersey, Ohio and Massachusetts.

“This was back in the 70s and interracial adoptions weren’t commonplace. I was living in middle white America. ‘Indians’ back then were perceived as dirty and less than and that’s kind of what I got from society. I was born with a cleft palate, I had a stutter, learning issues and I failed the first grade. I had all the symptoms of a terrified little boy,” said Snellgrove.

He would later find his escape in sports and discovered swimming would be his outlet to try and make sense of life in the mid-90s.

“I didn’t play nice with others. I was an angry kid so I started swimming. I was nationally ranked and I ended up winning two United States swimming national championships. five km and 10km in open water,” said Snellgrove. 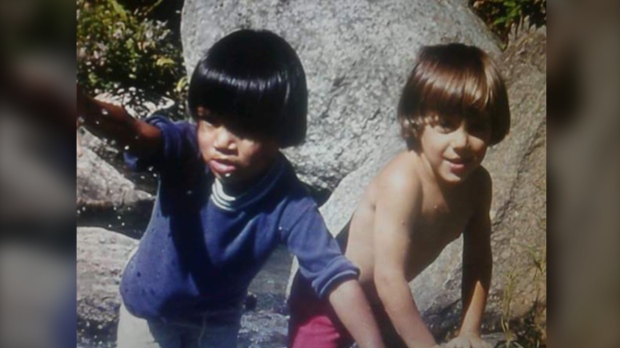 “There was nothing that my family did was wrong. They wanted to love a little boy but the problem is that that little boy didn’t love himself. I didn’t know who I was or where I belonged. I would look out the window and hope that one day, I would be rescued so I could go back to my culture, to be with a family that looked like me, to have a sense of belonging. This is nothing against my adoptive family. ” said Snellgrove.

When his adopted mother passed away in 1997, Snellgrove realized he was not only grieving for her but he was also grieving for his biological mother during his entire childhood. With the help of a family reunion website, an investigator later found his real family in 2003.

“It was just like an ocean of tears. All I wanted to be was loved and remembered and that’s all this little boy wanted to hear, was to be remembered. That’s really where my healing journey began. A couple months later, I hopped on a plane and met my mom for the first time at the Regina airport and told her ‘I love her,’ at 32 years-old,” said Snellgrove.

Snellgrove’s older sister Myria Smoke said she can remember growing up with the hurt and pain her family went through when Snellgrove was taken.

“I knew there was trouble in the house. A lot of yelling and crying, ‘Go get him back’ and nobody could do nothing. My grandma put it in my head to try and find him. We all tried. When we reunited with my brother, it was the best feeling ever. My mom, all the brothers and sisters were there. It was just the most amazing, amazing thing to ever happen to have that closure and to have him in my arms again and just to catch up on our lives. My mother was beaming,” said Smoke.

Snellgrove would find out his biological family is the Smoke family from Fishing Lake First Nation, located just east of the Quill Lakes in Saskatchewan. His father is also a Kayseas.

Snellgrove now stays in Regina with his sister and visits his mom regularly. He has found healing and he helps others across the globe through his traditional ceremonies. He’s an author of a new book about meditation and he wants to give back to the youth, hoping to be able to coach in the upcoming North American Indigenous Games. His message to other 60s Scoop survivors is to forgive.

“I still go back to the place where it all began at Wadena Hospital and pray and let go of the pain there. We need to identify those wounds and do what we have to do to heal. It wasn’t my fault because I was taken. We need to forgive those who took us. You can’t heal with hate in your heart. You need to learn to forgive.”