ESTEVAN -- There’s still no set date for the start of the SJHL season, but the Estevan Bruins have already starting keeping score – with the Estevan Gymnastics Club.

In a unique fundraising effort, the gymnastics club challenged the hockey team to a strength competition that took place on Thursday.

“How can we do this so the girls want to participate in our fundraiser?” said Club President Rebecca Fedyk. “So we said why don’t we bet money on the Bruins to see who is stronger.”

In March, the club was forced to close temporarily due to the COVID-19 pandemic. The timing put financial pressure on the club, as it had just purchased a new facility.

“We just lost a lot of revenue this year so we really needed to fundraise because we just bought this building last year, so we have some high costs associated with it,” explained Fedyk.

Those factors led to the high-stakes competition comprised of six strength tests, each featuring five Bruins and gymnasts facing off.

The public placed bets on who they thought would win the contests, which ranged from a rope climb to a chin up hold with part of the proceeds going to the club.

The exercises were routine for the gymnasts, but they still felt their pride was on the line.

“It’s exciting but you don’t want to be the only one who didn’t beat a Bruin so you’re kind of nervous at the same time,” said Bergen Kersey, age 10. “I beat the Bruins on all of them except the leg lifts.”

The Bruins put up a fight, winning the rope climb, but the gymnasts dominated the other five categories.

“I had to do a chin up for as long as I could...and I didn’t do that good,” laughed Bruins winger Troy Hamilton. 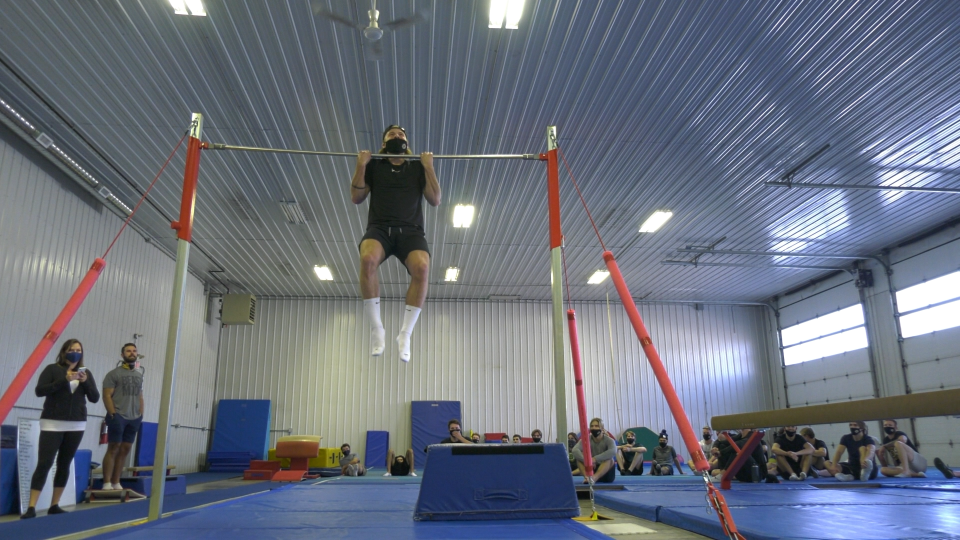 “It’s harder than it looks and I think they deserve a lot of credit,” added defenseman Devon Harrison, who completed 43 pushups.

Kersey explained many of the activities are about mental toughness, and the support and cheering from her competitive teammates boosted her self-esteem.

“You don’t have to be big and strong, you have to be confident in yourself,” Kersey said.

In total, the club raised over $5,000 from the fundraiser.