‘Someone gave me a different life’: Sask. woman with Lyme disease pushing for change

The last 2 1/2 years have been hard on Sheri Vincent. She used to be active, homeschooling her five children and looking after her property.

But now, she’s forced to move slowly around her home in Glen Ewen. She uses a cane, and there’s a wheelchair in the corner for when her pain gets so unbearable she can’t walk. There are medications neatly organized on her coffee table. She takes dozens of pills every day. She’s settled into an armchair for her second IV treatment of the week.

Vincent has neuro Lyme disease. This is her life now.

Vincent’s symptoms began three years ago. She was suffering from fevers and thought she just had the flu. Then one morning, she fell on the floor because one side of her body was numb and she was too dizzy to stand.

“I feel like I woke up one morning, and someone gave me a different life,” she said.

As time wore on, Vincent continued to get worse. She was sent for MRIs and tests, and her doctors believed she had multiple sclerosis. But the stem cell treatments she was given did nothing to alleviate her symptoms. Instead, her pain intensified and she just kept getting worse.

“I describe it as similar to being in labour,” she said. “I can’t talk through it; I can’t do a thing through it.”

When the MS treatment didn’t work, Vincent says she was desperate for help. So, she turned to a naturopath in Weyburn to try to find out what was wrong.

Krystal Kothlow knows the struggle of getting a Lyme disease diagnosis. Her symptoms began in 2009, and she wasn’t diagnosed until 2015.

Kothlow followed in a friend’s footsteps, travelling to British Columbia to see a naturopath who was able to diagnose her with Lyme disease. But before that diagnosis, she says she was passed from specialist to specialist for years without finding a solution.

Both Kothlow and Vincent were diagnosed using a Lyme disease test that is not available in Canada. Instead, their blood tests were sent to the United States.

“In Saskatchewan, we don’t have a lot of doctors that are very educated on the subject (of Lyme disease),” Kothlow said. “So, they just have a really hard time diagnosing anybody that presents with symptoms.”

By the time Vincent was diagnosed with Lyme disease through a naturopath in Weyburn, her condition had deteriorated.

“It was already in my brain stem and spinal cord,” she said. “I was just in such bad condition.”

Vincent researched treatments and was unable to find anything in North America. So, she was forced to go overseas.

In December 2016, Vincent and her husband travelled to the St. Georg Klinik in Germany to begin treatment. The clinic specializes in Lyme disease and cancer treatments.

Vincent’s blood cells were misshapen from the Lyme disease in her body. She says the doctors told her that her heart was struggling and she would likely have died from heart failure within a year.

“The treatment that I had was able to improve that situation, so I wouldn’t be quite so close to death,” Vincent said.

The clinic uses hyperthermia treatments, heating up the body to 42.5 C. The Lyme bugs in the bloodstream die over 41 C and the treatment kills as many as possible before lowering body temperatures back to the normal level of 37 C.

As the Lyme bugs die, toxins are released into the blood stream. So, treatment includes blood cleansing to remove those toxins.

“It is awful, it’s terrible,” Vincent said. “I don’t really want to do it again, but I don’t have a choice.”

Vincent says 80 per cent of the people who go through the treatment only have to do it once. Unfortunately, she wasn’t that lucky. She will be heading back to Germany at the end of July to undergo a second treatment that she hopes will offer long-term relief of her symptoms.

Vincent has five children, four of whom are adopted. They range in age from seven to 17, and she says her struggle with Lyme disease has been very hard on them.

“My seven-year-old doesn’t remember when I wasn’t sick,” Vincent said. “That is so sad to me because I was so active in their lives.”

It’s her children, she says, who have helped push her to keep going back for treatment.

“They’re scared they’re going to lose their mom,” Vincent said. “I can’t, in good conscience, tell them that won’t happen for sure.”

The Ministry of Health says the risk of contracting Lyme disease is low, but not at zero. Since 2008, the province says there have been three cases of Lyme disease. Two people were infected outside of the province. As for the third person, it’s not clear where they contracted the disease. These cases were confirmed using a Canadian test, not the American one used by Vincent. She says she is not included in that number.

Ticks in Saskatchewan are mostly wood ticks, which don’t carry Lyme disease. It is carried on black-legged ticks, which are smaller and live longer than wood ticks. The ministry says it has tested more than 21,000 ticks since 2008. Fifty ticks were identified as black-legged ticks, and four were infected with the organism that causes Lyme disease.

The disease is now present in Manitoba, and that’s concerning for Saskatchewan.

Saskatchewan uses a two-step process to test a patient’s blood. The first step is an enzyme-linked immunosorbent assay, which is performed at the Saskatchewan Disease Control Laboratory. A confirmatory test, using a Western blot test, is sent to the Public Health Agency of Canada’s National Microbiology Laboratory in Winnipeg.

The cost of Lyme disease has put a large financial strain on Vincent’s family. She says she’s already spent $85,000, and that total will rise to $125,000 after her second trip to Germany scheduled for the end of July. Once she’s back, Vincent’s medications will cost her $4,000 a month.

“It’s not money we just had sitting there,” she said.

Vincent takes at least 70 pills each day. That number can increase depending on the severity of her symptoms. She says she uses a spreadsheet to keep track of her medications.

Vincent’s cousin, Sherri Tessier, has started a GoFundMe page to help raise money for Vincent and her family.

“There’s no choice,” Tessier said. “If (Vincent) wants to live, she has to go and have this treatment, and hopefully that will be the cure.”

Vincent says the financial support has been invaluable for her family. But, the support is also helping to spread a message about Lyme disease in Canada.

“People are hopefully protecting themselves from Lyme disease because of it, and hopefully they’re going to be part of this movement to change things,” Vincent said.

‘We’re trying to move mountains, and we’re hoping that everybody will help push’

Vincent and Kothlow agree that Saskatchewan, and Canada, needs to develop a better understanding of Lyme disease. They hope by sharing their stories, they can help push for change.

“If you have long, lingering symptoms, or if you’ve been told by doctors that the symptoms aren’t really fitting in to any other puzzle, you may have Lyme disease,” Kothlow said.

The number of reported cases of Lyme disease in Canada has increased drastically over the last few years. In 2009, there were 144 reported cases across the country. That number skyrocketed to 987 cases in 2016. Vincent credits the increase to people gaining a better understanding of the symptoms and asking to be testing for Lyme disease.

“I think it is a movement and I hope that it’s a successful one,” she said. “If not in time for me, then hopefully in time for others.”

Vincent has a lot of support behind her, including Tessier. Tessier says she feels a lot of anger about what her cousin has gone through and is looking for support to make things better for people with the disease.

“We’re trying to move mountains,” she said. “We’re hoping that everybody will help push.”

There’s also a call for better education for doctors, with a goal of diagnosing Lyme disease much faster.

“It’s starting to become more prevalent in Canada, but Saskatchewan has a long way to go,” Kothlow said. “It is something that is in Saskatchewan, and that’s really what I want people to know.”

While the disease is gaining attention, Vincent worries it won’t come soon enough for her.

“I believe that it will take my death for something to be done,” she said. “A day in the life of someone with Lyme disease, especially third-stage, is a nightmare.” 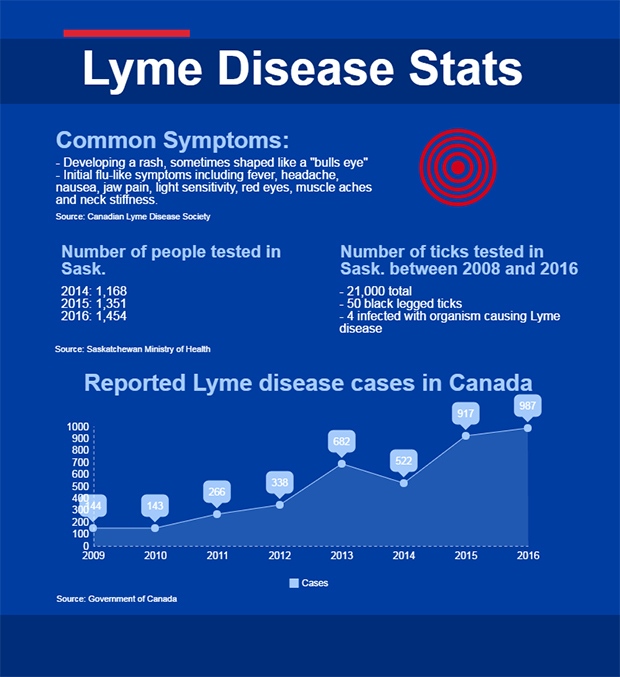