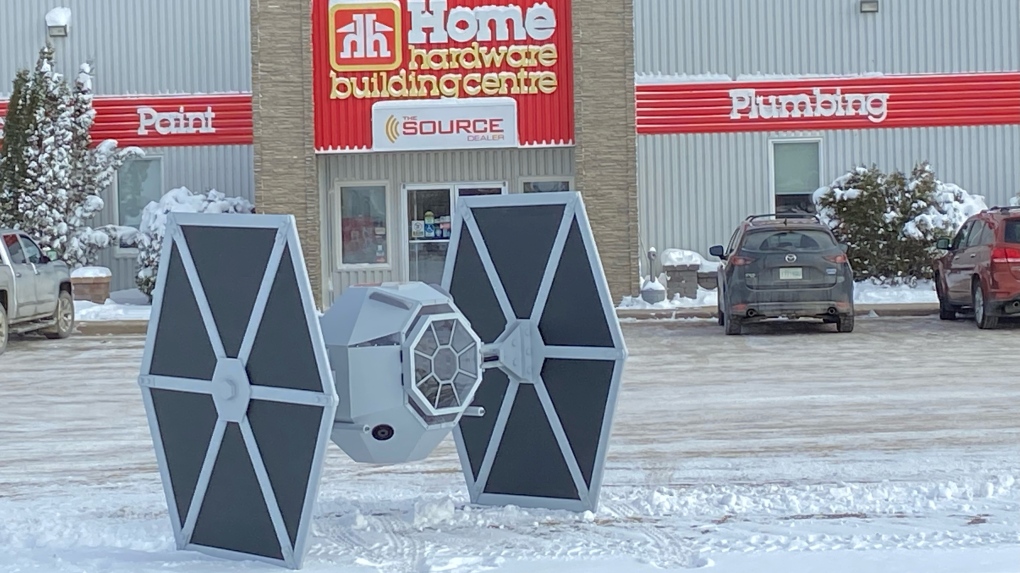 The life-sized replica of the Imperial star fighter took around a month to build. It was unveiled on Halloween and served as a fundraising attraction. (Submitted: Derek Bushman)

A central Saskatchewan town was turning heads thanks to a life-sized display from the popular Star Wars film series.

Visitors to Watrous, Sask. over the Christmas holidays were witness to a replica TIE Fighter, a spacecraft used by the fictional Galactic Empire.

The craft was displayed in full view of visitors, complete with some festive Christmas decorations outside of the Watrous Home Hardware Building Centre, just off of Manitou Avenue. 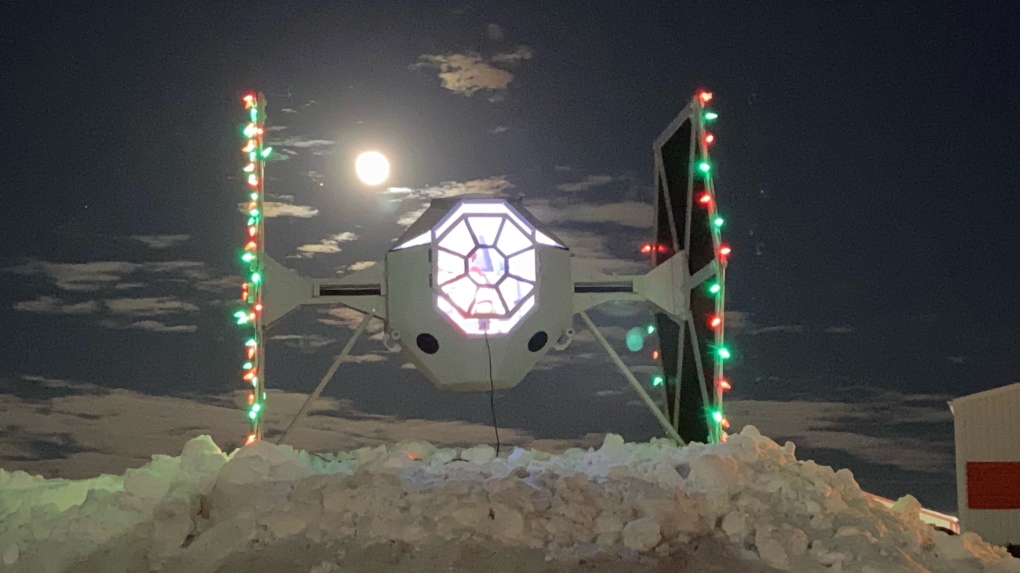 The replica was decorated with Christmas lights and other effects for its return to display in December. (Submitted: Derek Bushman)

However, this was not the first time the attraction was on display, according to one of its architects, Derek Bushman.

“Every year for Halloween we do a theme and early last year, in the summertime, we decided to do Star Wars,” Bushman explained.

Derek, and his father Ken, built the Star Wars icon in support of an annual fundraiser for the Watrous Food Bank called “Halloween for Hunger.”

The TIE Fighter marks just the latest project the duo has put together for the event.

The Star Wars staple took around a month to complete with Ken Bushman starting the construction in early September.

“We were trying to figure out like a fixture or like a prop, for the Star Wars theme. I came up with the TIE Fighter, figuring it might be one of the easier ones,” Derek said.

The fighter turned out to be anything but easy, with the circular cockpit giving the craftsmen some issues.

“It was definitely when he was building the middle ball, where the pilot sits. Getting all the angles down was definitely a bit more difficult than the wings, he explained.

“But we used like some pictures, from the internet obviously, to scale it on a computer to get the angles right and then just go from there in the workshop.” 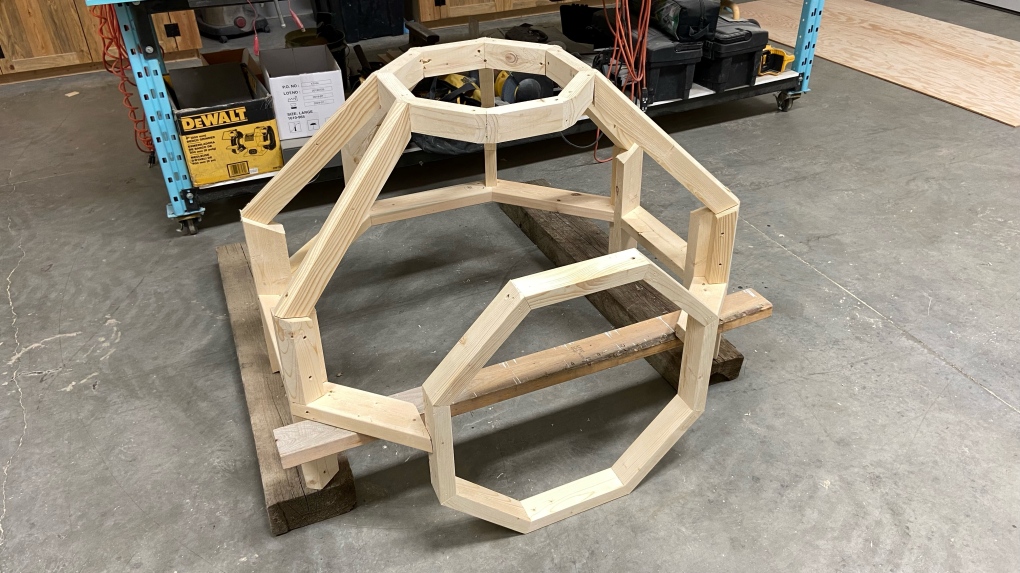 According to Derek Bushman, the cockpit was the most difficult part of construction on the project. (Submitted: Derek Bushman)

To top it all off, the Bushmans were able to get some characters to go along with their prop.

Two members of the popular Star Wars cosplay group “The 501st Legion” showed up for the unveiling on Halloween in an effort to help out with donations to the food bank. 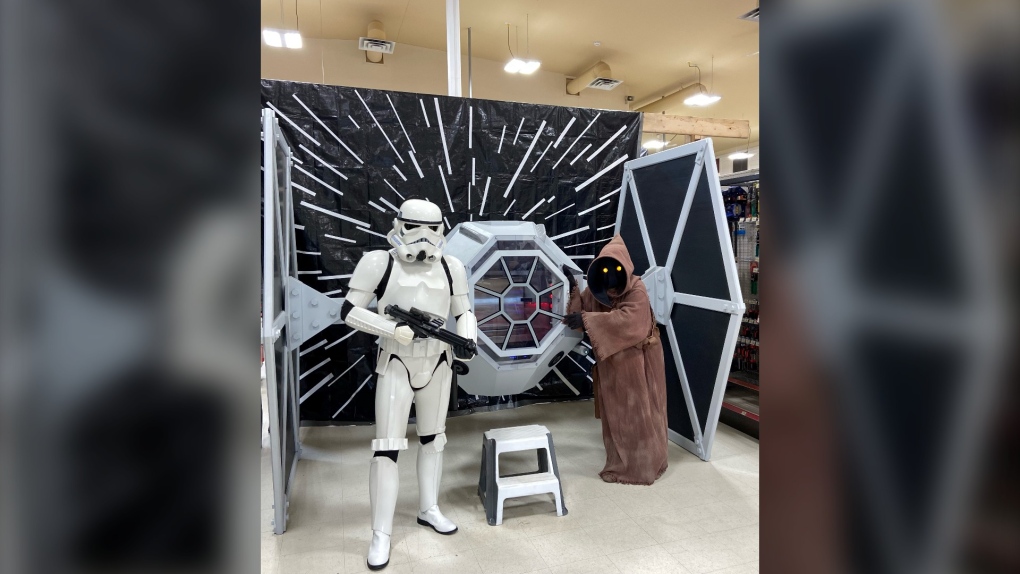 A storm trooper and Jawa pose with the TIE Fighter. Members of the popular Star Wars cosplay group, the 501st Legion, attended the showcase on Halloween to help with fundraising efforts. (Submitted: Derek Bushman)

“People who came over had a chance to get a picture with them [the Legion]. We had a backdrop for them of the Death Star,” Derek explained.

To help with the immersion, Derek installed some instruments in the cockpit, so the trick or treaters were able to experience a little bit of Star Wars action during their visit.

“We closed the door on the kids, they’d hit the button, and then we’d give them a little bit of a shake throughout, it's like a 30 to 40 second clip of some flying and some lasers going off,” he explained.

“They just thought it was the best thing ever.” 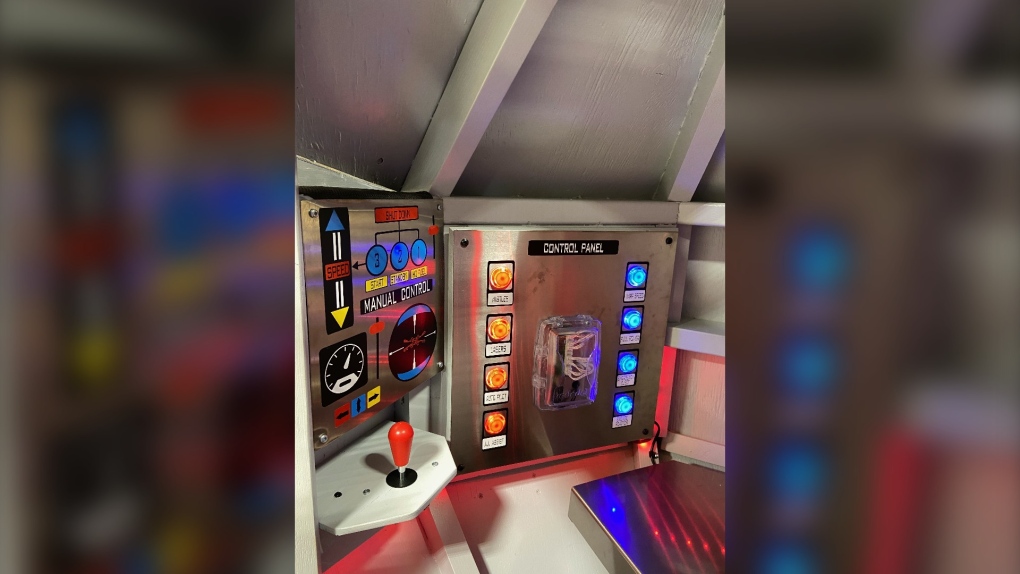 The interior featured buttons, light up panels, and much else that you would expect from an Imperial spacecraft. (Submitted: Derek Bushman)

In the end, the fundraising event collected over $3,000 for the Watrous Food Bank, in addition to the donations from the community garden.

“It spread pretty quick. People loved it. We got some really good comments,” Derek said, regarding the community’s reaction to the project.

“They said we set the bar pretty high for next year.”

For now, the TIE Fighter is in storage, with the likelihood of joining the Bushman’s other creations in Ken’s backyard.

“The pirate ship is in the back, it’s like a play structure now. We did like a farm theme. So he built a barn and that's in the back. He's got a couple of ducks back there, that’s another story. So it's like a little farm back there for himself,” Derek said.

“The props just end up back there as play structures for his grandkids. My kids.”

As for how Derek and his father will top last year’s creation, there’s some inspiration coming from a certain duo of Italian plumbers.

“We’re thinking Super Mario, because that movie’s coming out and it might be cool,” he said.

“Some sort of level that kids can run through, hit the question marks, go through a couple pipes. That’s my idea.”