Statue of nuns in Wascana Park painted for second time

REGINA -- A statue of two nuns in Wascana Park was painted red on Tuesday evening, the second time the statue has been marked in recent months.

The hands and feet of the two nuns were painted red and red X's on both statues.

The Provincial Capital Commission, which oversees Wascana Park, said the matter was reported to the Regina Police Service. RPS said Wednesday it's investigating the incident.

The statue was first painted shortly after the discovery of 751 unmarked graves at the site of the former Marieval Residential School on Cowessess First Nation.

The second time comes days after a search was conducted for unmarked graves at the site of the former Delmas/Thunderchild Indian Residential School near North Battleford.

Jason Bird, a lecturer with the First Nations University of Canada, says these types of incidents could be motivated by the grieving process Indigenous people have been going through with these discoveries.

"When you're going through a grieving process, anger is one of the issues that comes up," said Bird. "People are going to be angry about this history, the residential school history."

Known as the “Sisters Legacy Statue" and officially titled "Called to Serve" by its plaque, the installation was unveiled in 2015. The two nuns represent a teacher and a nurse, according to the Wascana Centre website.

"This monument recognizes the significant contributions of more than 5,500 Catholic Sisters to education, health care and social services in Saskatchewan since 1860," the statue's plaque reads, in part. 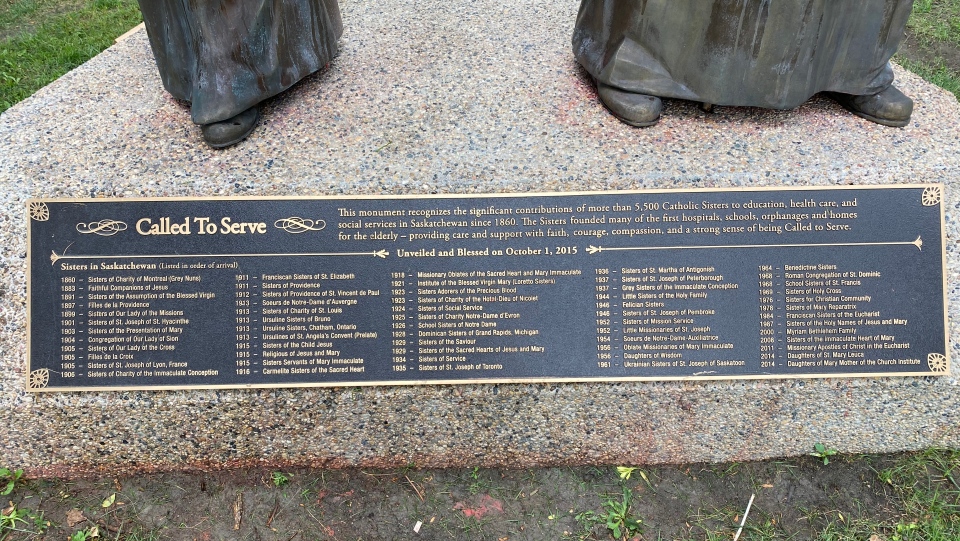 The time frame includes when many Catholic nuns were involved with the residential school system.

"People are angry now and they see those statues, and they're just like, how can anybody have this up," Bird said. "That's what goes through them because their parents were in residential school, their grandparents suffered this history. These are fresh wounds, this isn't something that's just lost on these people."

Bird said he has no problem recognizing the work done by nuns in the province, but added the recognition needs to go both ways.

"You guys want to have statues for that, that's okay," Bird said. "But let's recognize the residential school survivors, the people that came out of these schools that were intentionally hurt and taken out of their own homes and put in these mysterious places and treated in harsh ways, let's look at that history and somehow learn to commemorate that too."

The paint was cleaned from the statues by Wednesday morning.