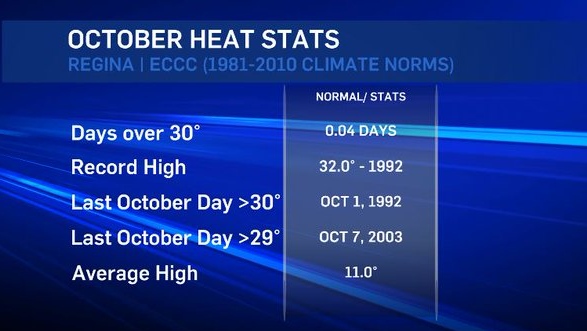 Just a friendly reminder for those of us blinded by the beautiful weather, it is October. Yep, you can see it on the calendar, you can tell from the changing leaves and know by longer nights. Though, the temperatures out there would have you believe that it is still the middle of July. But I’m sorry to say, it is fall, not summer.

After a well-above seasonal, dry and sunny September, October is starting off on the same note – unseasonably warm and sunny. Fall has given us some beautiful weather to start the season. Almost too beautiful, in fact.

This week there is a bit of a battle going on in Western Canada with snow and cold coming to parts of B.C., Alberta and through Yukon and the N.W.T. under a trough of plunging arctic air. But on our side of things, a ridge, in the upper atmosphere, keeps things stay warm and dry in southern Saskatchewan. So warm, in fact, that we may have some temperatures soar to close to 30 degrees, which is unusual for this time of year.

To give you some context, Regina typically sees 0.04 days over 30 degrees Celsius in October. This equates to approximately one day every 30 years. The last time temperatures soared to over 30 degrees in October was on Oct. 1, 1992 when the record high for October was set. The mercury reached a whopping 32.0 degrees that day in the 90s, which made it the warmest October day in Regina since 1884 when records began. Now, if we set the bar a little lower at 29 degrees, the last time Regina reached that temperature was on Oct. 7, 2003, which was almost two decades ago.

We look to be around 28-29 degrees as the maximum in Regina this week. So, we may not see the 30s, but this event is still fairly rare and a change from normal. The average high for the month is around 11 degrees – or put simply, fall weather.

This is a short-lived upper atmosphere pattern and by the time we head into Thursday and towards the weekend daytime highs will head into the teens for the first time this month. Some scattered showers and unsettled conditions accompany the pattern shift, so you’ll be in for sweater weather and fall conditions for your Thanksgiving long weekend.