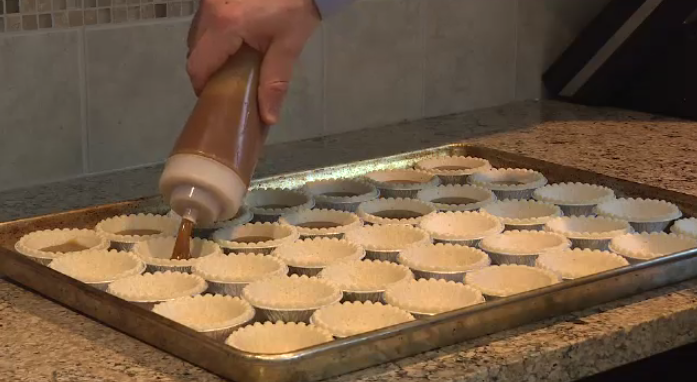 Twelve-thousand butter tarts. That's the goal the Weger family has set for themselves this year.

While it may sound like a lot, it's something they've grown used to doing every holiday season.

It's part of the “Big Butter Tart Bake for Cystic Fibrosis.”

And all that baking is for their daughter.

"Eleven years ago our daughter, Teresa, was two-and-a-half years old, and she was diagnosed with cystic fibrosis," he said. "The day that happened, my wife and I made it our goal to do everything we could to find a curse and control for cystic fibrosis."

Five years ago, they started baking and selling butter tarts, with all proceeds going to Cystic Fibrosis Canada.

The butter tarts are sold for in cases of 25, for one dollar per tart.

Thanks to donations from friends, family and local businesses, the Wegers are able to donate all the money they make from the tarts.

Cara Weger, Teresa's mother, said there's a lot for their money to go towards.

"We wanted to make sure we've improving the life expectency, and improving the medications available for those living with cystic fibrosis," she said.

Meanwhile, Teresa said she's grateful that her parents do so much to help in spreading awareness about the disease.

"We're not contagious, and we're just like anyone else. There's just extra things we have to do to keep ourselves healthy," said Teresa.

Tarts can be ordered through the Big Butter Tart Bake for Cystic Fibrosis Facebook page.

The baking is done in Weyburn, but the tarts are often transported to other cities, including Estevan, Regina and Saskatoon.

While the Wegers' goal is 12,000 tarts, if the demand is there, they're willing to bake even more.