Community members on Star Blanket First Nation thought they had received an uplifting sign of support at the end of May when the “Welcome to Lebret” sign was painted orange.

The community has been working on identifying any ground anomalies at the Qu’Appelle Residential School in the neighbouring village of Lebret.

Qu’Appelle was the last residential school in operation, closing its doors in 1996.

Chief Michael Starr, of Star Blanket First Nation, said he and the members of his community do not know who painted the sign orange; but they were surprised when four unidentified individuals made the hike up the Lebret hill Sunday, paint in hand, restoring it back to its original white.

“Some of our membership felt it was a nice sign. It was a good sign that it was part of reconciliation, part of turning all that negative stuff into hopefully a little bit more positive. They felt really good about it,” said Starr, before he commented on when the sign was returned back to white.

“When it did happen, some of our members felt a little bit downgraded, it was an inspiring way of reaching out to all of us in terms of how we need to work together, we need to partner with each other and help one another in each of our community.” 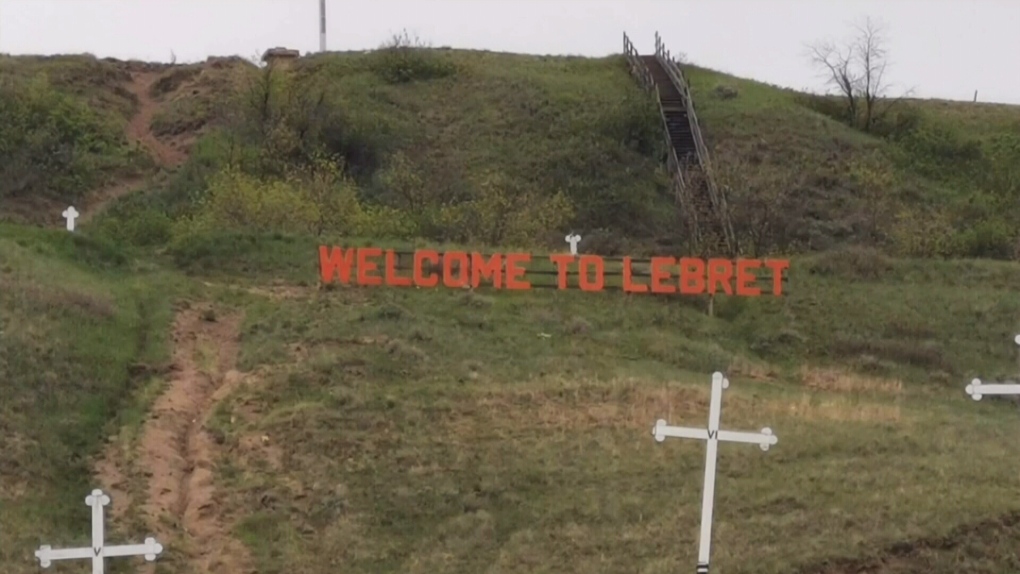 The titular Lebret sign, which sits on church property, was painted orange without permission. (Courtesy: Anonymous)

Starr said there was no communication from any side in painting the sign orange or white.

Sharon Strongarm is a community knowledge keeper, and she said it hurt driving past the sign when it was returned to white.

“It kind of bothered me when I first seen what they were doing, but it wasn't completely painted over yet when I was looking at it,” she said. “I was thinking to myself as I was driving by … You can do whatever you want. You can paint it over, but the hurt is still going to be with us.” 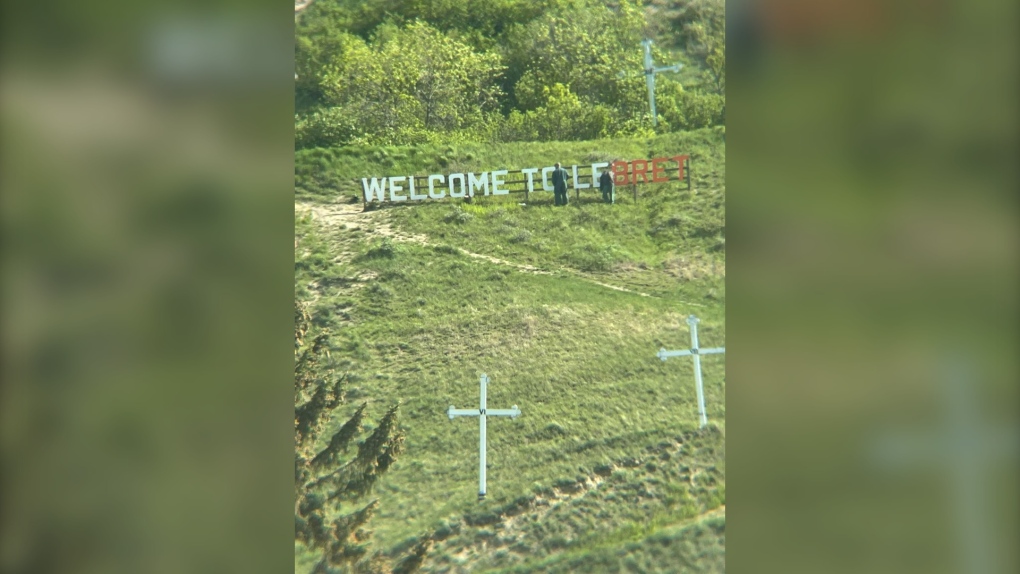 Lebret's sign in the midst of being reverted back to its original colour. The painters pictured here (and the original painter(s)) have not been identified. (Courtesy: Anonymous)

Bobbie Joe Starr works as security for Star Blanket First Nation. She was employed to protect the residential school lands as the community continues to search for the anomalies that may be unmarked graves. They patrol 24-7, and said she was one of the people who went to confront the four men who repainted the sign.

“It's strange, because we thought that they had painted it, literally overnight. (We) literally just thought it was a good gesture from town,” she said.

When CTV News approached the “Welcome to Lebret” sign Monday, remnants of both the orange spraypaint used in late May and the repainted white colour were noticeable, including an unused paint brush tucked behind the “W” on the sign.

It is not yet known who repainted the sign, but the Village of Lebret said it wasn’t them, either time.

When CTV News asked who had painted the sign, the Village said to contact the Church, who owns the property.

When asked how the relationship is between the local Church and Star Blanket, Strongarm had some thoughts.

“I believe we can reach a relationship in a good way. But not by covering things up. It's kind of a really disheartening situation that we are in and we're in the process now, of doing the ground search,” she said.

“We're trying to move ahead in the reconciliation part, but how can it be done with things that are going to be done around the community? We know we got to live in harmony with each other.”

When asked how this impacts the community’s healing journey, the knowledge keeper said it’s hard, especially when having to live so close to the old residential school.

As a survivor of the school, Strongarm said they didn’t ask for any of the traumas, or any of the intergenerational trauma that has occurred.

“Never, we were able to talk about that therapy or school or ceremonies, carry out in our traditional cultures. In our traditional ways, our mother tongue which is Cree that was all taken away.”

Chief Starr said the communication between his Cree Nation and the local church hasn’t been great. They are looking to sustain the conversation, and find ways the two parties can move together in a positive way.

Air Canada and Toronto's Pearson airport again claimed the top spots for flight delays on Tuesday, marking at least four days in a row where the country's biggest airline has placed No. 1 of any large carrier worldwide.

Planning a road trip? Here's how to save money on gas this summer

As gas prices slightly trend down this week after some of the highest national averages seen in recent months, some Canadians may be thinking twice before planning their usual summer road trip plans. CTVNews.ca looks at how drivers can save at the pumps while travelling.

Foreign ministers from the Group of 20 leading rich and developing nations are gathering in Indonesia's resort island of Bali for talks bound to be dominated by the conflict in Ukraine despite an agenda focused on global cooperation and food and energy security.

OPINION | How much of a mortgage can I afford in Canada?

Prices have been easing slightly recently, but affording a mortgage is still a very difficult task for many Canadians. How much of a mortgage can you afford? Contributor Christopher Liew breaks it down in an exclusive column for CTVNews.ca.