'There is change happening': Cross-Canada events call for end to human trafficking 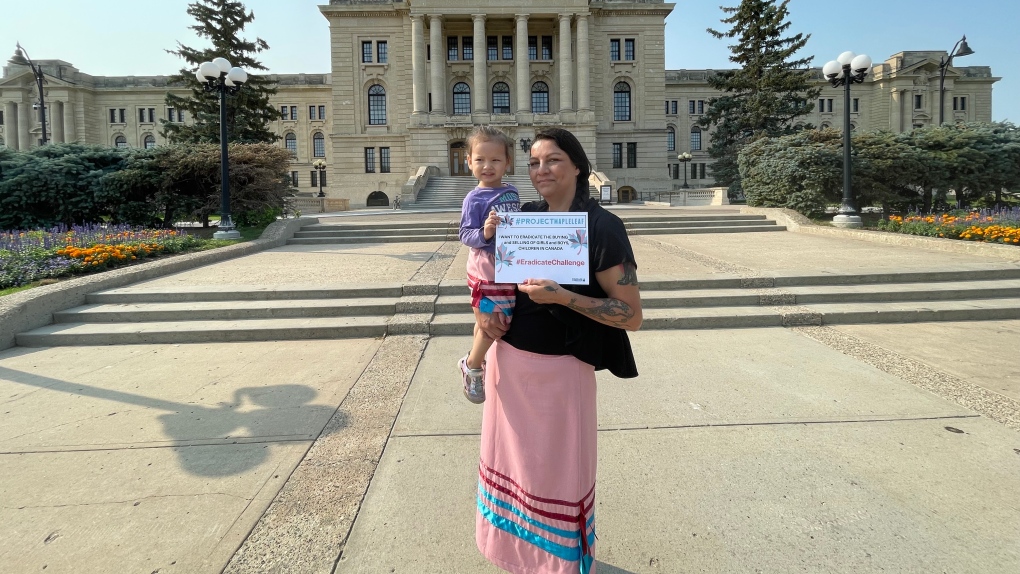 Beatrice Wallace, a human trafficking survivor and ambassador for Project Maple Leaf, stands on the steps of the Saskatchewan Legislative Building with her granddaughter. (Marc Smith/CTV News)
REGINA -

A small gathering was held on the steps of the Legislative Building in Regina on Friday morning to raise awareness of human trafficking.

At the same time, similar events were happening at seat of government in each province and territory to mark United Nations World Day to End Trafficking in Persons, which started in 2014.

"This is a part of Project Maple Leaf, which was started by a 16-year-old survivor, Kelly Tallon Franklin and she wanted Canadians to be aware that its children that are being sexually exploited and this is a way that we stand with her," Beatrice Wallace, the Regina ambassador for Project Maple Leaf, said.

Wallace is also a survivor of human trafficking, which happened when she was 14 years old in Regina.

"It was about eight years ago when I came out with it because it was such a hidden shame," she said. "Now I want to advocate for our younger generation that we are here for you and I’m going to personally do everything in my power to prevent children from being sexually exploited."

While the issue of human trafficking remains in Saskatchewan and across Canada, Wallace said supports in place for victims has improved.

"People are talking about, before people weren’t talking about it, survivors are coming forward and saying, 'this happened to me and it’s not acceptable'," she said.

"There is change happening."

According to the Government of Canada, 97 per cent of human trafficking victims are women and girls, and 45 per cent are between the ages of 18 and 24.

More COVID-19 booster shots may be on the way -- but when it's your turn, you'll get an extra dose of the original vaccine, not one updated to better match the extra-contagious delta variant. And that has some experts wondering if the booster campaign is a bit of a missed opportunity to target delta and its likely descendants.

Tk'emlúps te Secwepemc Chief Rosanne Casimir told Prime Minister Justin Trudeau that his visit to the First Nation community Monday is 'bittersweet' following his notable absence from their ceremony to recognize the first National Day for Truth and Reconciliation.

EXCLUSIVE | Germany and Denmark repatriate women and children from Syria. Will Canada Follow?

An Access to Information request by CTV News shows that when Canada learned that Canadian women and children were being held in a Kurdish-run detention camp in Syria, the response was hesitant and minimal—and it appears little has changed, writes London Bureau Chief Paul Workman in an exclusive piece for CTVNews.ca.

Alberta's two major cities were voting for new mayors during municipal elections Monday after being led by Naheed Nenshi in Calgary and Don Iveson in Edmonton for multiple terms.

Colin Powell, the trailblazing soldier and diplomat whose sterling reputation of service to Republican and Democratic presidents was stained by his faulty claims to justify the 2003 U.S. war in Iraq, died Monday of COVID-19 complications. He was 84.

77 per cent of Canadians aged 55-69 worried about retirement finances: survey

More than three quarters of Canadians nearing or in early retirement are worried about their finances, at a time when more and more Canadians plan to age at home for as long as possible, a new survey has revealed.