'They're putting their heart and soul into everything': Community supporting Regina health care workers after negative messages, protests

REGINA -- Community members are finding a variety of ways to show support to health care workers at the Regina General Hospital where anti-pandemic protests and negative chalk messages were displayed earlier this week.

Benjamin and Thea Carlson live one block away from the hospital. They said what they’ve seen in their neighbourhood this week has been upsetting.

“People were walking back and forth with signs, writing on the pavement with chalk, kind of disrupting traffic,” Benjamin said. “They had music blaring just incredibly loudly. I’m in classes trying to concentrate on Zoom and it’s really frustrating.”

He said the anti-pandemic messages people were sending were the most upsetting.

“On the pavement when they wrote ‘SHA serial killers’ that really upset me because that’s totally uncalled for,” Benjamin said.

Benjamin’s wife, Thea, is a health care worker who is on maternity leave this year. She said she was concerned about how the people going in and out of the hospital who were forced to read the messages would feel.

“My first thought was family members that may have just lost someone or are going to visit someone for the last time,” she said. “Just how heartbreaking must that feel for them.”

The couple was concerned about the hospital staff too.

“I’ve heard reactions from staff saying they’re going home and crying afterwards because they’re putting their heart and soul into everything and they see that,” Benjamin said. “I just can’t imagine how that must feel.”

To help switch the mood in the neighbourhood, the Carlsons decided to make their own messages in chalk leading up to the hospital for visitors and staff to see.

The messages say words of encouragement and thanks and include “SHA heroes” and “keep fighting.” 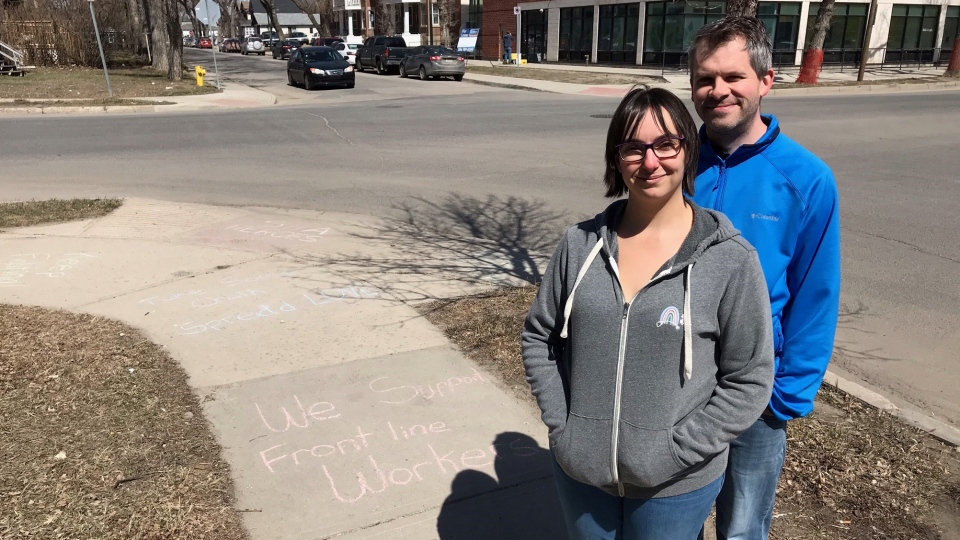 “To know that what they’re doing is making a difference and people recognize it and that there’s more positive out there than there is the negative and hate,” Thea said.

Robyn Carissa had a similar message that she wanted to send to Regina’s health care workers.

Carissa said she has many friends and family members who work in local hospitals. After hearing their stories and seeing the negativity that was spread this week, she is organizing a COVID-safe rally outside the Regina General Hospital for this coming Monday.

“We all had this outpouring of support in the beginning of COVID-19. Now we’re in the trenches and they’re feeling lost,” she said. “Even with that little bit of negativity, it’s crushing for them.”

Carissa said the rally is not about politics, but simply showing appreciation to those on the front line.

“I’ve already had some doctors and nurse phone me crying, saying they can’t believe they’re being thought about again,” Carissa said. “They are so tired. I don’t think people realize that.”

Carissa is encouraging people to show up for the support rally around 6:30 p.m. which is when the night staff will be entering the hospital. The rally will continue until around 7:45 p.m., when the day staff leave.

“They need something so that they’re not feeling like they’re going to war and they don’t have their buddies in the back supporting them,” Carissa said.

The Regina Police Service said there is an ongoing investigation regarding the protests earlier this week.

“We don’t always issue tickets at the time/scene of the incident,” RPS spokesperson Leslie Parker said in an email to CTV News Regina. “Generally speaking, not all protests are in violation of the law – whether that be of public health orders, bylaws, provincial or federal legislation. We need to gather all available information and determine if there are charges warranted.”

In a statement from the Saskatchewan Health Authority, it said it greatly appreciates the support from community members and leaders being shown to patient families, physicians and staff.

“We know the toll that this disease is taking on our patients and their families weighs on our staff every day, and knowing we have your support helps us in our determination to stay strong and continue the fight,” the statement said