REGINA -- A Regina family affected by cystic fibrosis (CF) is trying to raise awareness of the disease in hopes of making changes at the national level.

Emmanuella McDougall, 10, was born with CF, a fatal genetic disease that affects the lungs and digestive system.

“You can’t look at me and just say ‘oh, she has cystic fibrosis,’ because no one knows just by looking at someone with CF,” Emmanuella said.

That’s one of the reasons why she and her parents are trying to teach more people about the disease.

“Then they can understand what our life is like, and what we do every day,” Emmanuella said.

“She’s been hospitalized seven times. The last time was just back this February. She was in the hospital for 18 days,” Twyla said. 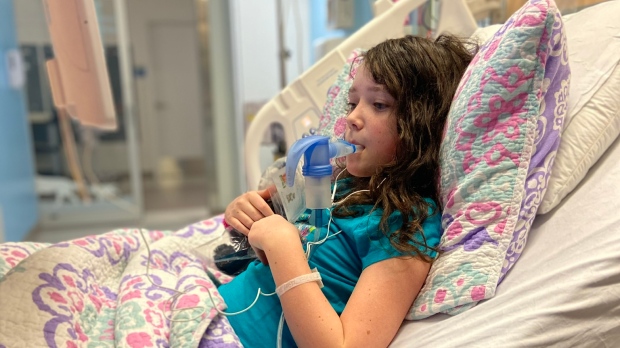 Emmanuella spends two to three hours per day doing treatments at home for her CF. She’s learned to wash her hands frequently, to wear a mask and carry hand sanitizer, and to keep her distance from others with CF and people who are showing signs of illness.

“I think everyone is getting a little bit of a taste of what CF is like here in the COVID-19 crisis,” Twyla said.

The McDougall family is also hoping more awareness will lead to more access to medication for the disease.

“We need a drug called Trikafta,” Emmanuella said. “It’s giving a bunch of people [with CF] almost normal lives, but we can’t get it in Canada.”

Trikafta was approved by the FDA in the United States in October 2019, but is still not permitted in Canada.

The McDougalls, along with Cystic Fibrosis Canada, are actively advocating to get more CF medication like Trikafta approved.

“We’re reaching out to the decision makers in our nation and our province,” Twyla said. “We’re trying to get some incredible medications that are available to CF patients, available to patients here.”

The event is typically done in a group setting, but because of COVID-19 restrictions, this year’s walk was held virtually.

The McDougalls still took part – just like they do every year.

They say their plan is to keep advocating as long as needed by reaching out to all levels of government, the media and the public. They’re hoping that someday Emmanuella will have access to medication that will allow her to live a healthier life.