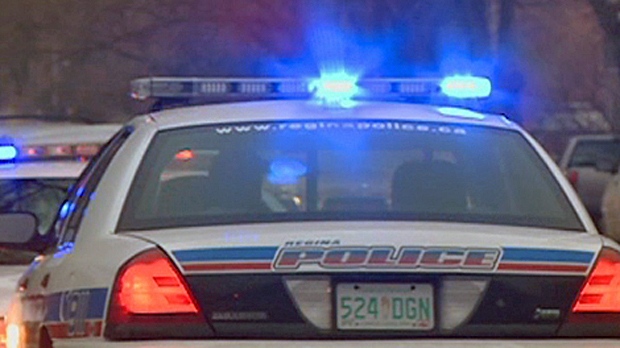 Three adults and a youth are facing a combined 222 charges, including attempted murder, following a shooting and string of armed robberies in Regina.

Shortly before 11 p.m. Monday, police were called to the 900 block of Montague Street after a teenaged boy was shot by someone in a stolen black Dodge Charger.

The 16-year-old suffered a gunshot wound to his hip and was taken to hospital.

About an hour later, officers responded to a report of a robbery at the Jolly Roger offsale in the 4100 block of Fifth Avenue.

Within minutes, police were called to a robbery at a convenience store in the 2300 block of Quance Street.

Two people carrying firearms pointed one of the guns at a 20-year-old man who was just outside the store and attempted to rob him.

The two armed suspects entered the store and demanded cash from two male employees, and struck one of them, a 29-year-old man, in the face with a gun. A 52 year-old male customer in the store was shoved and robbed of his wallet.

The suspects left the area in a car that matched the description of the one used earlier in the shooting. Police say two people were waiting inside the getaway car.

A short time later, officers responded to a third robbery, this time at the Travelodge Hotel offsale on South Albert Street.

Two males entered the store with a rifle and a knife and demanded cash from a 23 year-old male employee. The suspects took a quantity of cash, some liquor and a cellphone before fleeing in a black car.

Other patrol units were called to the south end and one of them spotted the suspect vehicle near the intersection of Broad Street and Wascana Drive.

Officers initially followed the vehicle eastbound and eventually activated their emergency lights to try to stop the vehicle.

The car accelerated and evaded police, eventually stopping on a median on Woodland Grove Drive in the city’s east end.

One of the people in the vehicle fled on foot and three were arrested in or near the vehicle. The suspect who ran away was eventually tracked down by the police canine unit and taken into custody.

Police seized numerous items from the car, including a including a rifle, two homemade “zip” guns, ammunition, spent bullet casings, alcohol and cash.

Julius Charles Bird, 18, Justin Lorne Peigan, 22 and Krystal Margaret Fesser, 23, all from Regina, and the 17-year-old male youth, who cannot be named, each face dozens of charges.

They include attempted murder, four counts of robbery, six counts of assault with a weapon, possession of stolen property and 82 firearm-related offences.

Fesser is also charged with evading police and Peigan faces 16 charges of breaching firearm conditions and four counts of breach of probation.

All four are scheduled to appear in court Wednesday morning.