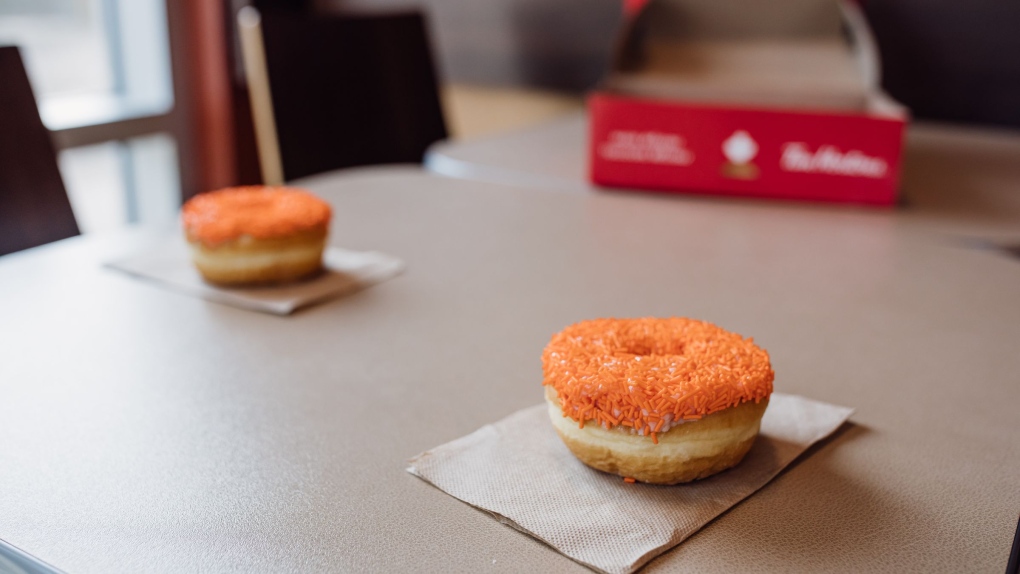 From Sept. 30 to Oct. 2, the Tim Hortons Orange Sprinkle Donut Campaign in Saskatchewan will help support the James Smith Cree Nation Community Fund as well as Indigenous organizations such as the Orange Shirt Society.

Tim Hortons made the announcement in a news release on Sunday. According to the company, half of the proceeds from this year’s campaign will go to the James Smith Cree Nation Community Fund.

The other half will be donated to the Indian Residential School Survivors Society as well as the Orange Shirt Society.

The announcement comes after James Smith Cree Nation was host to a tragic string of stabbings that left 11 people dead and 18 others injured.

In 2021, more than one million Orange Sprinkle Donuts were sold across Canada, raising over $1.6 million dollars for the Orange Shirt Society and the Indian Residential School Survivors Society, the release stated.

The Orange Sprinkle Donut campaign began last year, following the discovery of unmarked graves on the grounds of the former residential school in Kamloops, B.C.

Sept. 30 will mark the second year that the National Day for Truth and Reconciliation is observed in Canada. It will also mark 10 years since Orange Shirt Day was first observed on Sept. 30, 2013.

Alberta Premier Danielle Smith says her government is crafting changes to be debated next week to reverse the part of a bill that gives her cabinet unfettered power to rewrite laws behind closed doors without legislature approval.

It was a monumental occasion when Canada stepped onto soccer’s biggest stage in Qatar, and while its World Cup campaign ended miserably, there is still hope moving forward. CTVNews.ca takes a look at the three talking points ahead of the next World Cup in 2026.

Russia rejects US$60-a-barrel cap on its oil, warns of cutoffs

Russian authorities rejected a price cap on the country's oil set by Ukraine's Western supporters and threatened Saturday to stop supplying the nations that endorsed it.

Canadians can write to Santa in the language of their choice, Canada Post says, after some express confusion

Canada's housing advocate says during a tour this fall of several Inuit communities she got a glimpse into the dire living conditions many have faced for years.

Transport Minister Omar Alghabra says the upcoming holiday travel season is sure to be a busy one, but that he’s working with air travel stakeholders to ensure the summer’s flight cancellations and lost luggage problems aren’t repeated.