'To be able to walk out that door and not worry': Krav Maga Regina instills confidence, student says

'To be able to walk out that door and not worry': Krav Maga Regina instills confidence, student says

For 22 years, Richard Kim has owned and operated Krav Maga Regina. According to students, taking an introductory four-week course to Krav Maga has shown them what they have inside themselves when it comes to defending against an attack.

“Well, I’m not the same person I am now than when I started,” said Tanya Smith, a new student to the course.

Her sparring partner, Elizabeth Duclaux, said the course helps your reflexes and your mindset.

"It helps give you the confidence to know that you’re less likely to freeze,” she said.

According to Kim, that’s the goal.

“We don’t want our students freezing, we want them either getting out of there or fighting back, in order to run away,” he said.

Teaching this version of martial arts allows Kim’s clients to get a sense of a self defense quickly.

“It was a system designed to be learned quickly, it had to work for men and women, younger, older, athletic, non-athletic, and it was something for everyone and that was the biggest appeal to me,” said Kim.

Kim is a product of Tae Kwon-Do, which his father enrolled him in when he was 6-years-old.

But he believes that Krav Maga instills a confidence, especially in women, that they are strong enough to at least escape an aggressive attack.

Many women who sign up for the course are looking for that.

“Because I don’t want to be a victim and I don’t want to feel helpless … I wanted to at least know I could be aggressive if I needed to be,” Duclaux told CTV News after her fourth class.

“Yeah I’m stronger than I thought I was,” added Jenni Stardeski. “I just wanted to take a self defence course just for the knowledge of what to do if somebody did attack me.” 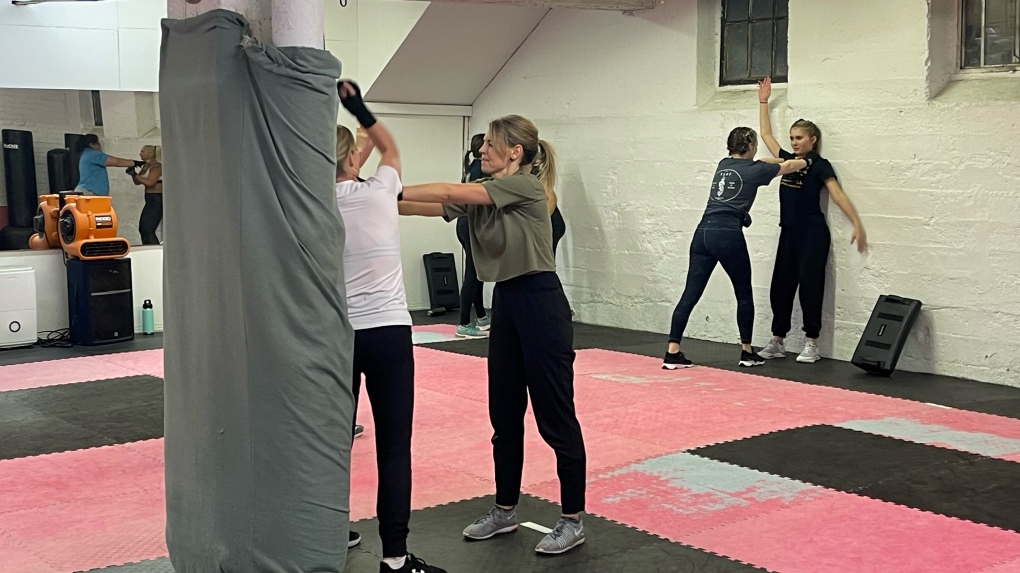 Smith added that most of the women in this four-week course came into their own by the end, saying there was a timidness at first, but looking around the room on Sunday night, she only saw a fierceness.

That’s what Naomi Hrynowetsky was trying to bring out in her daughter, Harloquinn, which is why she enrolled the mother-daughter duo in the class.

“She just started high school and she’s taking the bus by herself, and I just wanted to give her some more freedom, and just more independence,” said Naomi.

Harloquinn was throwing punches and kicks at full blow to her mother throughout Sunday’s class.

“I’ve learned a lot from it and that I’ll definitely use if something happens,” she said.

But while self defense courses are intended to teach how to escape an unwanted assailant, when it comes to defending against a sexual assault, Lisa Miller of Regina’s Sexual Assault Centre, said it’s a little more complicated than that.

“Most of the time its people we know and so are people able to access those self defense techniques when it’s coercive control?” Miller asked.

Almost 90 per cent of sexual assaults are committed by persons known to the victim, who can manipulate and emotionally abuse them.

Miller added that while self defense prompts a lot of great self confidence, having taken one of Kim’s 10 week courses herself, she worries about situations where a woman cannot fight off her assailant.

“How we respond is not something that happens inside the cognitive brain but the survival brain. Our brain makes very quick decisions on whether we’re going to flee, or fight, or freeze,” she said.

“If we’ve had past experiences where we have frozen because fighting back would not be a good option, people may resort to that, and not be able to access those skills.”

She warns people to not blame themselves should they still become a victim, especially of sexual assault, after taking any self defense course.

This is due to the fact that there are so many factors that go into how a person deals with different assailants.

However, that doesn’t mean that confidence cannot still be built in classes like Krav Maga Regina, Miller added.

“Anytime people have an opportunity to get outside of their comfort zone, and participate in things that can teach them a bit more about how much strength their bodies have, that can be really helpful in boosting confidence.”