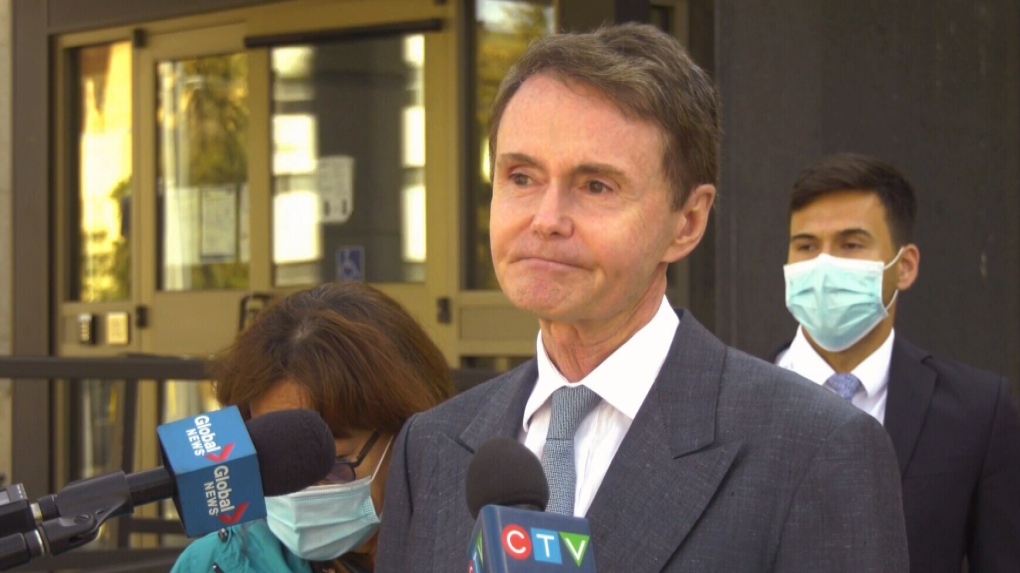 Tony Merchant speaks to reporters outside Court of Queen’s Bench in Sept. 2020.

The suspension follows a complaint in 2014, by a residential school survivor relating to funds withheld from the client who received a settlement under the Indian Residential School Settlement Agreement.

The complaint which was upheld alleged that Merchant was guilty of conduct unbecoming for a lawyer because he induced a client to provide an assignment (of funds) from a residential school settlement and acted upon that assignment “when such conduct was prohibited.”

Documents filed in the case claim Merchant Law Group (MLG) withheld $21,310.83 in settlement money from the client, to pay unrelated legal costs owed to the firm for previous cases including criminal cases involving the client’s son.

MLG claimed the client had agreed to use a portion of the funds to pay the outstanding legal costs, however, the terms of the settlement agreement prohibited awarded funds from being assigned.

In a letter to the client sent on April 7, 2014,Merchant encouraged her to honour the original agreement for payment, even though it was not enforceable by law.

“We could sue you for the $21,310.83. My expectation is we would succeed with that law suit and obtain a judgment against you. We could then seize your assets, your car, your bank account, or whatever, in order to collect these debts that you owe.”

After receiving the letter, the client signed documents agreeing to apply her settlement funds to unrelated legal accounts including her son’s outstanding accounts, the hearing documents read.

After the office of the Chief Adjudicator for the Independent Assessment Process was informed of the agreement between MLG and its client, MLG was instructed to repay the money.

Ian Pitfield, the Independent Special Advisor to the Court Monitor, wrote in October, 2014 there was no evidence that the client was obligated to pay her son’s accounts, adding “nor that she was provided independent legal advice prior to accepting any such obligation, nor that there was any consideration for the handwritten direction she had allegedly signed on April 7, 2014.” He also raised concerns that the Merchant letter to the client “suggested these funds were inappropriately procured.”

In October 2014, MLG sought direction in court to be entitled to retain the $21,310.83, due to the client’s previous written instructions. However, the British Columbia Superior Court ruled the funds were “impermissibly withheld” against the terms of the settlement agreement. The court directed MLG to pay the client the total back, with interest. The order was complied with.

The British Columbia Court of Appeal upheld that decision. Merchant’s attempt to seek leave to appeal the ruling to the Supreme Court of Canada was denied in August 2018.

The hearing committee noted the client is a member of a “vulnerable group,” adding Merchant used a “tone of disrespect and intimidation” in his interaction with her.

The hearing committee also noted a previous history of disciplinary action against Merchant in its decision, citing two recent similar instances of discipline against him.

“We have identified similarities in the conduct, which has involved efforts on the part of [Merchant] to escape the effects of court orders and legal requirements that he knew or ought to have known applied to the circumstances,” the decision read.

Merchant’s eight month suspension will begin in February 2021. The Law Society also ruled that he must pay the $10,643 costs of the proceedings.