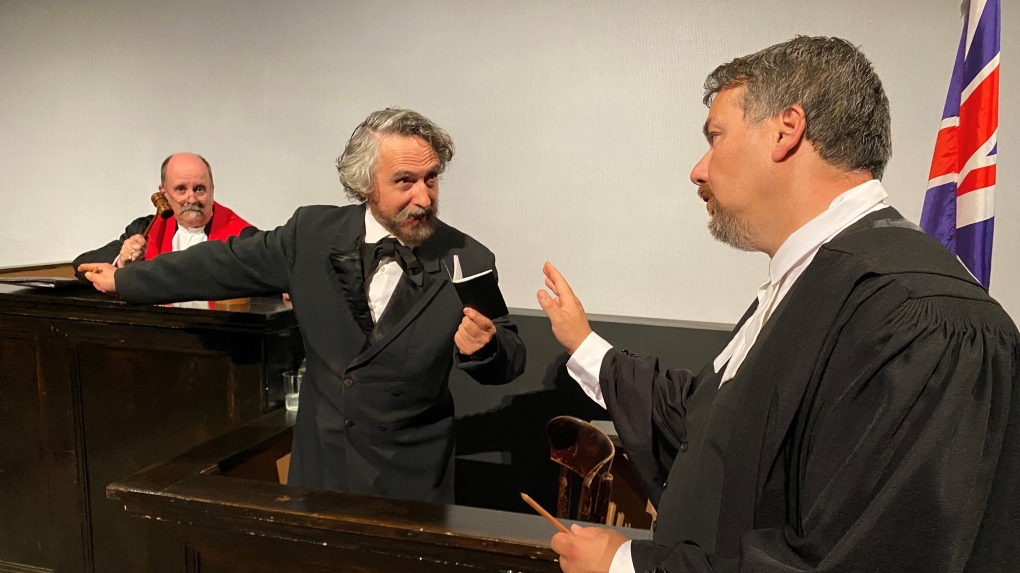 One of Canada’s most famous trials took place over 130 years ago, but Regina audiences can still get a front-row seat.

The Trial of Louis Riel has been performed in Regina annually for the past 55 years. This is the second year the play will take place at the RCMP Heritage center, a significant detail considering it is also near the spot of Riel’s hanging.

“It’s an honor and a responsibility to do this show the best it can be done in a place that has been for so long, known as the place where Canada hanged Louis Riel, this is where they lynched the hero of my people,” said actor John D. Huston, who plays Riel in the show.

The play depicts the famous trial which took place in 1885. Riel was tried for treason after leading a resistance movement by the Metis and First Nations people against the Canadian government known as the North West rebellion.

Written in 1967 by Joseph Coulter, the script draws directly from the trial.

“He actually took transcripts from the trial, boiled it down to an hour and forty-five minutes, got the commission, and went to work” explained Peter Champagne, another actor.

The show will be running from August 11-21 and tickets are available online.

Control over immigration and Quebec's religious symbols ban could be sources of conflict between Ottawa and the province as Premier Francois Legault begins his second mandate.

The bodies of Russian soldiers were lying in the streets of a key eastern Ukrainian city on Tuesday, evidence of a hasty retreat that marked a new military defeat for Moscow as it struggles to hang on to areas it illegally annexed last week.

CTV News has learned Prime Minister Justin Trudeau will be called to testify about his government’s decision to invoke the Emergencies Act in response to anti-mandate Freedom Convoy protests in February.

A power crew in Cape Breton went above and beyond their duties after a memorial plaque attached to a power pole was torn down during post-tropical storm Fiona.

6 California killings may be work of serial killer: police

Ballistics tests have linked the fatal shootings of six men and the wounding of one woman in California -- all potentially at the hands of a serial killer -- in crimes going back more than a year, police said.

Queen Margrethe II of Denmark has apologized after removing the royal titles of four of her eight grandchildren. She's not changing her mind about the move, however.

'I'm going to be the premier of all Quebecers': Legault elected with majority government

Francois Legault has been elected for a second mandate as Quebec premier with a majority government. Within eight minutes of the polls closing across the province at 8 p.m. EST, CTV News declared Coalition Avenir Québec has secured a resounding win in the Quebec legislature.

Families of missing and murdered Indigenous women seek change ahead of Oct. 4 vigils

A group of family members of Indigenous women killed across B.C. is calling for more police accountability and improved communication when investigating missing person cases across jurisdictions. The families spoke out on the eve of Canada-wide Sisters in Spirit vigils Oct. 4 to honour missing and murdered Indigenous women and girls.