'Truth must prevail': Cowessess chief reflects on a year of grief and prosperity

Community members of the Cowessess First Nation have been facing grief in waves and stages since the horrific discovery made at the former Marieval Indian Residential School in June.

Chief Cadmus Delorme described to CTV News the complexity of moving through a year full of pain, anger and new beginnings.

In June, Cowessess announced that 751 unmarked graves were discovered at the site of the former Marieval Residential School using ground-penetrating radar. 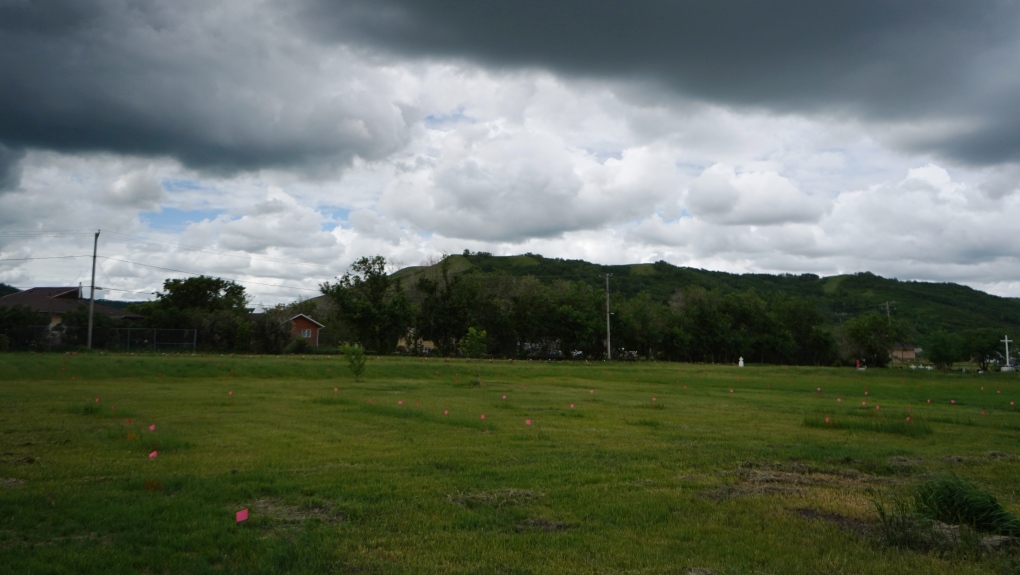 Flags mark where ground-penetrating radar recorded hits of what are believed to be 751 unmarked graves near the grounds of the former Marieval Indian Residential School on the Cowessess First Nation, Sask. in this undated handout photo provided by the Federation of Sovereign Indigenous Nations. A Saskatchewan First Nation says it has found 751 unmarked graves at the site of a former residential school. The Cowessess First Nation says ground-penetrating radar recently discovered the graves at the former Marieval Indian Residential School. THE CANADIAN PRESS/HO

Flags mark where ground-penetrating radar recorded hits of what are believed to be 751 unmarked graves near the grounds of the former Marieval Indian Residential School on the Cowessess First Nation, Sask. in this undated handout photo provided by the Federation of Sovereign Indigenous Nations.

According to the National Centre for Truth and Reconciliation, the school was constructed in 1899 by Roman Catholic missionaries. The Government of Canada began funding the school in 1901 and took over its operations in 1969. The school was turned over to Cowessess in 1987, who operated it until its closure in 1997.

Delorme said that the pain, frustration and anger at both the community and individual levels was underscored by validation.

“We always knew there were unmarked graves,” Delorme said. “The entire role residential school played in the mental, emotional, physical and spiritual, of individuals. Even intergenerational trauma today and how even a generation after residential school survivors how that still lives on in some family homes in kinship.”

He said truth needed to prevail before reconciliation could take place.

While survivors of the school and their descendants grappled with the discovery, Cowessess continued to strive for new heights with the development of its historic child welfare program.

Coming off the heels of the discovery that put an international spotlight on the community – Cowessess was transferred legal jurisdiction over its children in care by Prime Minister Justin Trudeau and Premier Scott Moe in July.

This marked the first time that control of child and family services has been restored to an Indigenous community under federal law. 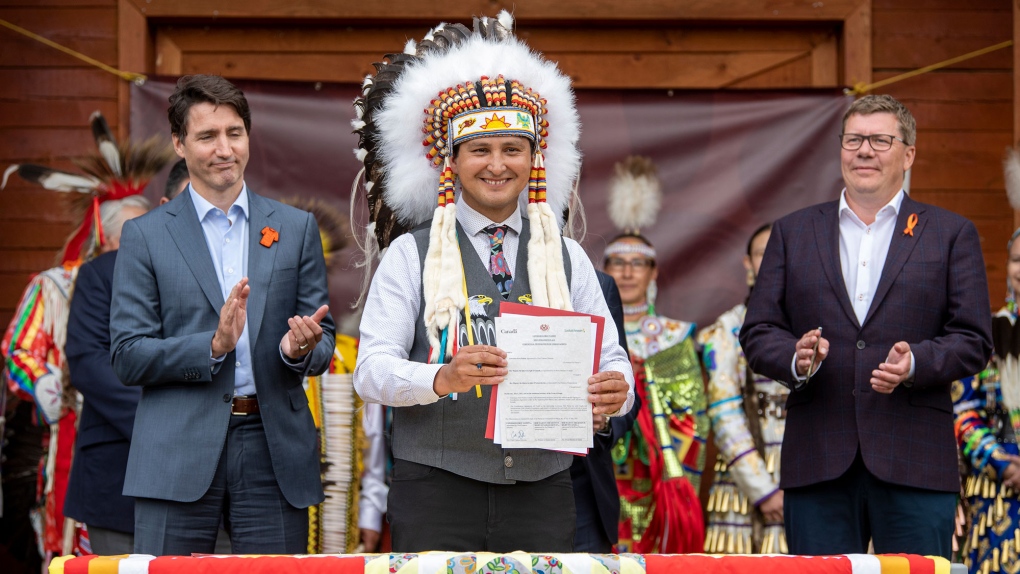 Prime Minister Justin Trudeau, left to right, Chief Cadmus Delorme and Saskatchewan Premier Scott Moe sign a document of a transfer of control over children in care to the community during a ceremony, in Cowessess First Nation, Sask., Tuesday, July 6, 2021. Cowessess is also the site of a former residential school where, last month, ground-penetrating radar detected a potential 751 unmarked graves. THE CANADIAN PRESS/Liam Richards

“The day that happened on Cowessess was an uplifting day for our nation, especially for our 751 that we shared the month before,” Delorme said.

“So it really drove our emotions from a very high state to a different high state of prosperity and optimism. It was a great day on Cowessess.”

Cowessess has already repatriated children in government care back to their home community and invested in cultural and kinship programs for their benefit.

The program developed by Cowessess was supported by a $38.7 million investment from the federal government, which will help get programs at the new Chief Red Bear Children’s Lodge off the ground.

The historic achievement by Cowessess is serving more than just one community. More than 38 Indigenous governments, representing more than 100 communities, are currently seeking to exercise jurisdiction over child and family services under the Act.

NATIONAL DAY FOR TRUTH AND RECONCILIATION

Sept. 30 was a collective day of learning and listening to Canada’s Indigenous people, as the country marked its first-ever National Day for Truth and Reconciliation.

The significance of the day was felt deeply on Cowessess First Nation following a year of grief and prosperity.

The community had not touched the site of the former residential school since it was demolished in 1998, but Delorme said in preparation for the new holiday the area was redeveloped to host ceremonies, singing and dancing.

“A place where children looked out a window, unable to really learn and strengthen their culture, that’s what we did, “ Delorme said. “Outside those windows we danced, we sang, we said our language, we cried and laughed.”

“At the end of the day, that place has some uplifting to it.”

The actions -- or more notably, the inaction -- of a school district police chief and other law enforcement officers has become the centre of the investigation into this week's shocking school shooting in Uvalde, Texas.

As Russia asserted progress in its goal of seizing the entirety of contested eastern Ukraine, President Vladimir Putin tried to shake European resolve Saturday to punish his country with sanctions and to keep supplying weapons that have supported Ukraine's defence.

A 31-year-old disabled Toronto woman who was conditionally approved for a medically assisted death after a fruitless bid for safe housing says her life has been 'changed' by an outpouring of support after telling her story.

Federal Conservative leadership candidate Patrick Brown says calling social conservatives 'dinosaurs' in a book he wrote about his time in Ontario politics was 'the wrong terminology.'

She smeared blood on herself and played dead: 11-year-old reveals chilling details of the massacre

An 11-year-old survivor of the Robb Elementary School massacre in Uvalde, Texas, feared the gunman would come back for her so she smeared herself in her friend's blood and played dead.

Speakers at the National Rifle Association annual meeting assailed a Chicago gun ban that doesn't exist, ignored security upgrades at the Texas school where children were slaughtered and roundly distorted national gun and crime statistics as they pushed back against any tightening of gun laws.

A scientific analysis commissioned by the FBI shortly before agents went digging for buried treasure suggested that a huge quantity of gold could be below the surface, according to newly released government documents and photos that deepen the mystery of the 2018 excavation in remote western Pennsylvania.

Indiana police disclose cause of death of young boy found in a suitcase. They are still trying to identify him

An unidentified child who was found dead in a suitcase last month in southern Indiana died from electrolyte imbalance, officials said Friday.