An opinion article about Canada Day that ran in a local Saskatchewan newspaper has created controversy due to its claims about residential schools.

The piece titled “We have nothing to be ashamed of on Canada Day” offended some Indigenous people and allies in southern Saskatchewan.

Indigenous activist Summer Stonechild was shocked when she found the article after coming out of a Sundance ceremony.

“It was very disturbing to come out of a ceremony and understand that this publication was made available in Treaty Four,” she said.

The article, written by columnist Brian Giesbrecht, was published in the Fort Times, a local newspaper in Fort Qu’Appelle, Sask.

“I was trying to wish everybody a Happy Canada Day, and I was also trying to assure people that Canada is not a genocidal country,” Giesbrecht said of the article.

The article criticized Kevin Annett, a former minister of the United Church of Canada, for “inventing” stories of priests murdering children and hiding the bodies, and those who believe what Giesbrecht calls “conspiracy theories.”

“I’m calling them conspiracy theories because that’s what they are,” Giesbrecht said.

Giesbrecht said he believes there are legitimate searches of burial sites for children from remote communities who died of diseases.

“There was simply no way of even notifying the parents that the child was sick,” he said.

Stonechild is calling on the Fort Times to retract the story. 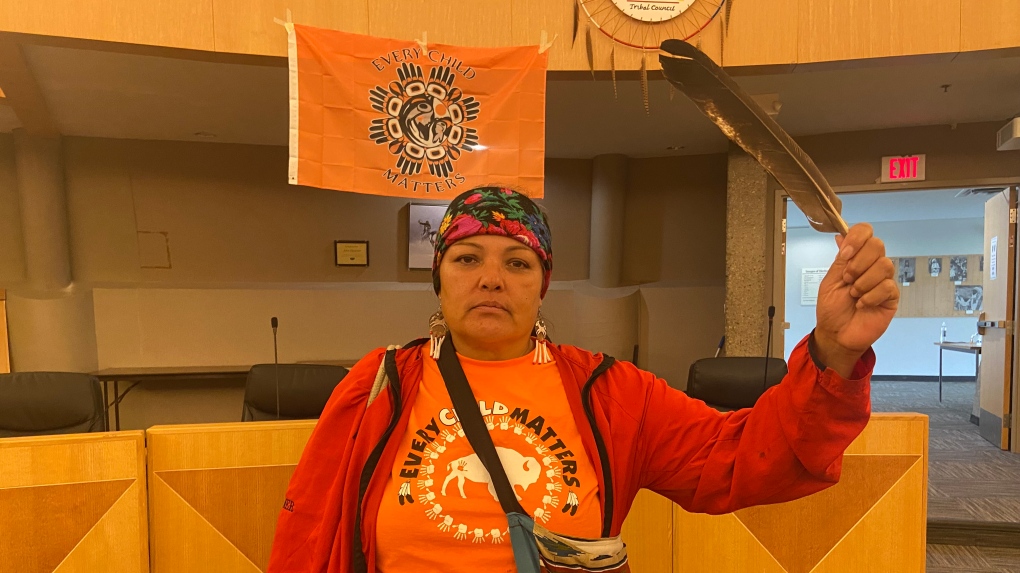 “People have a hard time believing our traumas because they were kept apart from the real stories,” Summer Stonechild said.

Grasslands News Group, the publishing company behind the Fort Times, said the opinions expressed in the column do not reflect those of the publication itself, in a statement to CTV News.

“It was an opinion of someone who we felt our readers are entitled to see,” Grasslands News Group said.

However, one local business was so upset with the article that they decided to stop dealing with the newspaper altogether.

“We decided to pull it, our customer base is mainly Indigenous peoples,” Jenna Cyr, the manager of Becky’s Place, a business in Fort Qu’Appelle, said, “We decided to not advertise with them as well.”

Grasslands News said it hoped the article would spark conversation around reconciliation.

While being interviewed, Stonechild held a feather and sweet grass to symbolize her support for reconciliation.

“I don’t discredit our non-Indigenous community for wanting to celebrate [Canada Day] but there needs to be a reflection on the truth behind what Canada is,” Stonechild said.

Quebec Cardinal Marc Ouellet, once considered a front-runner to become pope, has been accused of sexual assault and is among a list of clergy members and diocesan staff named in a class-action lawsuit against the archdiocese of Quebec. A woman identified as 'F.' in court documents tabled on Tuesday accused Ouellet of several incidents of unwanted touching.

Parents of young children may need a prescription for over-the-counter fever and pain medication due to a shortage at some pharmacies, Toronto's Hospital for Sick Children is warning.

A B.C. man, who was among the first Canadians approved for Canada's Vaccine Injury Support Program, says he is frustrated with the length of time it is taking to receive compensation.

The wolves that were found outside their enclosure at the Greater Vancouver Zoo Tuesday appear to have been freed on purpose, according to officials.

The senior Mountie who made allegations of political meddling in the investigation into the 2020 Nova Scotia mass shooting defended his position to members of parliament Tuesday.

OPINION | Economists are forecasting a recession in Canada, how should you prepare?

The next time the Bank of Canada raises interest rates on the scheduled date of September 7, 2022, it could potentially trigger a recession. Although there may be a chance that we don’t enter into a recession and the BoC is still hoping for a soft landing, it’s best to be prepared. Contributor Christopher Liew explains how.