REGINA -- To quote the late Bill Paxton in the wonderful weather movie Twister...

"Why can't we spend a normal day together?!"

That's the stage of Summer we're at weather wise. Storm season has just begun and it's already been really active, days will feature normal parts but they'll rarely stay that way.

During the course of the storm season in Saskatchewan we get an average of 13 tornados, last weekend we had three in one day! On Saturday, July 4 during the afternoon and evening a cyclical tornadic supercell thunderstorm moved through Southern Saskatchewan. This big baddie of a storm not only produced three separate tornadic events but also threw softball sized hail from the sky. Surprisingly the reported damage from these storms was minimal 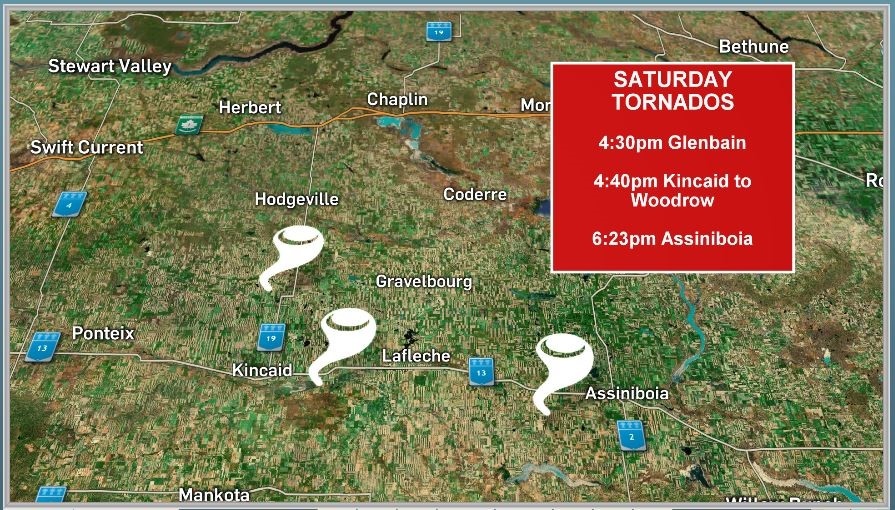 The first tornado touched down near Glenbain, Sask. around 4:30 in the afternoon, no damage was reported from this event. Number two happened just 10 minutes later at 4:40 near Kincaid. This time it stayed on the ground for approximately 40 minutes and moved Eastward towards Woodrow. Damage to a home and farm property was reported and investigated from this event. The storm continued on towards Assiniboia and near that community another touchdown occurred, around 6:23. Once again no damage was reported.

On Sunday, June 30,1912 the deadliest tornado in Canadian history hit the city of Regina. The Regina Cyclone started to develop at about 4:50 p.m., green funnel clouds formed and touched down South of the city. It tore through the residential area between Wascana Lake and Victoria Avenue, continuing through the downtown business district, rail yards, warehouse district and Northern residential area. There were a total of 28 fatalities. 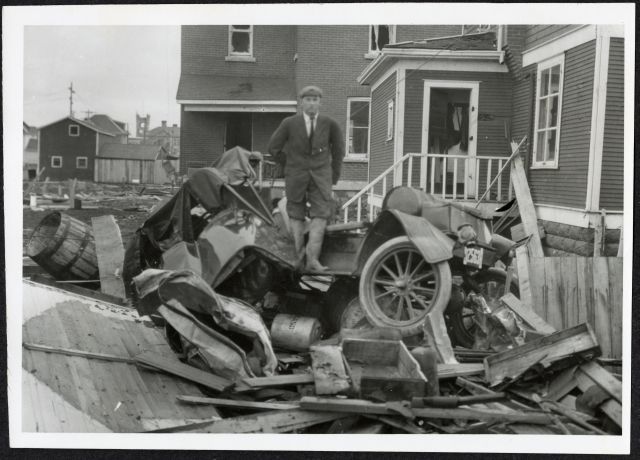 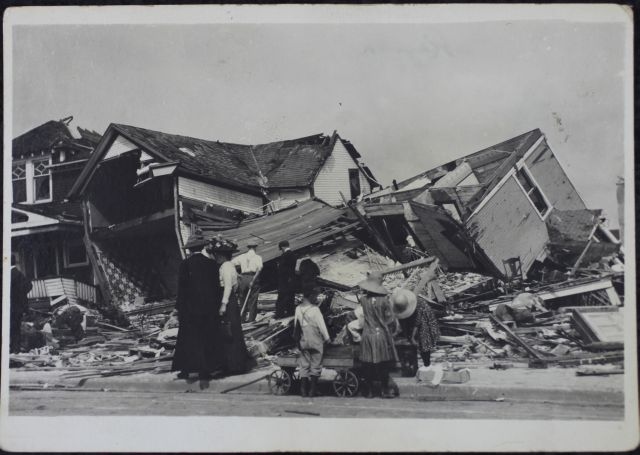 Photos sourced from the Provincial Archives of Saskatchewan.

After things from the weekend settled down they ramped back up on Tuesday, July 7. A large line of storms from around the Swift Current area to Southern Montana moved across Southern Saskatchewan. This line of intense storms brought severe wind gusts, large hail and heavy rain. The Southwestern corner took the brunt of these storms once again.

Environment and Climate Change Canada (ECCC) recorded the top wind gust at 141 km per hour at the Mankota station. Two other stations were in triple digits, Coronach at 139 km per hour and Val Marie at 117 km per hour. Nickel sized hail was reported in the Golden Prairie area and reports of trees being snapped came in from near Hazenmore.

Once this line of storms subsided a large area of low pressure developed and moved slowly through Central Saskatchewan. The Northwest side of this system dropped large amounts of rain and a good portion of that also slide through the Southwestern corner of the Province. The 24 hour accumulated precipitation, as of 11 a.m. Wednesday July 9, for North Battleford was 133.8 mm or around 5 inches. Localized flooding happened in North Battleford and Swift Current as city drains couldn't keep up to the downpours. The average rainfall for the whole month of July in North Battleford is 74 mm or 3 inches, they recieved almost double in 24 hours! 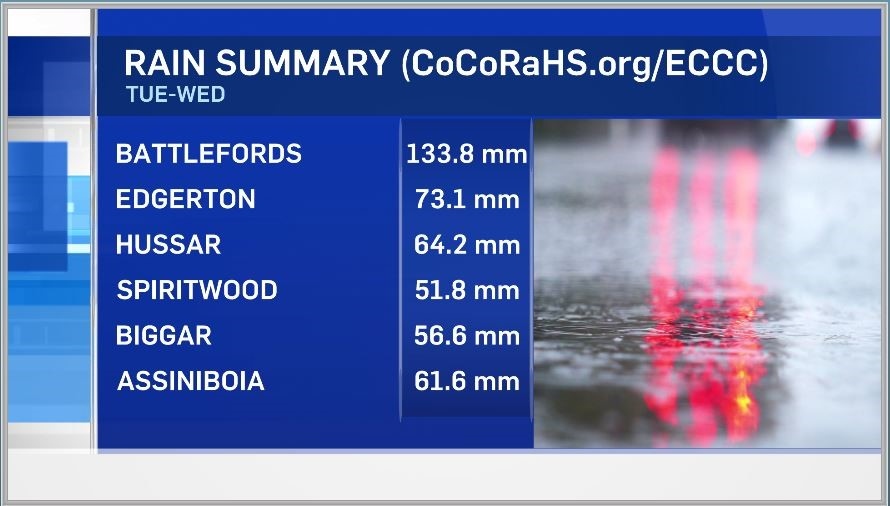 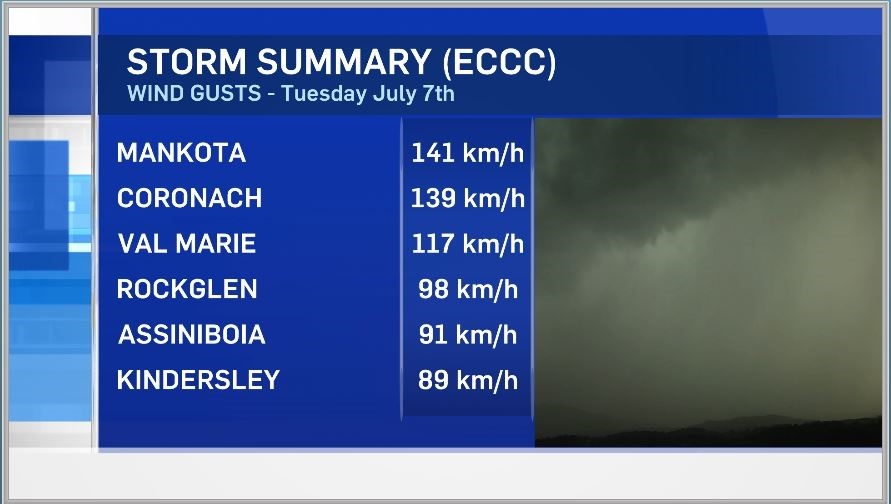 As we continue to move through the month of July we'll stay unsettled for the next couple of weeks. Now that moisture has blanketed the Province daytime heating will continue to produce the risk of thunderstorms on an almost daily basis.

Moisture breeds more moisture. If you're looking for a consistent nice day this weekend it will be Saturday. Temperatures will be seasonal and the sun will stick around all day.

Sunday afternoon the trouble starts to bubble up once again and we'll watch for more thunderstorms scattered through the Province.

To report severe weather at any time you can call ECCC at 1-800-239-0484, send an email to skstorm@canada.ca or Tweet using the hashtag #skstorm. 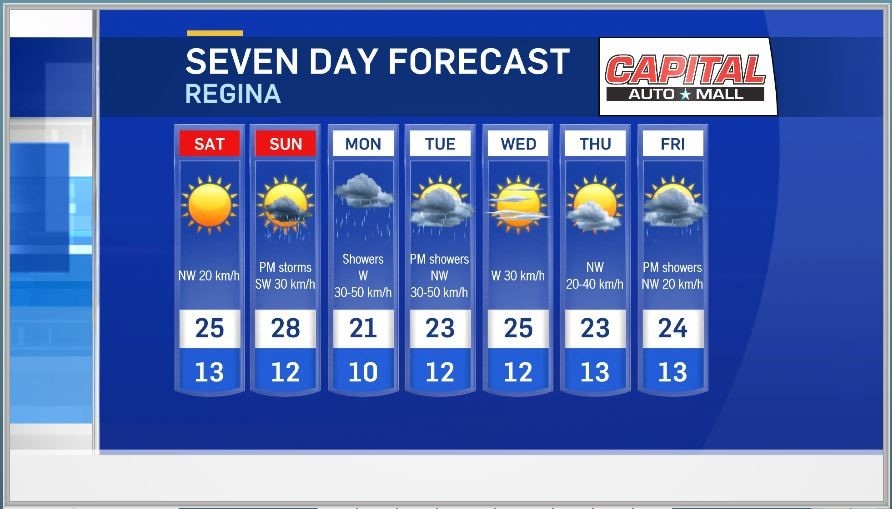