'We need to fight for people of colour': Regina man speaking out about racial profiling after false accusations in Facebook post

The post was made on the page for the neighbourhood of the Greens on Gardiner on Monday. It showed two photos of a man with a bicycle getting into a vehicle with a caption that said, “Lock your doors,” implying the man was breaking into it. 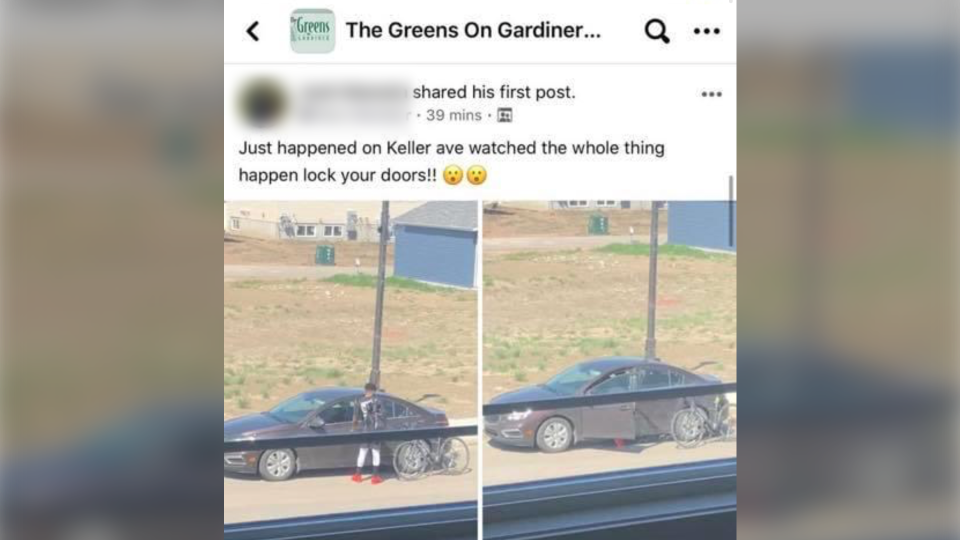 Christian Mbanza is the man in the post and the owner of that vehicle. He said he was just getting something from his car before going for a bike ride.

Mbanza said the person who posted those photos of him believed he was a thief because he is black.

“The funny thing about this neighbourhood is, it’s a pretty diverse neighbourhood,” Mbanza said. “There’s all kind of people, so I don’t know what the motive behind posting that was other than racially profiling.”

Mbanza said he found out about the post from friends. He had a mix of emotions when he finally saw the post.

Mbanza chose to make his own post in response to the false accusations in the original post.

“A recent example of how your racial biases affect your judgement.” Mbanza said in the post. “The timing of this is crazy,” making reference to the death of George Floyd in Minneapolis, Minnesota, and the protests that have swept across the United States.

His post has been shared more than 2,000 times on social media.

“You need your whole community to fight for you,” Mbanza said. “Fight along side with you and I think that’s what the movement are all about. We need to fight for people of colour.”

A grade seven teacher, Mbanza said he will use this incident to educate his students about racism and why it needs to end.

“Everything hit differently when it hits home,” he said. “They’re going to see that this is somebody that they enjoy having around, that is happened to them, it can happen anywhere.”

Others from the Saskatchewan community are now sharing their experiences with racial profiling.

Former Saskatchewan Roughrider, Matt Dominguez was pulled over by police in Georgetown, Texas when he was 19-years-old.

He was arrested and put into the back of a police cruiser while officers searched his vehicle. He said that incident changed his life.

“While I’m in the back of the car, I’m so angry and hurt,” Dominguez said. “This was the community that I grew up in and was born there. People has cheered for me, for the touchdowns I had scored. None of those things mattered. All that mattered was I was not driving the car that they expected me to be driving.”

Dominguez said he personally hasn’t experienced much racism in Regina, but that hasn’t been the case for his wife.

“This has been happening for decades,” Dominguez said. “People of colour have been saying this is happening. This just happened to me. When you see these things happening and somebody gets video of it and brings some humanity to it, but it’s not new.”