WEYBURN, SASK. -- A Saskatchewan parent has built the ultimate backyard rink, turning his shed into a small hockey arena, so his children could stay active during the winter.

Weyburn’s Dean Schenk was motivated to go all out on his backyard rink this year due to the uncertainty surrounding team sports caused by the COVID-19 pandemic.

“I thought I’d switch it up and I usually build one in the backyard but I wanted to change it up this year and do something special,” Schenk said.

For the past four years, Schenk has spent hours building an outdoor rink behind the shed. He’s always trying to improve on his craft year to year and this was his first attempt at an indoor barn. It took him a week.

His two children Ashton and Emily have been enjoying the new rink so far.

“It’s definitely is a lot of work a lot of cold nights out there but it’s, within a matter of minutes when you see the smile on the kids faces, it makes it worth it,” Schenk said.

Ashton is eight-years-old and plays for the Under 9 Knights. In previous years, he’s enjoyed skating outside but isn’t complaining about the shift.

“The difference is when it’s windy or cold outside we can just come in here,” Ashton smiled.

It took the father of two a week to build the indoor rink. He considered all the details, including painting logos on the boards. 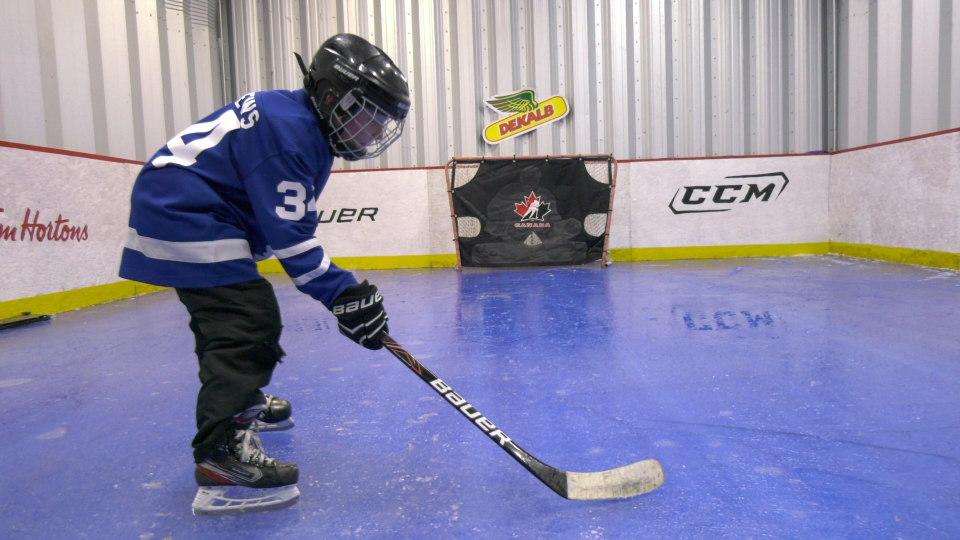 “I started with the tarp and then filling it obviously, had to let that freeze really well. We’ve been unusually warm this time of year,” Schenk explained. “I spent a whole weekend painting up the boards and getting them ready and then once the ice was frozen I was able to put the boards in and away we go.”

He even fashioned a homemade Zamboni from a large bucket.

“I fill it with hot water, open my valve and set how much water I want coming out and drag it around the ice and it makes it nice and smooth again after a full day of skating,” Schenk said.

Schenk completed the project at the end of November, and said the kids can’t get enough of it,

“They were out here by 8 a.m. and I think they probably put in a good 5 hours here on Sunday,” Schenk said. “It’s not uncommon to even come out for a quick skate before school.”

For those looking to break the ice and build their own backyard rink, indoors or outdoors, Schenk suggests starting small. He also recommends talking to people who have done it before and learning from their mistakes.

“Having it on perfectly flat cement, it used a lot less water and resources,” Schenk explained. “It doesn’t take long to throw some boards up and get a tarp from a local hardware store. You can order custom ones online and some water and away you go!”

Schenk says each year he’s challenged himself to raise the bar. But he doesn’t know how he’ll top this rink.

“I mean the kids are obviously a little spoiled now moving indoors” laughed Schenk. “I don’t know if we will be able to go back outdoors.”