WEYBURN -- A young girl in Weyburn has found a crafty way to bring awareness to Huntington’s disease, something that has closely affected her family.

Sophie Pollock, 9, has made hundreds of keychains to sell with the proceeds being donated to the Huntington Society of Canada.

“It’s for something that makes me happy that I want to do it, and it’s really fun to make different designs,” Sophie said. “My great grandma had it and so I wanted to help families that were affected by it feel more happy and safe.”

Huntington’s disease is a hereditary neurodegenerative illness with physical, cognitive and emotional symptoms.

Sophie’s great grandmother died as a result of the disease in 2012 and since then, the family has fundraised every year.

With limited options this year due to the COVID-19 pandemic, they decided on keychains because of Sophie’s love for crafts.

The keychains offer words of encouragement and each one has a dragonfly pendant.

“They have dragonfly wings because in the HD community, dragonflies are a symbol of hope,” Sophie explained. 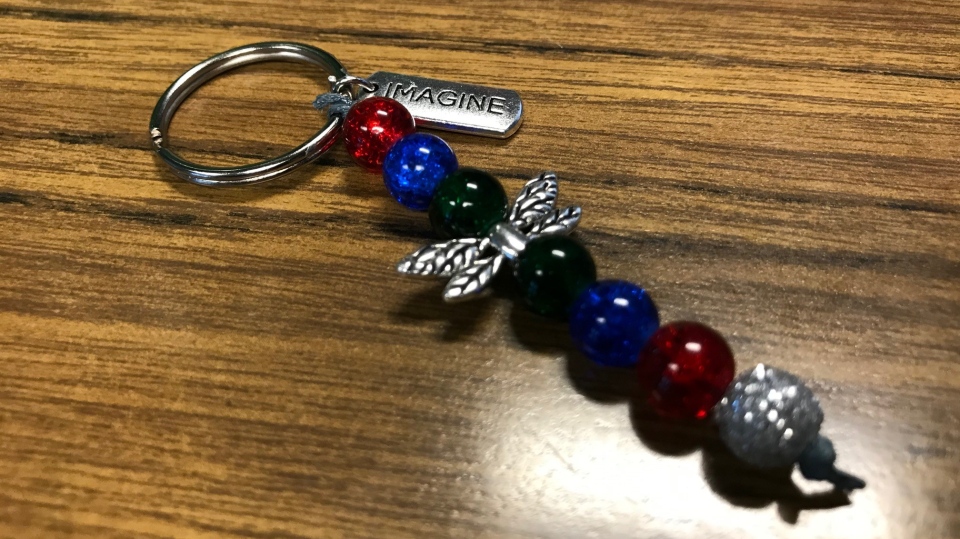 The family initially thought Sophie would make a few dozen to sell to friends and family, but word spread fast.

“We have sent keychains across Canada, to not all of the provinces and territories but from B.C. to Newfoundland, most of them and a couple to the United States as well,” Lisa said.

The keychains have also caught the attention of local politicians. Weyburn Mayor Marcel Roy has donated to the cause, and Saskatchewan Premier Scott Moe sent his acknowledgments on Twitter.

9-year old Sophie Pollock of Weyburn has been making keychains to raise awareness for Huntington’s Disease, a fatal brain disorder, and money for @HuntingtonSC.

Thank you for the keychain, Sophie, and great work!

Bulk batch sales of the keychains have wrapped up, but Sophie is not quite done making them.

“We’re going to probably sell flash sales on our Facebook page and then sell them on the campgrounds I’m going to,” Sophie said. “I hope they feel hope and happiness.”

The family said anyone who is interested in purchasing a keychain should keep their eye on her Facebook page for the sales.