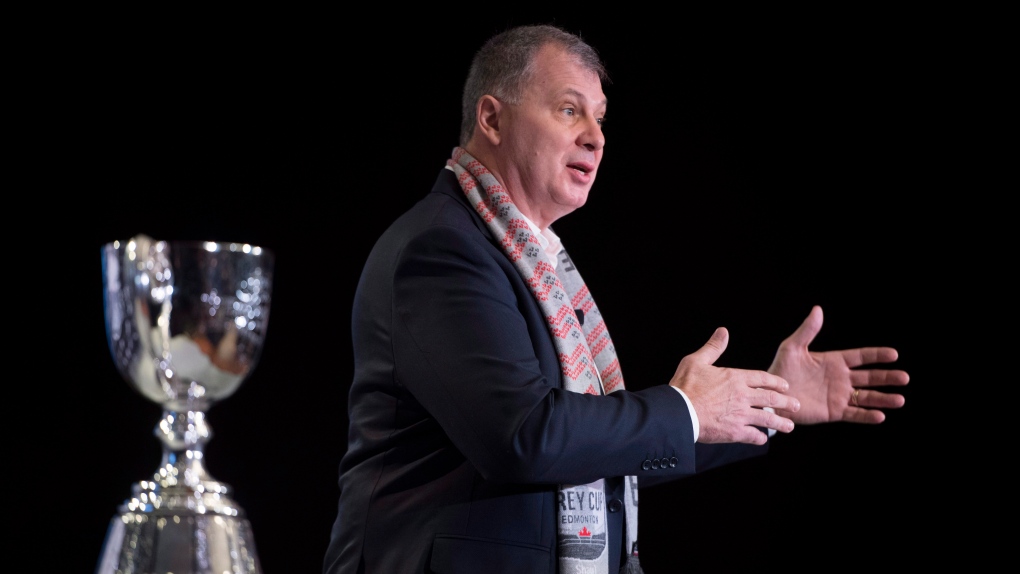 CFL Commissioner Randy Ambrosie addresses the media during the State of the League news conference at Grey Cup week in Edmonton, Friday, November 23, 2018. The Ottawa Redblacks will play the Calgary Stampeders in the 106th Grey Cup on Sunday. (THE CANADIAN PRESS/Jonathan Hayward)

Ambrosie addressed the state of the league after the CFL cancelled its season due to the COVID-19 pandemic.

“We got knocked down, but like great football players, we’re going to get right back up and get back into the huddle and look forward to the next play,” Ambrosie said during a virtual interview with TSN’s Sara Orlesky.

The commissioner has faced criticism as one of the only leagues in North America that didn’t resume play in the pandemic.

The CFL also laid off a bulk of its staff and didn’t compensate players.

As well, it seems like a CFL season in 2021 may rest in the hands of pharmaceutical companies.

“We had Pfizer come out with its vaccine, and this morning we woke up to the wonderful news that Moderna looks like they've got a vaccine. So there's lots of reasons to feel optimistic,” Ambrosie said.

Earlier in the summer, the league was denied funding requests from the federal government on multiple occasions.

Ambrosie says the league is looking at many ways to raise capital. However, he didn’t offer unique solutions.

“The single best solution for the CFL, in respect of our plan going forward, is to be able to get our stadiums opened up, to get our players back on the field and to get our fans back in the stands,” he said.

The CFL’s biggest revenue stream is ticket sales, he said. The Riders derive over 50 per cent of their net income from gate sales.

The TSN broadcast partnership and league sponsorships are other contributors to the bottom line.

However, the CFL has no fundraising plan but will release a game schedule soon.

“As soon as I see that we’ve got sign-off from all of our stakeholders, we’re going to publish a schedule very, very soon,” Ambrosie noted.

Training camps are just over five months away, but there are still border restrictions with the United States.

Americans make up a large portion of each roster, and it’s unclear how they would be able to cross the border to compete.

“[As] the vaccine starts to find it’s way into our communities, that border restriction will change and we’ll start to see the border opening,” Ambrosie said.

The commissioner said he hopes the work they do now to improve the league will leave a lasting legacy for years to come.

“In terms of the reset of our business model, it’s been comprehensive,” he said.

Ambrosie said the league is considering multiple scenarios for 2021.

Grey Cup Unite continues Tuesday with a business summit and concludes on Sunday.