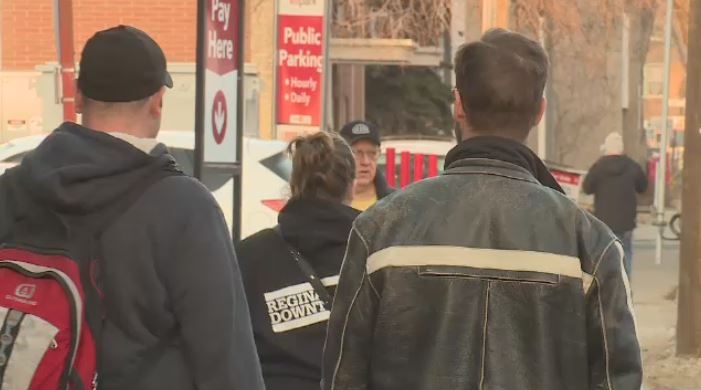 Volunteers walk through Regina for a point-in-time count on April 18, 2018

The Regina YMCA says it has a five-year plan aimed at ending homelessness in the Queen City.

The plan will cost an estimated $63 million, the organization says. The program itself will cost $38 million, with an additional $25 million in capital costs.

“The real cost, when the human, health and social benefits are considered, is far less,” the YMCA said in a news release.

That money will help support around 2,200 intakes of people of the next five years and covers chronic and episodic homelessness in Regina.

According to the YMCA, the investment in this plan will result in 50 cents recuperated into the public systems.

“If the status quo in Regina were to remain, it would cost public systems approximately $75 million over the next five years,” the YMCA said. “If this plan is fully implemented, providing housing and supports for those same individuals will avoid about $37 million in costs to major public systems in the same timeframe. Ultimately, it is cheaper to house and support individuals than it is to allow them to remain homeless.”