Emergency crews remained on the scene of an apartment fire in Yorkton, Sask. on Tuesday afternoon that could be connected to arson.

RCMP have confirmed the first fire was not suspicious.

“We were at this location last night, the fire was out and this fire started in a totally different place,” he said.

Crews then responded to a second fire around 4:30 a.m. Tuesday. This time the building was completely engulfed in flames.

The second blaze may have been arson, according to Morrissey.

“We are fairly certain it’s [been set] by hand, there was evidence of an intrusion when we came back,” Morrissey said. 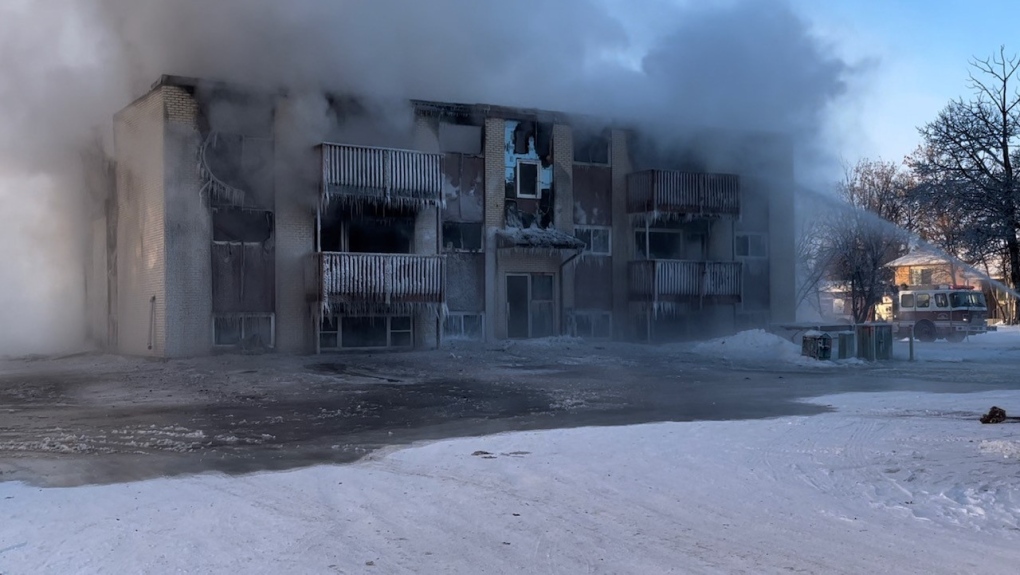 Morrissey said right now there are no casualties but added that could change once more searches are conducted.

“Firefighters got halfway through a secondary search, but there was an explosion on the second floor, so we had to stop there,” he said.

Two people trapped on the building’s third floor were saved by rescuers, according to Morrissey.

Meanwhile, residents near the apartment complex have been asked to evacuate due to a natural gas leak that could escalate to an explosion.

Daniel Lerat said he has lived on the second floor of the building, known as Riverview Place, for almost a year and is still in disbelief.

He said he has lost everything to the fire.

A local business called Extravadance is accepting donations at its’ Yorkton, Canora and Preeceville locations for thos who lost property in the fire. The owner, Kristin Webber, woke up Tuesday morning and decided to help after she heard the news.

“Basically, if you look around your house and anything you have, they have none of that,” she said.

Organizations such as the Red Cross, Victim Services and the nearby Yorkton Alliance church have also helped the displaced residents.

Radioactive capsule that fell off truck found in Australia

Authorities in Western Australia on Wednesday recovered a tiny but dangerous radioactive capsule that fell off a truck while being transported along a 1,400-kilometre Outback highway last month in what an official said was like finding the needle in the haystack.

An Alberta First Nation is to sign an agreement today with Ottawa giving it the autonomy to administer its child welfare.

Health Canada is encouraging Canadians to check their cupboards and kitchen tables as the agency has recalled more than 30 types of Indigo-branded items including ceramic mugs, mug ornaments and houseware products due to potential mould contamination.

Tom Brady retires, insisting this time it's for good

Tom Brady, who won a record seven Super Bowls for New England and Tampa, has announced his retirement.

'We're all Tyre': Family prepares to lay Nichols to rest

The family of Tyre Nichols plans to lay him to rest on Wednesday, three weeks after he died following a brutal beating by Memphis police after a traffic stop.

A suspect in a violent kidnapping in Oregon died of a self-inflicted gunshot wound Tuesday night after being taken into custody following a standoff with law enforcement, a police spokesman said.

A new report from the Heart and Stroke Foundation of Canada is highlighting 'significant inequities' in women's health care that is disproportionately affecting racialized and Indigenous women, members of the LGBTQ2S+ community and those living with low socioeconomic status.

Las Vegas police on Tuesday arrested and raided the home of a former 'Dances With Wolves' actor turned alleged cult leader accused of sexually assaulting young Indigenous girls during a period spanning two decades, according to police records obtained by The Associated Press.