YORKTON -- A Yorkton man is putting himself through the paces in an effort to raise money to help people access clean drinking water in developing countries.

Matt Erickson is taking part in World Vision’s Global 6K for Water – an event where participants walk six kilometres, the average distance a woman or child in a developing country walks for water, according to the organization.

Erickson and his wife have been sponsoring kids through World Vision for about 15 years. They heard about the annual walk in 2018.

“I’m a pastor and a personal trainer so it seemed like…right up both my alleys,” said Erickson.

This year he decided he wanted to raise a little more money ahead of the main walk on Saturday.

At the beginning of May, Erickson posted a video to his Facebook page telling people he’s going to make the six kilometre roundtrip walk to Save on Foods to re-fill the family’s water jug.

“It's pretty accurate to what other people actually have to do on a regular daily basis...so it seemed like a way to put myself through a little bit of it and just raise some awareness and some money for it," explained Erickson.

His first walk brought in a few donations, so he decided to ride the momentum and increase his fundraising goal for a second walk.

Erickson reached out again, upping the goal to $750, with a three kilometre walk carrying two jugs of water, which equals out to about 80 pounds. 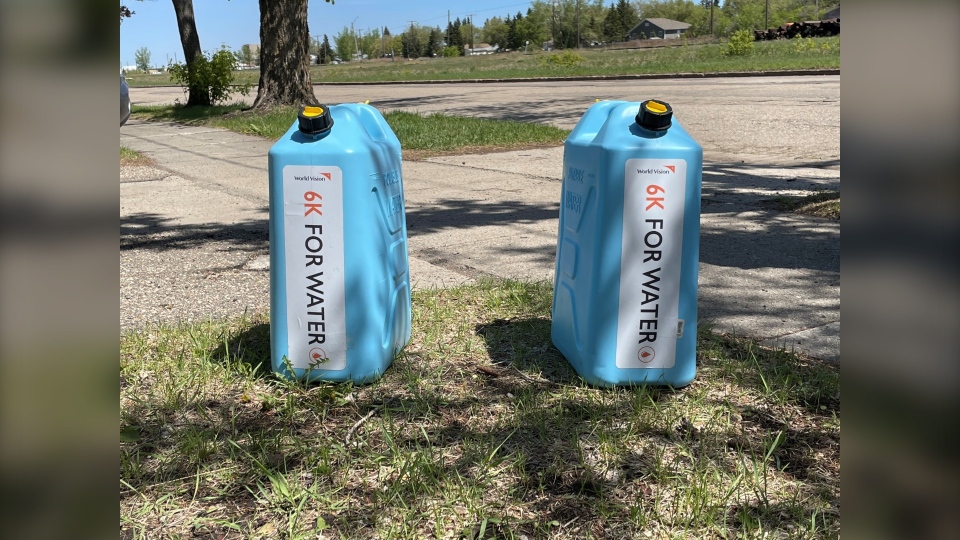 Erickson had raised around $1,100 before making his second walk over the May long weekend.

“[I] just did a little loop around the neighbourhood, mapped it out, it came to just over three kilometres. I couldn’t make it exactly, but I didn’t want to go less and it took me over 70 minutes.”

The virtual main event – which will be Erikson’s third and final walk – kicks off Saturday morning and will see people all over the world head out to walk six kilometres after an opening ceremony.

Erickson, his wife and two young kids will be walking their distance around Yorkton, and he hopes to see his fundraising efforts hit $1,500.

People looking to participate can also still register on the World Vision website.

“It’s not too late…it takes on average $50 to provide sustainable water for one person, so it’s a very affordable thing to make a real difference,” said Erickson.