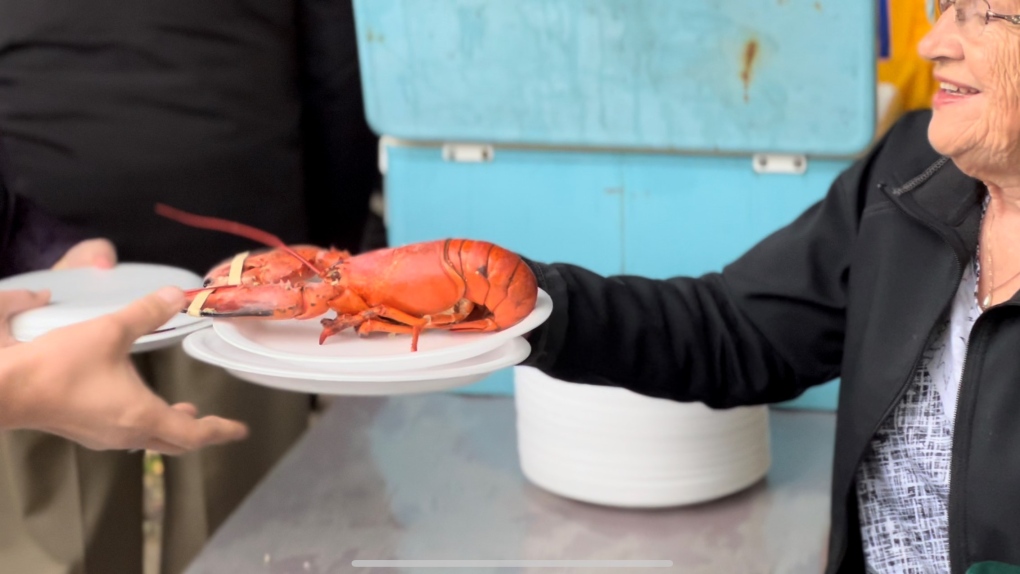 Lobsterfest was one of the many attractions at the newly returned Yorkton Film Festival. (Brady Lang/CTV News Yorkton)

One of the Yorkton Film Festival’s (YFF) premier events has come and gone, as “Lobsterfest” kicked off Friday night from the Yorkton Wildlife Federation Clubhouse.

Cancelled for two years due to the pandemic, the event is usually hosted yearly by the Yorkton Lions Club. Over 500 tickets were sold for the event, with guests able to choose between lobster and steak.

The event allows for a more laid back setting where industry executives and filmmakers from across Canada get to kick back and spend time together, getting a taste of Saskatchewan along with the Maritimes.

Fresh lobster is always shipped in from the east coast for those attending YFF, along with many from Yorkton and area taking in the festivities.

Rebeca Ortiz is a filmmaker from Toronto. 2022 is her first film festival, and she already had a positive outlook on the community and the festival just a few hours after arriving by plane.

“I love it. It’s got a lot of beautiful greenery. Everything's great. Everything's beautiful. I love to be here in springtime. This lobster fest is amazing,” she said. “This film festival is a great way to meet other filmmakers across Canada.”

Her experience at Lobsterfest though, it’s something she says she won’t forget.

This event, and the YFF as a whole, has quite the following. Many filmmakers make it an annual trip out to Yorkton to take in the event, along with the local culture.

Richard Wright is at his second film festival, and represented Saskatoon’s Alchemy Animation.

“This kind of event adds a lot to (the students’) education because with people that are doing this for a living and get to meet people, you get to figure out how to like make this a career,” he said.

“We are just lucky (the film festival) exists here in Saskatchewan. That (students and young filmmakers) can come to you on a yearly basis. And more importantly, it's the longest running film festival in North America. So it's just a gigantic opportunity for (the) up and coming filmmakers.”

Skeet shooting was offered at Lobsterfest, with trained professionals showing the filmmakers the ins and outs of it. It drew a crowd, with many of the filmmakers trying it for the very first time.

The Yorkton Film Festival wraps up Saturday night with the Golden Sheaf Awards at 8 p.m.

Prime Minister Justin Trudeau announced more money for Ukraine -- including a $200-million loan through the International Monetary Fund -- at the end of the Group of Seven leaders' summit in Germany.

Leaders of the world's wealthiest democracies struck a united stance to support Ukraine for 'as long as it takes' as Russia's invasion grinds on, and said they would explore far-reaching steps to cap Kremlin income from oil sales that are financing the war.

An Ontario community is reeling after a 23-month-old boy died when he was accidentally left in a hot car outside the school where his mother taught, the mayor says.

Tamara Lich, one of the organizers of the Freedom Convoy, has been arrested in Alberta for alleged breach of bail conditions, CTV News has learned.

A 101-year-old man was convicted in Germany of 3,518 counts of accessory to murder on Tuesday for serving at the Nazis' Sachsenhausen concentration camp during the Second World War.

Mary Mara, an actress known for roles on 'ER' and 'Ray Donovan,' has died, her manager, Craig Dorfman, said in a statement to CNN. She was 61.

Most people in Canada do not think people should have to swear an Oath of Allegiance to the Queen, according to a poll ahead of Canada Day.

'There won't be occupiers': City of Ottawa, police prepared for Canada Day protests

City of Ottawa staff and the Ottawa Police Service are ensuring residents that planned protests on Canada Day will not devolve into the kind of occupation that residents endured this past winter.