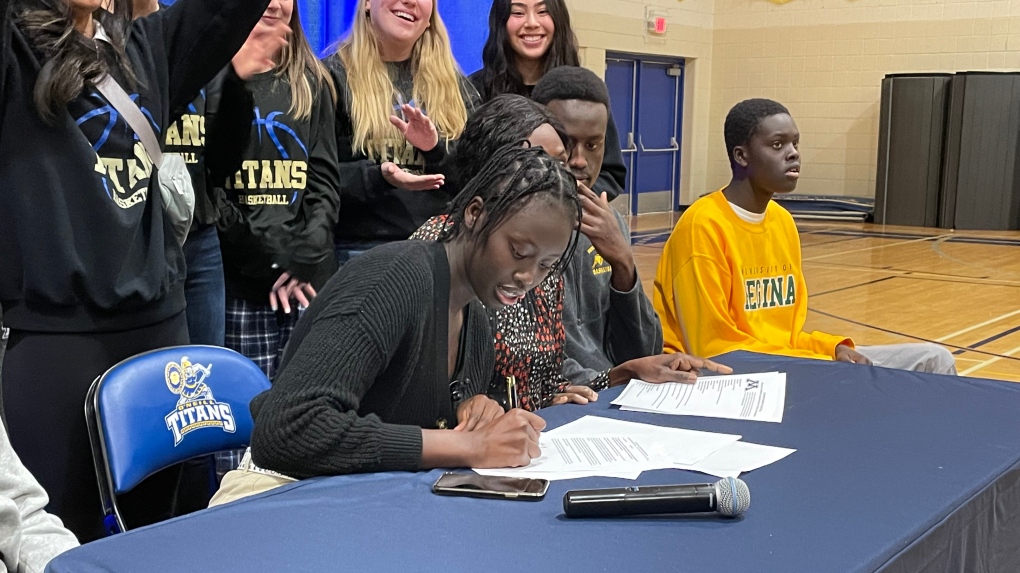 Ajok Madol officially commits to the University of Minnesota in an announcement at Archbishop MC O’Neill on Nov. 15, 2022. (David Prisciak/CTV News)

A Grade 12 student in Regina is making strides in the world of basketball.

Ajok Madol, a guard with the Archbishop MC O'Neill High School Titans, has officially committed to playing for the University of Minnesota in 2023.

For Madol, her commitment to play for the Golden Gophers south of the border is a dream come true.

“I’m obviously very excited because I've been wanting to do this for a long time,” she told CTV News.

“My goal has always been to play Division I basketball.”

Over a hundred students gathered in the gym of O’Neill High School to hear Madol’s announcement.

For Tracy Fuchs, the principal of O’Neill, the occasion was a proud moment for the entire school.

“It’s a big day today, it’s a big moment, a big decision and I certainly know she’s got the blessing of the Titan community,” he said, prior to the announcement.

This is not the first time that Madol has received recognition for her performance.

In March of 2022, she attended the annual Biosteel All Canadian Basketball Game as the sole Saskatchewan product.

According to Madol, this experience, as well as the leadership roles she has taken while playing for the O’Neill Titans, will come in handy going forward.

“Here, I obviously have a pretty large role, because I’m put into that leadership role,” she explained.

“So I will have that experience of being a leader going into playing division one and hopefully lead my team into a championship in the big ten conference.”

Madol hopes to study chiropractics as well as eventually play professional basketball with the WNBA.

For other female athletes hoping to make it to Division I basketball, Madol says the key is constant improvement and confidence.

“Just keep on working,” she said.

“Anything’s possible with hard work and believing in yourself.”