'Every team is in a tough spot': SJHL facing financial uncertainty as return to play talks continue

ESTEVAN, SASK. -- It has been an uncertain 12 months for Saskatchewan Junior Hockey League (SJHL) teams.

COVID-19 cut the last two hockey seasons short, leaving organizations with little to no revenue and constant questions about when, and if, play will resume this year.

After an extended off-season, teams returned to rinks across Saskatchewan in November only to have the season paused after less than a month of play.

Now – almost 12 months after playoffs were put on hold – many SJHL teams are facing financial uncertainty after a turbulent year.

First-year Estevan Bruins head coach and general manager Jason Tatarnic has had his hands full for his first season running the team.

He estimates the organization lost a total of $300,000 in revenue due to the cancelled season.

"For an organization like us, that's big, that’s huge," Tatarnic said.

Bruins season ticket sales for the 2020-21 season have been rolled over for next season. Those losses, coupled with a lack of game day ticket sales, account for around $200,000 lost. 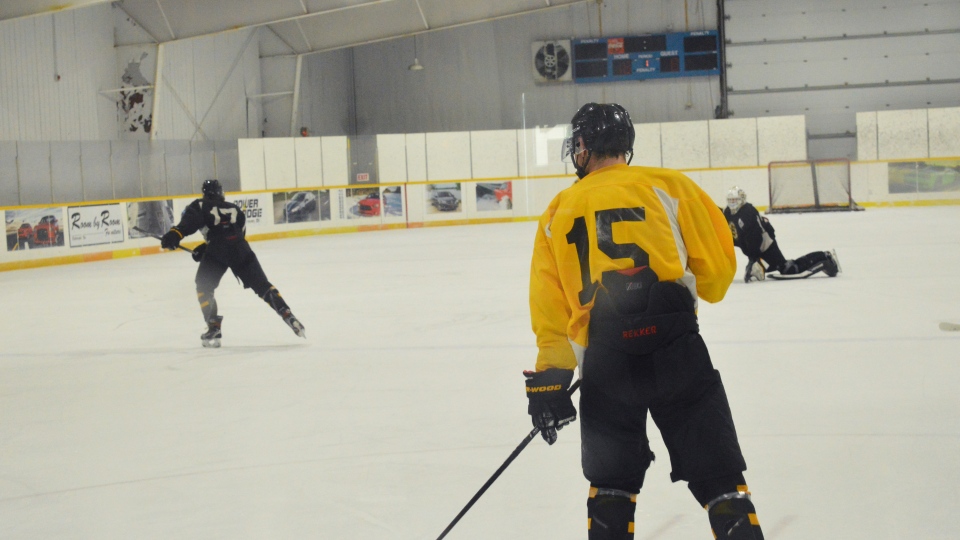 Due to COVID-19 restrictions, SJHL teams were only allowed to hold group skates with a maximum of eight players, 18-years or younger, until recently. (Brendan Ellis/CTV News)

Most SJHL teams do not currently have finalized finance numbers for the 2020-21 season. However after speaking with several coaches from teams across Saskatchewan, the consensus is lost revenues will have a lasting impact.

"I think every team is in a tough spot," Tatarnic said.

To ease the financial burden of the pandemic, the Government of Saskatchewan announced in January that it would be providing $1 million to the SJHL to help keep the league viable. That money will be split equally between the 12 clubs.

"Obviously the money from the government will be a big help and assistance in that goal, but it's up to the individual teams on how they handle that money," Bill Chow, the president of the SJHL, said. "Hopefully they handle it wisely and move forward in the best interest of their organization."

While each club will use the money differently, Tatarnic said teams across the province will need to be responsible with that funding to ensure financial viability down the road.

"Every organization is going to be different," Tatarnic said. "You have to be responsible. You can't take that money and spend it all this year, or there won't be a next year."

With hope of a more "normal" 2021-22 season, some teams are taking a cautious approach to the end of this year.

"The advertisers haven’t received their money’s worth so teams are rolling that advertising into the 2021-22 season. So teams will lose next season’s advertising and the same is happening with season tickets," Johnson said, in an email. "To me this is going to be an issue that we won’t see the end of for two or three years."

"This year obviously hurts, but next year we will really see the impact when we have to roll over season ticket money and corporate sponsorships," Hehr added, in an email.

There is debate between teams on how the government funding is best spent. In Yorkton, Hehr said the government money has helped pay off bills and stopped debt from building up "too significantly." Using that funding on a potential return to play would not be financially viable for the club.

"I think if we were to do a bubble scenario it would have a negative effect on our finances," Hehr said. "With all the restrictions, no matter what, if we were to restart we would be in the hole."

The Melville Millionaires have not yet decided what specifically to use its government funding for, but head coach and general manager Mike Rooney said it will assist with the financial burden the club has already dealt with over the past year and any potential issues down the road.

"It really has to help out with the past, present and future," Rooney said. "We don't know what next year is going to look like. I anticipate that things are going to come off fairly well, but it might not be the start we usually see."

On the other hand, several teams believe they can remain financially viable while returning to play in 2021. The Estevan Bruins and Weyburn Red Wings are two teams that are fully behind restarting the season, if it gets government approval.

"The decision that we made is we're going to fight for a season and get our players back on the ice if we can," Tatarnic said. 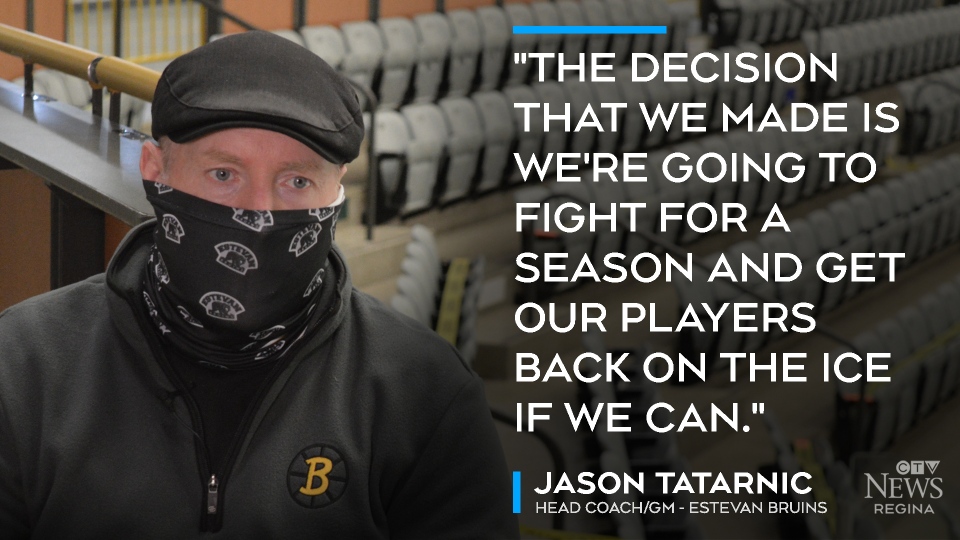 SJHL president Bill Chow said the league has submitted a return to play proposal to the Government of Saskatchewan.

The proposal was based off of the recently approved Western Hockey League (WHL) Hub Centre that is underway in Regina.

"If we were to return to play in a similar situation like the Western Hockey League is in Saskatchewan, then obviously there's a lot of financial commitment to do that," Chow said.

Tatarnic said there is a five member return to play "taskforce" that worked on the proposal that was sent to government.

While the proposal is based off of the Regina hub model, the Bruins' coach noted that the WHL has a leg up on the SJHL when it comes to resources.

Weyburn Red Wings head coach and general manager Rich Pilon said seeing the WHL get approved to return to play gave him hope that the SJHL could do the same.

He sees the funding from the government as a reason to try to get the season going. 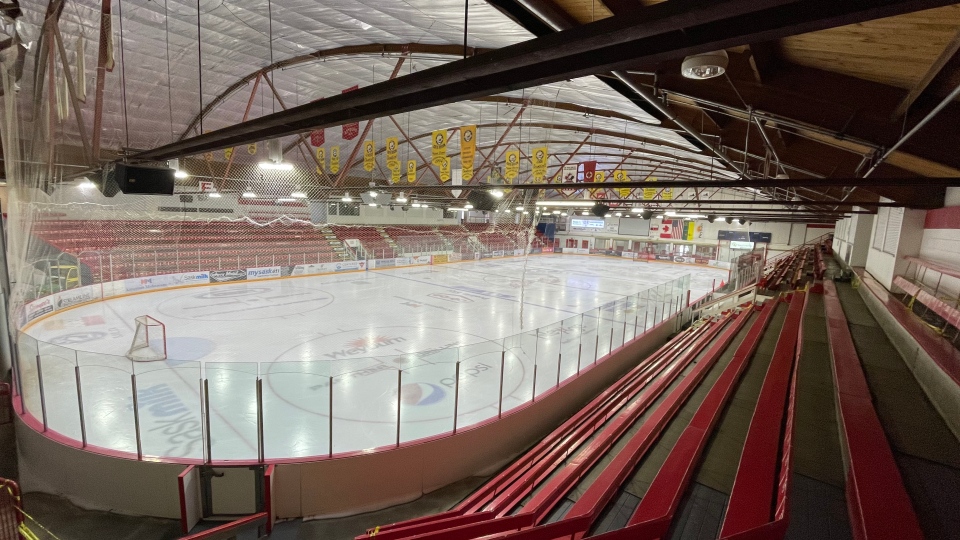 Both Pilon and Tatarnic agree that a return to play would not be possible without the $1 million from the Government of Saskatchewan.

"Without that funding there probably would have been zero thought to trying to get going again," Tatarnic said.

However for some teams, the funding mostly spells survival through the fast-approaching off-season, as many organizations still struggle without their usual fundraising campaigns due to COVID-19 guidelines and restrictions.

"It's huge for a lot of teams," Kevin Kaminsky, the head coach and general manager of the La Ronge Ice Wolves, said. "This will help keep teams afloat for hopefully at least the summer."

The Alberta Junior Hockey League was granted a return to play by the Government of Alberta, and games will resume on Mar. 12, 2021.

Chow said the varying rules between the two provinces makes it difficult for the SJHL to be granted a return to play with the same timelines and guidelines as its neighbour to the west.

The SJHL is proposing a hockey hub model for its return to play, which would see teams play out a short season or tournament all from one to three communities.

"We have to be able to make it financially sound for each organization to move forward or it doesn’t make sense," Tatarnic said.

The WHL is currently operating a seven-team bubble in Regina. Due to the size of the SJHL, Tatarnic said the return to play task force is considering two or three hub centres, if all teams participate.

"It makes it easier to manage. I believe it’s a safer environment. And so, I just think it limits the problems you could face," Tatarnic said.

Tatarnic added teams that are interested in hosting have submitted proposals to the league.

Chow estimates it would cost each team participating in play around $50,000 to $70,000, for a four to six week hub format similar to the WHL.

To preserve some of the government funding, some teams have asked players and their families to contribute to help cover the costs of the hub.

"If we throw everything into the hub, we don't know what's coming tomorrow. But if things get worse then you have to have a float," Pilon said.

Fixed costs each team would have to pay include hotels, ice time, meals, ground transportation and off-ice officials.

"Our view was: it's affordable. The players are going to contribute to that number as well, as will we as an organization. If the number didn’t make sense we wouldn’t go ahead," Tatarnic said.

The Government of Saskatchewan confirmed it is in discussions with the league about a potential return to play.

"We continue to work with the SJHL on their proposal to return to play. No decision has been made," the province said, in the statement.

Whether an adapted end to the 2020-21 season happens or not, the SJHL and its teams continue to look ahead to next season and the challenges the future may hold.

Chow said the biggest challenge for the league will be nailing down an official start date.

"The challenge will be to a positive start, having a date that we can start. Hoping things return to normal somewhat, whatever that will look like and be like," Chow said. "Teams can plan training camps, players can plan training, players can come into communities relatively easy and move forward and have a complete season."

A solid start date in the fall will also help teams financially, according to Millionaires coach Mike Rooney.

"We can't sustain another off-season like it was, we really need to have a definitive start date. It can't just continuously be pushed back and have maybes. We have to get a calendar date, and one that’s going to help us as an organization and our corporate sales and season ticket sales, but it's also going to help the players," Rooney said. 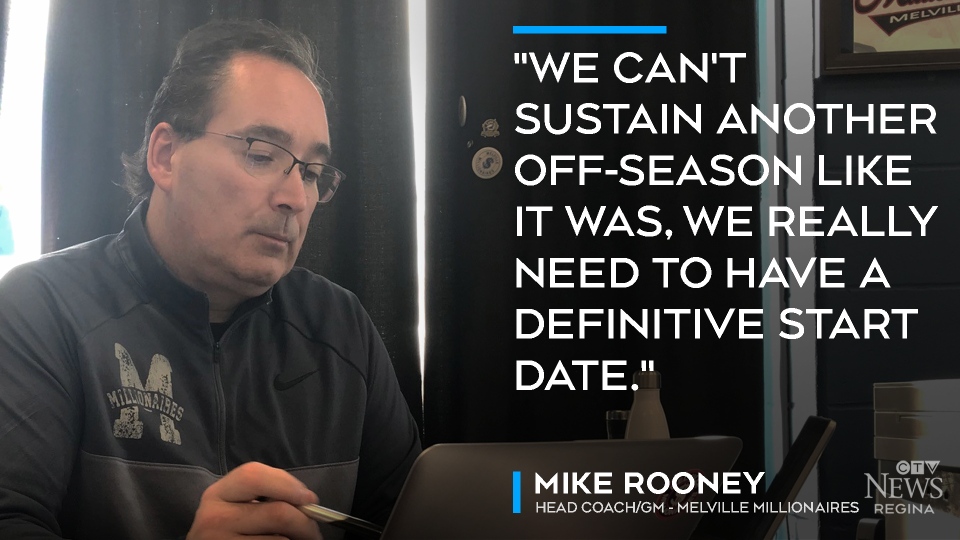 For teams, financial pressures will likely extend through to next season and beyond, as questions still remain as to when play will begin and if fans will be in the stands.

Until many of these details are confirmed, the uncertainty will remain for all 12 SJHL teams as to what the 2021-22 season might hold for them and how their teams will bounce back on and off the ice.

"Are we in dire needs? I think a lot of it will be tested when we go into the fall of this coming season," Rooney said.